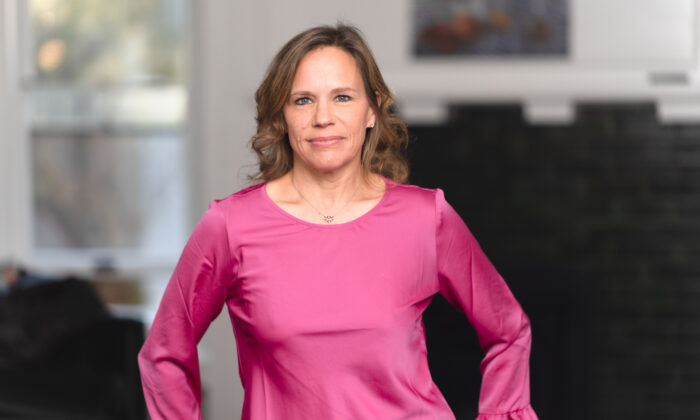 Jennifer Sey, former Levi Strauss and Co. chief marketing officer and brand president, as well as author of “Levi's Unbuttoned: The Woke Mob Took My Job but Gave Me My Voice," in Denver on Nov. 20, 2022. (Jack Wang/The Epoch Times)
By Ella Kietlinska

Ella Kietlinska
Reporter
Ella Kietlinska is a reporter for The Epoch Times focusing on U.S. and world politics.
View profile
and Jan Jekielek

The pose of wokeness is a costume that the left liberal elite puts on to virtue signal that they care about social justice and to hide their greed and corruption, said the former executive of a major brand-name apparel manufacturer.

Jennifer Sey, former chief marketing officer and brand president of Levi Strauss & Co., told EpochTV’s “American Thought Leaders” program that she had “pushed back” on the public school closures due to COVID-19 for two years, and in the end, she was pushed out of the company for her advocacy.

Sey, who was sending her children to public schools, believed that prolonged school lockdowns were harmful to children and started speaking out against them at the beginning of the pandemic.

Sey said she and her husband were reading the data that was coming out of Italy at the start of the pandemic, a country heavily hit by the disease, and the data showed that the median age of death due to the disease was over 80.

“Nobody was bothering to look at actual data or adhere to the pre-pandemic playbook, which said you never shut schools down for more than a couple of weeks,” Sey pointed out. “It was from day one that me and my husband, we both said, ‘Hell no, this is wrong. People are going to be harmed.’”

In September 2020, Sey’s company warned her that her advocacy against school closures could be considered speaking on behalf of the company, “the implication being, there would be reputational harm to the company caused,” she said.

At the same time, her peers began sending their kids back to private in-person schools, Sey continued.

“I was so angry that these people would dare to say to me while sending their own kids to in-person school: ‘You can’t advocate for poor children to be in school.’”

Sey said it was atypical for her peers—and even for employees two or three levels below her in the corporate hierarchy—to send their kids to public school in her city of San Francisco.

“I thought the lightbulb would go off, and people would see the hypocrisy if I just made it clear in a calm, nice way. But they didn’t, because the hypocrisy, in a sense, is the point.”

“This pose of wokeness, it’s a cloak they wrap themselves in to signal virtue … to hide greed, corruption, keeping all the good stuff for themselves,” she said.

“It’s this costume that the left, liberal elite wraps around themselves to say, ‘I care about social justice. I care about all these causes. I am a good person.’ If you threaten to expose that, you need to be banished.”

Sacrificed Career for Speaking Out

Around the time of the new year in 2022, Sey was told that there was no longer a place for her at the company.

“You can’t be the CEO because of the things you’ve been saying and doing. Therefore, you can’t sit in your current chair because that is the role that ultimately becomes the CEO, so you need to leave,” Sey said she was told.

She was offered a $1 million severance package, which she decided to turn down because it would come with the signing of a nondisclosure agreement.

“What the nondisclosure agreement would require is that I never speak about the terms of my ousting. I was not OK with that,” she said.

In February, Sey resigned from her post at Levi Strauss & Co. after almost 23 years with the company.

The Epoch Times reached out to Levi Strauss & Co. for comment.

Sey said the illiberalism that has traveled from college campuses into companies and taken hold of corporations across the country is “incredibly dangerous.”

“If you insist on a culture where free speech is not tolerated, not only is it non-inclusive, which is problematic in and of itself, but I actually think it’s fraught and rife with the potential for corruption and fraud, like we’ve seen with Theranos and FTX and Enron,” she said,

Theranos, a company that claimed to provide blood testing lab services with a single drop of blood, defrauded its investors in a multimillion-dollar scheme. Its founder, Elizabeth Holmes, was recently sentenced to 11 years in prison.

FTX, a Bahamas-based cryptocurrency exchange, recently went bankrupt along with more than 130 affiliate companies due to insufficient liquidity. FTX users are potentially facing $8 billion in cumulative losses, while investors in the company are likely to lose their entire investment as a result of the bankruptcy.

Enron, a Texas-based energy-trading company, went bankrupt in 2001 due to fraudulent accounting practices and conflicts of interest. Within a year, Enron’s stock price plummeted from about $90 per share to 26 cents per share, which caused billion-dollar losses to investors, thousands of job losses, and the liquidation of more than $2 billion in pension plans.

“There were people in those companies who knew what was going on, but they didn’t feel they could say anything,” Sey said.

“If you cannot have a conversation in the company about what is working and what is not working, what is true and what is not, you can’t innovate. You can’t move forward,” she said. “It stands in the way of progress when we can’t have these conversations because we’re all just adhering to propaganda.”

“It is a violation of the spirit of the First Amendment,” Sey added.

Wokeism Is an Ideology

Being “woke” during the 1940s through the beginning of the 1960s meant “being awake or alert to the fact that there was racial inequality, and being part of the movement to change that,” Sey said. “It’s admirable, I have no issue with that.”

However, in the last 10 or 15 years, and especially in the last three to five years, those beliefs have been corrupted and commodified “into an ideology which can never be questioned,” such as gender ideology, race ideology, or body positivity, Sey explained.

Sey said that she was very supportive of transgender people working in her team. “I would never want a person to be discriminated against for anything, including being unvaccinated.”

But someone who questions whether an 11-year-old should be on puberty blockers, when there is no research on the mid- to long-term impacts of this therapy, is considered evil and must be banished for violating this ideology, Sey said.

“[Wokeism] has become religious in nature. Woke capitalism is really just an attempt to profit off of this ideology and the passion behind this ideology amongst primarily Gen Z and millennial consumers,” she said.

Another example of ideology that cannot be questioned is the idea of “body positivity,” which touts that the size of the body does not affect its health, Sey said.

“We couldn’t say during COVID that it was dangerous to be overweight. I said it, and that made me a fat-phobe,” she said.

“We can’t say that, because the mantra is ‘healthy at any size.’ It’s ideological. And you have to be pure in the belief of that ideology, or you are evil and must be shunned.”

Jennifer Sey: Wokeism Is a Costume Elites Wear to Pretend They Care About Social Justice

A study conducted in the spring of 2020 by researchers from the University of Bologna in Italy concluded that “obesity is a strong, independent risk factor for respiratory failure, admission to the ICU, and death among COVID-19 patients.”

Obesity also increases the risk of many serious diseases and health conditions, according to the Centers for Disease Control and Prevention.

“Most people want some sort of a moral framework to help them make decisions so that they can feel virtuous and be good people. And in a world where religion is less and less relevant—and I say this as someone who is an atheist—we still look for those constructs and frameworks elsewhere.”

Sey said there is still a human impulse for religiosity.

“It’s our desire to believe in something and want to be part of something bigger than ourselves and have this framework for how to make good decisions to be a good person,” Sey said. “That’s what I think the impetus is.”

Mimi Nguyen Ly and Liam Cosgrove contributed to this report.