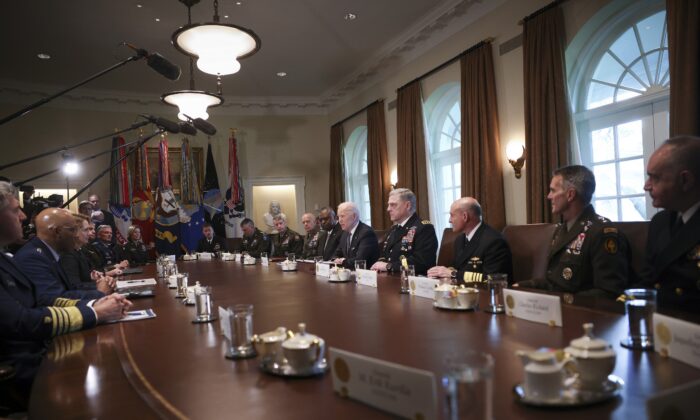 U.S. President Joe Biden meets with senior military members, members of the Joint Chiefs of Staff, and combatant commanders in the Cabinet Room of the White House in Washington on April 20, 2022. (Win McNamee/Getty Images)
By Naveen Athrappully

Republican lawmakers have decried the Biden administration for policies that they say are weakening America’s military through leftist indoctrination and “woke” ideological posturing to appease “Ivy League faculty lounges or progressive pundits.”

“Unfortunately, President Joe Biden and his administration are weakening America’s warfighters through a sustained assault fueled by woke virtue signaling,” said Sen. Marco Rubio (R-Fla.) and Rep. Chip Roy (R-Texas) in a report titled “Woke Warfighters,” according to Fox News. “Our military’s singular purpose is to ‘provide for the common defense’ of our nation. It cannot be turned into a left-wing social experiment. It cannot be used as a cudgel against America itself.”

The report cites several examples of the administration’s stance. One example was Defense Secretary Lloyd Austin’s first action after being confirmed by the Senate, which included signing a “racism” memorandum. The message directed all service members and Department of Defense civilian employees to conduct a “one-day stand-down” to discuss extremism within their ranks.

This was despite the fact that in a force of more than 2.1 million active and reserve members, there were only 100 such cases of alleged “extremism,” according to data collected by the Biden administration.

“The world is a dangerous place, and the Biden Administration’s insanity is eroding our greatest source of security in it,” said the report, citing the military’s promotion of Marxist critical race theory, sex reassignment procedures, and transgender ideology, as well as the punishment of those who oppose such things.

Another example was that of Bishop Garrison, who currently serves as Austin’s senior adviser on human capital and diversity, equity, and inclusion issues. The report said that Garrison promoted the “1619 Project,” which is based on a falsified history of the United States and part of a revisionist education being taught in some schools across the country.

Another case cited in the report was that of Kelisa Wing, the chief diversity, equity, and inclusion officer at the Department of Defense Education Agency.

“Wing also wrote a book to teach white children that they have white privilege and that ‘white privilege hurts a lot of people.’ The book comes with an exercise to help kids understand ‘what parts of my identity have provided me with privilege.’”

Rubio and Roy pointed out that the U.S. military has historically not accepted candidates who do not meet certain physical and mental criteria, and some of the disqualifying conditions include allergies to peanuts or gluten, learning disorders, acute depression or anxiety, and skin diseases like eczema and psoriasis.

“People cannot even enlist with Invisalign or braces until they are removed,” the report states. However, recent developments have the military forces “proudly promoting and celebrating sex reassignment procedures, which can have months-long recovery periods, with complete recovery taking ‘up to one year’ for some procedures.”

The report cites Thomas Spoehr of The Heritage Foundation, who said that because people with gender dysphoria are more prone to mental health issues, other service personnel “will be reluctant to rely on them” because of these issues, which would result in a section of “non-deployable service members.” This could also lead to resentment within the ranks as some members will never be “called upon to deploy,” the report states.

The Biden administration allows members to “transition” while on active duty, and allows individuals to use shower and bathroom facilities of their choosing. Military members are now being trained in the use of appropriate pronouns and “when to recommend their subordinates consider gender reassignment surgery,” said the report.

The report concluded with the Afghanistan withdrawal, which resulted in the deaths of 13 U.S. service members. The United States also left behind billions of dollars’ worth of equipment, including 2,000 armored vehicles and up to 40 aircraft, which the Taliban seized and paraded.

“No one faced consequences. Rather, the Biden Administration continued undermining the military with woke ideology and ignored its failure. The only service member who received a reprimand from the Afghanistan debacle was a lieutenant colonel who criticized the way the withdrawal was executed,” the report stated.

The GOP report accused the administration of hypocrisy for the lieutenant colonel’s treatment when compared to a junior medic in uniform who used the Chinese messaging app TikTok to criticize the Supreme Court’s decision to overturn Roe v. Wade.

The medic asks in the video, “How am I supposed to swear to support and defend the Constitution and a country that treats its women like second-class citizens,” adding “I will not rest, and I will not be silent, because this is an attack on women in this country.”

The report states that the medic has not received any disciplinary action for her remarks.

Chiefs Push Back on Criticism

In 2021, the service chiefs for the Navy, Marine Corps, and Coast Guard rejected the assertion that the armed services are getting progressively “woke.”

“I think it’s an assertion that isn’t really grounded on facts,” Chief of Naval Operations Adm. Mike Gilday said at a naval conference in 2021. “We know that there’s strength in diversity; that is a scientifically proven fact.’’

The Epoch Times has reached out to the Department of Defense and its education agency.

U.S. Army officials confirmed on Sept. 30 that the Army failed to meet its recruitment goal of 60,000 personnel as the service branch only recruited about 45,000 soldiers during the 2022 fiscal year.

“In the Army’s most challenging recruiting year since the start of the all-volunteer force, we will only achieve 75 percent of our fiscal year 22 recruiting goal,” Army Secretary Christine Wormuth said in a statement.