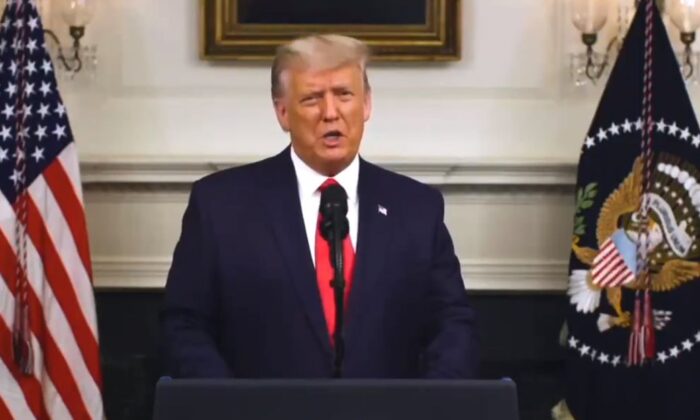 With Our Election System Under Assault, Americans Need to Speak Up

On Dec. 2, President Donald Trump delivered a speech that detailed some of the abuse and fraud in the 2020 general election, saying: “As president, I have no higher duty than to defend the laws and the Constitution of the United States. That is why I am determined to protect our election system, which is now under coordinated assault and siege.”

Our country was founded under George Washington’s leadership, as he led our army to win the War of Independence. We were fortunate to have President Abraham Lincoln, who kept us united by leading us through the Civil War. Now, our country faces a third fundamental challenge, one to ensure our continued freedom and the right to elect our leaders.

Following the Sept. 11, 2001, attacks, our country quickly transitioned—as reported in the media—from “America Under Attack,” to “America Recovers,” to “America Fights Back.”

Trump’s speech signaled a similar turning point, that America is defending its fundamental rights. His speech laid out what is happening to our country at the moment: widespread and well-planned election fraud. As Trump pointed out, this is not about himself, but “about our democracy and the sacred rights that generations of Americans have fought, bled, and died to secure.

“Nothing is more urgent or more important,” he said.

The president continued by saying: “If we don’t root out the fraud, the tremendous and horrible fraud that’s taken place in our 2020 election, we don’t have a country anymore. With the resolve and support of the American people, we will restore honesty and integrity to our elections. We will restore trust in our system of government.”

In perhaps a more complicated environment than there was during the War of Independence, or the Civil War, America faces an enemy that’s part of a global network, consisting of communist forces both abroad and within our own country.

Communist China has engaged in a form of unrestricted warfare against the United States for the past few decades. The Chinese Communist Party (CCP) sees the world leader in freedom, America, as the biggest threat to its existence. The goal of the global communist alliance, and their only means of survival, is to take over the United States and, with that, snuff out the beacon of freedom that America shines on the world. The CCP has engaged in a systematic penetration of our institutions and has built ties to pro-communist forces within our country.

Globalization is a communist movement. It is an intentional strategic move with the goal of weakening the free world, especially America, and aiding the objectives of communists. In this movement, international communists have partnered with Chinese communists. After decades of work, it has reached a point where it has become strong enough to orchestrate a communist coup in America.

In recent decades, partisans in favor of globalization and socialism have, by providing continued financial support, not only helped to extend the life of communist rule in China, but have enhanced it.

What happened in Hong Kong this year, where the CCP seized full control, is now happening here in the United States.

Domestically, we have mainstream media, big tech companies, and other powerful interests in the government, for-profit, and nonprofit sectors working together against a U.S. president.

Mainstream media organizations are refusing to look at the election hearings currently taking place in battleground states across the country and instead continue to describe the credible allegations and evidence of fraud as “baseless.”

This has cut off many people from knowing even the most basic facts about this election. Most American media has become no different from the state-controlled media in China—they offer only lies and coverups, and their agenda is to brainwash with propaganda.

Furthermore, big tech companies in the West have shut down people’s communication in ways no different from those seen in communist China. Contrary to what these companies claim, social media have become a machine to control communication rather than platforms for open discourse.

Major governmental agencies—supported by our tax money—show no interest in investigating the credible allegations and evidence of large-scale election fraud. They have stood idly by as forces in our country have coordinated with communists internationally to launch a coup.

Many of us here at The Epoch Times have lived under communist regimes, both in China and other parts of the world, and know firsthand its tyranny. Our freedoms in America have allowed us to flourish and also to warn our fellow citizens that these very freedoms are now at risk.

If we don’t take a stance and speak out at this critical moment, we will see the CCP and its allied communist forces complete their decades-long quest to subdue American freedom.

During the Sept. 11 attacks, 40 Americans on Flight 93 fought the terrorist hijackers to defend the nation’s capital. These were ordinary people taking extraordinary action. They were brave Americans. Before they took action, they voted. Even at the moment of a life-and-death test, on a hijacked plane, they voted.

The 2020 general election is exposing the true position of every individual, every company, every media outlet, and even every country across the globe.

At a hearing on election fraud in Michigan on Nov. 27, witness Melissa Carone was asked why more people had not come forward to testify. Her answer: “My life has been destroyed, my life has been completely destroyed, because of this. I have lost family, I have lost friends. I have been threatened. My kids have been threatened. I have had to move. I have had to change my phone number.”

But in spite of having faced this hostility, she came forward to publicly testify. She bravely put the country’s good above her own situation.

During our War of Independence, Thomas Paine said, “These are the times that try men’s souls.”

Not just Carone, but all Americans face this test: Do we love freedom, and are we willing to oppose the communist forces seeking to take it away? When the CCP moved to take control over Hong Kong, Hongkongers protested in the millions, but they were overmatched. On the streets, they waved the American flag, the symbol of freedom.

In the test we face today lies the fate of the world. The forces of evil want to see us surrender. The American tradition teaches meeting tyranny with defiance and threats with courage. It teaches drawing on the resources of faith to counter evil.

At this critical moment, Americans need to come together to take a stand against fraud and in favor of truth. To choose freedom over communism, and good over evil.