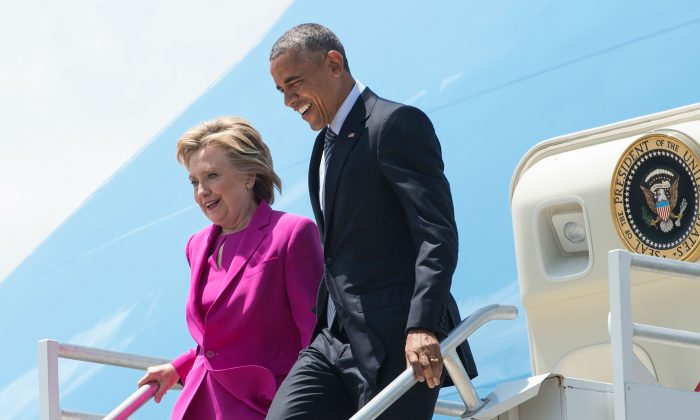 In his endorsement, Obama may see a way to protect his legislative work and legacy, such as health care reform, from a potential Trump presidency.

At the Charlotte campaign rally, Obama made it clear that he will “pass the baton” of his presidency to Clinton: “I’ve run my last campaign, and I couldn’t be prouder of the things we’ve done together. But I’m ready to pass the baton. And I know that Hillary Clinton is ready to run this race.”

The effectiveness of Obama on the campaign trail for Clinton comes down to a number: his approval rating. In the latest Gallup Poll—which tracks presidential approval on a weekly basis—Obama is polling at 51 percent favorability.

“As a loose rule of thumb, the presidential party wins the presidential election when the president’s approval is above 50 percent,” wrote Robert S. Erikson, co-author of “The 2012 Campaign and the Timeline of Presidential Elections” and professor of political science at Columbia University, in an email to Epoch Times.

“Not so if below,” Erikson said.

Obama’s approval numbers have crested at just over 50 percent since the primary season started, and it’s the first time he’s managed to gain a majority of support since 2013.

The “rule of thumb” regarding 50 percent has proven true in several presidential elections in the last 30 years.

Bill Clinton won the 1992 election after economic turmoil in the summer of ’92 led to the George H.W. Bush’s lowest approval rating of his term—29 percent on July 31, 1992.

Bush, who was first elected as Ronald Reagan’s vice president, averaged a 60 percent approval rating throughout his term as president, but this downturn in his approval at a critical time, coupled with an uptick in unemployment, were contributing factors to Clinton’s win.

By the time of the November election, Bush’s approval rating had climbed back to 37 percent, it wasn’t enough to get him the vote.

Sen. John McCain (R-Ariz.) distanced himself from George W. Bush’s presidency, which had seen a fall in popularity in the months leading up to the 2008 election.

In July of ’08, Bush had an approval percentage of 31 percent and by October it had dropped to 25 percent.

McCain lost the election to Obama by a sizable margin after Democrats tied McCain to the unpopular Iraq War and the housing crisis that had lead to massive layoffs and the largest world-wide recession since the Great Depression.

The exception to the rule, however, is the 2000 election between Al Gore and George W. Bush. Then-president Bill Clinton had approval ratings in the mid-60s when he left office, yet Gore, his successor and vice president, lost the election.

Gore decided to distance himself from Clinton after the Lewinsky scandal and impeachment. It’s one of the more confounding decisions by a presidential nominee, which has vexed political analysts, considering how close the election was.

While Gore won the popular vote in the election, he lost the electoral college after a recount in Florida. It’s unclear whether Bill Clinton’s inclusion into the Gore campaign would have hurt or helped him in the general election.

Obama has seen a surge in polling numbers since the beginning of the primary season, and this is the first time his approval rating has reached above 50 percent since 2013.

“Obama looked good in comparison to the Republicans,” said Maurice Carroll, assistant director of the Quinnipiac University Polling Institute, in a telephone interview.

By contrast, the Republican primary season looked “remarkably un-presidential,” Carroll added, and Obama benefited by getting a bump up in support.

High favorability gives Clinton the permission to run as a “third term” candidate—to embrace and continue Obama’s legacy without having to disassociate herself.

Republican pollster for the 2012 Romney and Ryan campaign Neil Newhouse said, however, that Clinton “needs all the help she can get.”

“There’s no arguing that Obama is significantly more popular than she is,” Newhouse said.

“While her campaign hopes to use Obama’s recent rise in approval to her advantage, it’s a stretch to believe that his popularity is going to transfer, in even a small way, to her.”