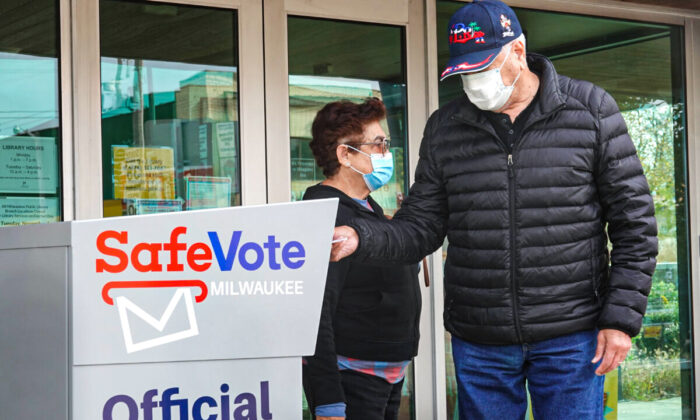 Residents drop mail-in ballots in a ballot box outside of the Tippecanoe branch library in Milwaukee on Oct. 20, 2020. (Scott Olson/Getty Images)
By Mimi Nguyen Ly

The Wisconsin Supreme Court ruled that it will allow a ban on absentee ballot drop boxes to be in effect for the state’s April 5 election.

The 4–3 decision (pdf) on Feb. 11 upholds a lower court’s ruling in mid-January, in which Waukesha County Circuit Court Judge Michael Bohren ruled that absentee ballot drop boxes are illegal in Wisconsin. The lawsuit was brought by the Wisconsin Institute for Law and Liberty on behalf of two voters from Waukesha County.

A Wisconsin appeals court issued a stay of Bohren’s ruling in late January, thereby allowing drop boxes to be used for the Feb. 15 Wisconsin primaries, because it was happening so soon. The Wisconsin Supreme Court upheld that stay.

The latest Wisconsin Supreme Court ruling denies a request from the Wisconsin Elections Commission (WEC) and other groups to extend the stay. According to the court’s majority, there’s enough time for the WEC to comply with Bohren’s order for the April election.

“The record before us, including the timetable for making the necessary administrative changes as outlined by the court of appeals, indicates that the Commission can comply with the circuit court’s order so as to ameliorate concerns about voter confusion and election administration before the April 5, 2022, election commences,” they wrote.

“The Commission [WEC] and intervenors have not demonstrated that irreparable injury or substantial harm to interested parties or the public interest will result if a stay is not extended through the April 2022 election and beyond. … The need for additional relief in the form of an extended stay has not been established.”

The latest ruling isn’t final. As such, whether drop boxes will remain for the state’s August primary and November general election is uncertain.

The majority wrote in their Feb. 11 order, “[W]e have yet to hear oral arguments, which will be addressing the merits of the issues.”

In 2020, some voters across the United States opted to use drop boxes to cast their ballots amid the spread of COVID-19, the disease caused by the CCP (Chinese Communist Party) virus, also known as the novel coronavirus.

At the time, many Republicans and conservatives spoke out against the drop boxes, citing concerns that they could increase the chances of fraud, while Democrats and liberals said drop boxes helped maintain or increase voter turnout amid the COVID-19 pandemic.