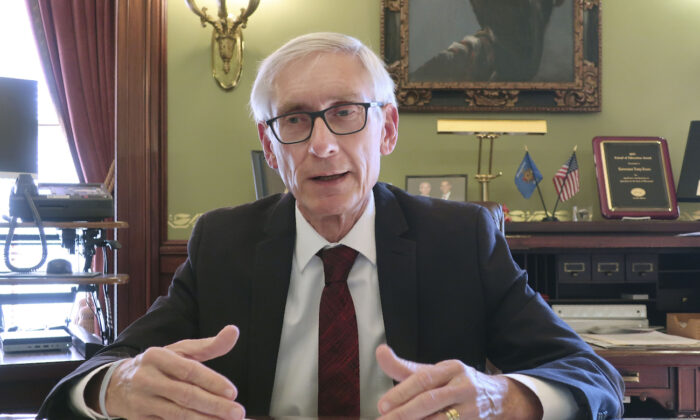 Wisconsin Gov. Tony Evers announced Friday he vetoed five bills that would restrict access to abortion in the state.

The governor is making abortion a major issue for his 2022 reelection campaign, vowing to quash any pro-life bills put before him.

“I’ve said it before, and I’ll say it again today: as long as I’m governor, I will veto any legislation that turns back the clock on reproductive rights in this state—and that’s a promise,” he said on Twitter Friday.

In a separate video Friday, Evers accused Republican lawmakers across the United States of “attempting to create laws restricting women’s right to choose and cutting access to women’s health care.”

All five Wisconsin pro-life bills were written by Republicans, who do not have enough votes in the legislature to override Evers’s vetoes. Most of the five bills had been similar to those vetoed by Evers two years ago.

In October, when the Republican-controlled Wisconsin Assembly gave final approval to the five bills, Republican lawmakers said they were trying to pass them in part because there may be a chance Evers would change his mind. Meanwhile, all Democrat lawmakers voted against the bills.

One of the bills, the Shield the Vulnerable Act, sought to ban a person from performing an abortion if the person knows the woman is seeking an abortion solely because of the unborn child’s sex, race, or diagnosis of a congenital disability, such as Down syndrome. Evers had vetoed the measure in 2019.

The bill would also allow a claim for damages for violating the measure to be brought by other parties, such as the father of the unborn child or family member.

In a letter (pdf) to the Wisconsin Senate, Evers said the measure would “substantially erode and interfere with the patient and provider relationship by encouraging health care professionals to evaluate and even question the bases of patients’ decisions.”

“I am vetoing this bill in its entirety because I object to politicians interfering between patients and their health care providers … I trust women to make the best reproductive health care decisions for themselves and their families,” he told lawmakers.

Republican state Sen. Julian Bradley in a statement, “Killing an unborn baby because of their sex, race, or disability is not health care. This is a radical, pro-discrimination veto from Governor Evers. Wisconsinites deserve to know life is valued whether they are a man or woman, white or black, or have a disability.”

Republican state Sen. Patrick Testin, who sponsored the bill, said in a statement he was disappointed in Evers’s veto. “Deciding who deserves to be born based on their inherited characteristics is discrimination … Wisconsin must affirm that every life has equal meaning and purpose.”

Another bill that was vetoed, the Prenatal Diagnosis Information Act, would have required doctors to alert parents of the unborn child if the child tests positive for a congenital condition, and provide information about the condition.

A third measure, A Woman’s Right to Know Act, would require doctors to tell any woman seeking a medication-induced abortion that there is a timeframe in which the effects of the first pill can be counteracted if they change their mind and want to continue the pregnancy.

The assertion that a medicine-induced abortion can be reversed has been criticized by the American College of Obstetricians and Gynecologists and the American Medical Association as not based in science and potentially threatening to the patient’s life.

Evers also vetoed a bill that would require doctors to provide care for a child that survives an attempted abortion. The bill, which he had vetoed in 2019, would make violators guilty of a felony punishable by up to six years in prison.

The same bill would have made the act of intentionally causing the death of a child born alive after an abortion attempt a felony punishable by life in prison.

A fifth bill would reduce funding for abortion providers by prohibiting the state from certifying them as a provider under Medicaid. There would be exceptions in cases of sexual assault or incest, or if the woman’s life is in danger.

The Wisconsin governor’s veto of the five bills comes two days after a case that could overturn Roe v. Wade was heard in the U.S. Supreme Court.

A Wisconsin law enacted in 1849 made abortion illegal, allowing prosecutors to charge doctors with felonies for performing abortions, but it has been unenforceable since the Roe v. Wade decision. That law would take effect again if Roe v. Wade is overturned.