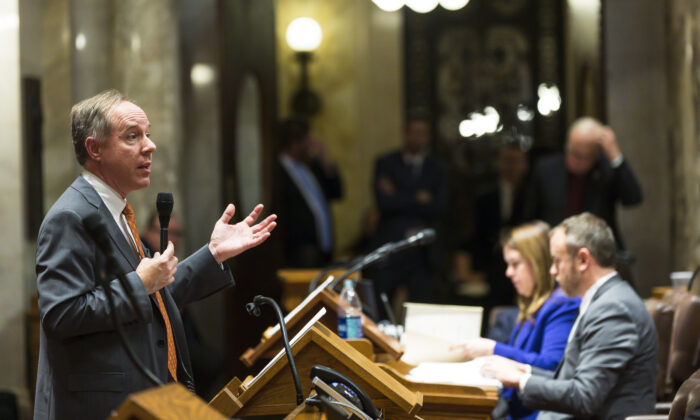 Wisconsin Assembly Speaker Robin Vos fired Michael Gableman more than a year after hiring the former Wisconsin Supreme Court justice to investigate the 2020 election amid allegations of fraud and irregularities.

In an Aug. 12 statement, Vos, a Republican, said he’s seeking to close the Office of Special Counsel, which had been created in July 2021. The election investigation, which documented numerous instances of misconduct during the 2020 election, cost taxpayers more than $1.1 million, not including any attorney fees.

“After having many members of our caucus reach out to me over the past several days, it is beyond clear to me that we only have one choice in this matter, and that’s to close the Office of Special Counsel,” Vos said. “For those like me who remain concerned about ensuring we have election integrity, we have a simple solution; to focus on our efforts to elect a Republican governor in November so we can pass the bills that were vetoed by Governor Evers.”

Vos’s office later released Gableman’s termination letter (pdf), in which Gableman was told “not to engage in any further activities with regards to the Office of Special Counsel or as a representative of the Wisconsin State Assembly” and to return “any and all records” to the Wisconsin Assembly Chief Clerk’s Office.

“This ends your employment by and association with the Wisconsin State Assembly,” Vos wrote.

The firing comes just three days after Vos narrowly survived a primary election challenge from an opponent endorsed by Gableman, as well as former President Donald Trump for his Republican-leaning State Assembly 63rd District seat. Vos won the primary by 260 votes, likely securing his reelection. Soon after he won, Vos criticized Gableman, calling him “an embarrassment to the state.”

In a robocall for Vos’s opponent, Adam Steen, a day before the Aug. 9 primary election, Gableman alleged that Vos “never wanted a real investigation into the 2020 election in Wisconsin.”

“Everything that my office and I have been able to do to expose all the corruption that took place has been in spite of Robin and not because of him,” Gableman said.

Biden, a Democrat, was declared the winner of Wisconsin’s popular vote by 0.6 percent, or nearly 21,000 votes.

Democrats and local media outlets in Wisconsin have often criticized Gableman’s review of the election, claiming it to be “partisan.” Wisconsin Democrats said in an Aug. 12 statement that Vos should resign from office for having backed a “sham” investigation “all at taxpayer expense.”

Election Investigation Paused Since May

Vos put Gableman’s investigation on hold in May, pending the resolution or settlement of at least five ongoing lawsuits related to the investigation.

Three lawsuits were related to Gableman’s capacity as an investigator to compel testimony from local officials and elections officials in the state after he filed subpoenas against the head of the Wisconsin Elections Commission (WEC)—which administers and enforces election laws in the state—and the mayors of several major cities.

Another two lawsuits were open records cases brought and won by American Oversight, a left-leaning judicial activist group that appears to exclusively target Trump and Republican interests. Both Gableman and Vos were held in contempt at various points during the lawsuits for not having turned over documents that were requested as a part of the investigation. Judges in the two lawsuits recently awarded a combined $261,000 in legal fees to American Oversight, to be paid for by taxpayers.

Gableman’s attorney, James Bopp, told the Wisconsin Examiner in March that the release of documents sought in the lawsuits must be blocked so as to not tip off any individuals who were being investigated, including election officials.

Vos said in May that Gableman’s salary of $11,000 a month would be cut in half during the investigation’s pause.

Gableman’s contract had been renewed in March, April, and May, with the latest contract having no expiration date but stating that either Vos or Gableman could terminate the agreement via written notice.

In an interim report released on March 1 (pdf), Gableman said numerous instances of lawbreaking occurred in Wisconsin during the 2020 election and suggested that Wisconsin lawmakers should “take a very hard look” at decertifying Biden’s win in the state by pulling back Wisconsin’s 10 Electoral College votes.

He wrote in the report that there had been numerous votes cast by mentally incompetent nursing home residents, noncitizens, and ineligible felons. He also wrote that municipal and county clerks violated state law by using unstaffed absentee ballot drop boxes.

The former justice alleged that the WEC had violated state laws by issuing unlawful guidance to local election officials, telling them to disregard state statutes that regulate absentee voting.

Gableman also expressed concerns that private grant money from a Mark Zuckerberg-backed foundation had influenced municipal officials in Wisconsin’s five largest cities, with most of the millions of dollars being spent on voter registration drives, absentee voter efforts, and “Get Out the Vote” campaigns designed to serve certain favored groups, which he said violated equal protection clauses of the state and federal constitution “by failing to treat all voters the same in the same election.”

In a list of suggested reforms, Gableman recommended that the WEC be abolished, that outside money and personnel be barred from involvement in election administration, and that local election officials be better trained to understand their powers, duties, and rights. He also presented the legal rationale for decertifying Wisconsin’s 10 electors who voted for President Joe Biden.

The March report was the last one delivered to the state Legislature before Gableman’s termination on Aug. 12.

Vos told local media outlets after meeting with Republican activists on March 16 that he doesn’t believe the 2020 presidential election can be decertified. However, Vos also said that he believed “there was widespread fraud.”

“While decertification of the 2020 presidential election is theoretically possible, it is unprecedented and raises numerous substantial constitutional issues that would be difficult to resolve. Thus, the legal obstacles to its accomplishment render such an outcome a practical impossibility,” Gableman wrote.

Two other investigations into the 2020 election in Wisconsin—carried out by state legislature agency the Legislative Affairs Legislative Audit Bureau (pdf) and the conservative, libertarian judicial activist group Wisconsin Institute for Law and Liberty—have found no evidence of widespread election fraud. However, the latter group found that the number of votes cast illegally in Wisconsin in the 2020 presidential election almost certainly exceeded the nearly 21,000 vote margin of victory for Biden.

Steven Kovac, Jack Phillips, and The Associated Press contributed to this report.