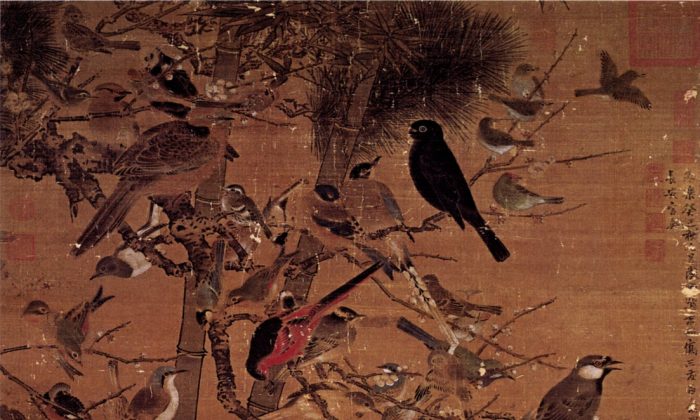 Winter in the Northern Hemisphere officially starts at the winter solstice on Dec. 21 or 22 this year, depending on the time zone. For those of us who live in this part of the world, even as the weather gets colder we can look forward to the days getting longer, the nights getting shorter, as well as the beauty and fun of the winter season.

In celebration of the December solstice 2015, here are some wise idioms and sayings from traditional Chinese culture that will warm your heart.

“As lovely as the winter sun,” is the refrain of one Chinese idiom. It is used to describe those with a manner so kind and gentle that it makes others want to approach them and be close to them. They are like the sun that shines in a winter sky, which brings people the type of warm feeling one has when in the company of someone close and dear.

“In the cold of winter, embrace/cherish ice; in the heat of summer, grasp/master fire,” another Chinese saying goes. When we meet with difficulties, hardship, or failure in life, we may start to feel blue. If this happens, remembering this saying can help us feel encouraged and firm up our resolve. We may then be better able to find the inner strength and tap into resources available to us that will let us overcome our tribulation.

In the cold of winter, embrace/cherish ice; in the heat of summer, grasp/master fire.
— Chinese idiom

For Parents, Sons, and Daughters

The idiom “in the winter, [make] warm; in the summer, [make] cool” speaks to all sons and daughters about the virtue of filial piety, teaching us how to respect and care for our parents. The idiom originates from the ancient text “Liji,” or the “Book of Rites,” a collection of writings by Confucian scholars that describe the rules of conduct and ceremonies of the Zhou Dynasty (1046–221 B.C.).

The original passage in “Liji” states: “The rule of propriety for all sons [offspring] is this: In the winter, warm [the bed for your parents], while in the summer, cool [the bed]. In the evening, put everything in order [for your parents’ rest], while in the morning, inquire [about their health]. When in the company of peers, do not quarrel.”

The last part of the rule reminds the younger generation of an important guideline for living in harmony with others, including one’s siblings, so as not to displease one’s parents or cause them distress or worry. This is part of being a dutiful son or daughter.

In ancient Chinese lore, three plants stand out from the rest in their charm and endurance as winter deepens and the weather gets colder: the pine, bamboo, and plum.

In the long history of Chinese culture, these three are respectfully known as the “Three Friends of Winter,” or literally the “Three Friends of Cold Weather,” as the ancient Chinese used the term “time of cold” to express the idea of winter. This term is also a poetic metaphor used to describe a world in chaos or troubled times, or indeed the mortal world itself where humankind exists.

The pine, bamboo, and plum are alike in their steadfast perseverance and resilience in the harshness of winter.

The pine, bamboo, and plum are alike in their steadfast perseverance and resilience in the harshness of winter. They do not wither like many other plants do. Instead, they remain standing proud and determined, reminding people of the promise of spring and renewal and of the bright future to come. They are a symbol of integrity and noble character, and in Confucian tradition they are held in high esteem as representing the ideal qualities of a gentleman.

In particular, the evergreen pine displays a dignified personality that conveys a sense of peacefulness and stability. It is always fragrant and green, with a straight, and sturdy tall trunk that looks as if it is capable of reaching the sky, like an upright human being. The pine is also a symbol of longevity due to its ability to withstand and even flourish in severe environments.

In Chinese culture the pine is frequently paired with the cypress to refer to virtuous gentlemen. As recorded in “The Analects” of Confucius (551–479 B.C.), the sage said, “It is when the weather turns cold that we know how the pine and cypress are the last to fade away.” This is the origin of the saying “knowing the pine and cypress in winter,” which also expresses the idea that only through a severe and rigorous ordeal can a person’s true character be seen.

The Strong and Flexible Bamboo

The bamboo, for its part, is a symbol of elegance, purity, and broadmindedness. It has a personality that is modest yet with a strong sense of self-esteem. It is not afraid of cold, heat, or wind, and despite ups and downs in temperature and changes in weather it continues to grow ever more green and upright. It is strong and durable, resilient and flexible, able to bend and adapt to any circumstance.

The ancient Chinese likened the bamboo to the cultured qualities of a scholar-gentleman, and many scholars used to enjoy living among bamboo.

Song Dynasty poet, calligrapher, and statesman Su Shi (A.D. 1037–1101), also known as Su Dongpo, loved bamboo so much that he once noted: “I would rather go without meat in my meal than live in a place without bamboo. Having no meat will make one thin, while having no bamboo [where one lives] will make one coarse/vulgar.”

Plum Blossoms in the Snow

As for the plum tree, its vibrant blossoms are much loved as they bloom with grace in the midst of winter, even when snow is still falling and frosty cold lingers in the air. They serve as early, cheerful heralds of spring.

The plum tree is admired for its strong, courageous, and clean-living character and its lofty endurance. It does not yield to the elements. Embracing a life of quiet simplicity, it preserves a purity of body and spirit and stands as a sign of the boundless vitality of spring and a symbol of hope for humankind.

That the plum, bamboo, and pine are so able to move people’s hearts perhaps speaks to the noble character and spirit they embody that indeed reflect the true nature and knowing side of human beings themselves.

So when the weather turns bitterly cold or when a tough situation arises, perhaps keeping these honoured gentlemen of winter and ancient sayings in mind will help to bring you courage and wisdom as well as warm your heart.