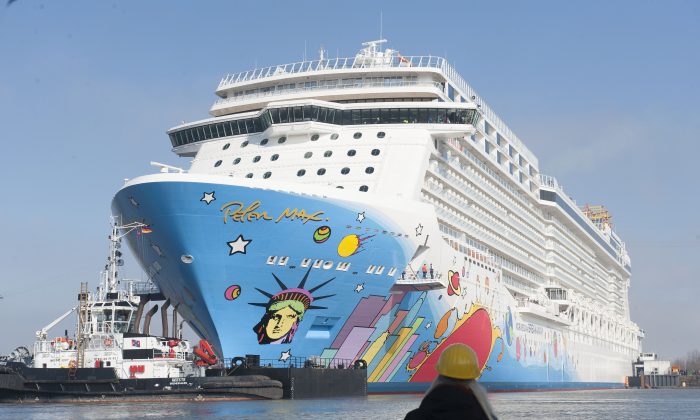 Cruise ship passengers got the scare of their lives while traveling on the Atlantic near New York as Thursday’s sudden winter storm battered the area.

Twenty-one members of the ross family, from Stony Brook, New York, recalled the experience to CBS News. They were on board the Norwegian Breakaway en route to New York from the Bahamas when they ran into the storm.

Their cruise ship, which was carrying 4000 passengers, sailed straight into the “bomb cyclone” earlier on Tuesday night. They suffered for two days as the ocean waves swelled up to 30 feet high.

“When you’re on a boat in the middle of the ocean and water is pouring down the stairs, you’re thinking ‘this is not going to end well,” Karoline said told CBS.

Dell Ross said the storm was so bad that water was coming inside the ship and was becoming a problem.

“Our room was full on two inches of water. The elevator shafts were dripping water everywhere,” Del told CBS.

Another passenger on the ship, Christina Mendez, wrote on Facebook that the waves were “towering” over her balcony.

“My current view. I am on deck 11 and those waves are towering over my balcony. Continue to keep the staff and passenger in your prayers. Going on 12 hours of extremely bad sea conditions heading towards NYC,” she wrote in a post on Thursday.

Mendez also posted a video showing what appears to be a doorway with towels placed underneath, in order to block the water. Other footage shows her balcony full of ice, as the ship rocks precariously back and forth.

According to the Daily Mail, the Norwegian Cruise Liner made no mention of the passenger’s harrowing experiences in an initial statement, saying that there was an unexpected delay.

Only later the company released another statement apologizing to the passengers for their “discomfort.”

“During the early morning hours of January 4, Norwegian Breakaway encountered stronger than forecasted weather conditions due to winter storm Grayson during the trip’s return to New York from the Bahamas. All guests and crew are safe. We sincerely apologize to our guests for these stronger than expected weather conditions and any resulting discomfort they may have experienced,” the statement said.

According to CBS News, water poured down from the ceiling and many passengers described the seasickness and panic through the ship. Passengers finally arrived in NYC on Friday, Jan. 5.

“I’m completely traumatized,” fellow passenger Emma Franzese told CBS when the ship docked. “I’ll never go on any type of boat again in my life after this.”