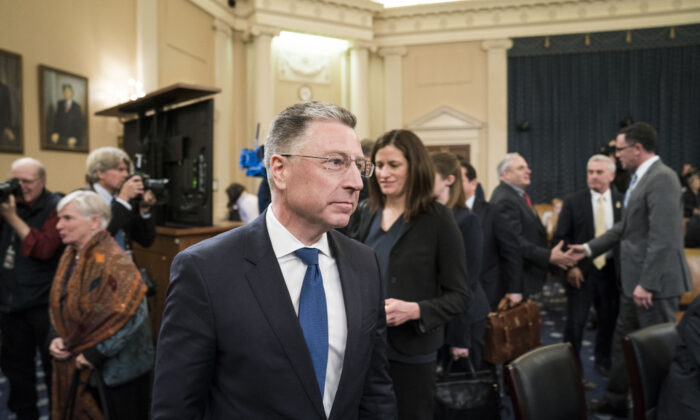 We learned nothing from the “terminable and interminable”—in Sigmund Freud’s words—questioning of former special envoy Kurt Volker, Lt. Col. Alexander Vindman, and former National Security Council official Tim Morrison at the Nov. 19 impeachment hearing that would even remotely justify a vote for impeachment (although it will almost certainly happen, only to die a predictable death in the Senate).

But what we did hear from Volker, a witness chosen by the Republicans (one of the few deemed acceptable by House Intelligence Committee Chairman Adam Schiff (D-Calif.)), was praise for former Vice President Joe Biden as a man of seemingly impeccable virtue who would never indulge in corruption, let alone anything untoward.

Perhaps the ambassador has forgiven or forgotten the former vice president’s multiple instances of alleged plagiarism, first in law school and later by ripping off a speech from a noted British politician, that caused him to withdraw from previous attempts at the presidency?

And perhaps Volker just thought Biden’s son Hunter receiving more than $80,000 a month from energy company Burisma was just business as usual—everybody’s doing it in Ukraine—and to be ignored? Hunter—who can’t speak Ukrainian and knew nothing about energy—couldn’t possibly have the job because of Joe Biden. No bribery there. No quid pro quo. That’s Trump behavior. Just ask Schiff and House Speaker Nancy Pelosi (D-Calif.).

And then there’s the little matter of China, from which Hunter profited at exponentially higher numbers via a hedge fund lavishly funded by the Chinese communists after he joined his father on a visit to Beijing. (Joe Biden, as many will recall, first ostentatiously pooh-poohed China as any kind of competitor to the United States. He had to take that back like lightning when the campaign got underway and he discovered people were watching and things were happening in Hong Kong. Oops.)

The good news in all this is that Volker’s blindness—if that’s what it was; maybe he was just fibbing—could well help keep the Biden campaign alive. Despite the threat of rising South Bend, Indiana, Mayor Pete Buttigieg and Sen. Elizabeth Warren (D-Mass.), Biden is still stumbling along. His big problem is that the donors aren’t showing or ponying up. Depending on whom you ask, his campaign only his two or three month’s worth of cash on which to survive.

The fat cats obviously smell blood, as they are wont to do. First, there’s the age thing (let’s be charitable here and leave it at that) and then there’s the corruption thing. The latter may explode beyond redemption with the release of the inspector general and John Durham investigations on the Russia hoax (aka “Spygate” hereabouts) that could well implicate Biden along with Hillary Clinton, a twofer for the Democratic old guard.

No wonder the donors are hanging back.

Will a few kind words from Volker change all that? Doubtful, but who knows? Nothing, as Lawrence of Arabia said, is written.