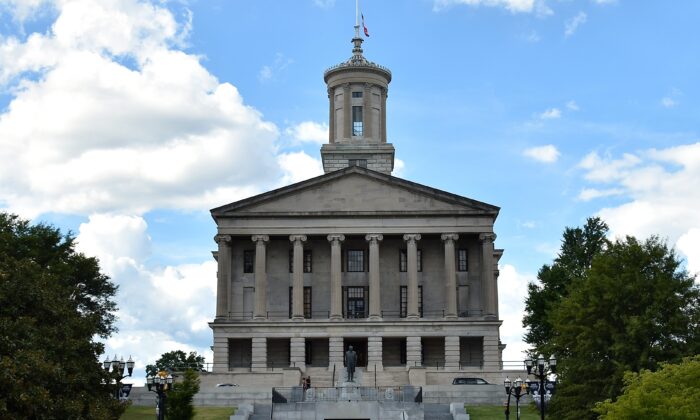 The Tennessee state capitol in Nashville, Tenn., on Aug. 31, 2018. (FaceMePLS via Wikimedia Commons/CC BY 2.0)
Viewpoints

One of the premises of the book I am writing—working title “The Southbound Train”—is that if America is to be saved, if we are to hand down to our children and grandchildren something akin to the constitutional republic envisioned by the Founders, it will be through the red states.

The blue states are already too far gone. One-party states dominated by their nearly unlivable Democratic cities, these states—notably New York, California, Illinois, and Massachusetts, but others too—appear beyond redemption, at least for the foreseeable future.

The problem is that red states also have their issues, sometimes sizable ones.

This is often a surprise to the many internal migrants that have been, for the past few years, leaving the woke dystopia of blue states for what they had assumed was the conservative nirvana of red states.

Because of this, many people—again to their surprise—who never considered such things before have become political activists or even run for office.

Williamson County, Tennessee, as with Virginia’s Loudon County before it, has become a center of such activism and, with effort, may propel change much in the way that Loudon County did: partly instigating the election of a new Virginia governor.

To understand what’s happening in Williamson, it’s necessary to understand something about Tennessee, which isn’t like purple Virginia. Tennessee, which voted nearly two-thirds for Donald Trump in both 2016 and 2020, would seem one of the most reliable red states. But as recently as 12 years ago, the state had a Democratic governor, Phil Bredesen, previously a longtime mayor of Nashville.

Nevertheless, the Tennessee General Assembly currently is predominantly, even excessively, Republican, with the State Senate numbering 27 Republicans to six Democrats.

And therein lies part of the problem. Tennessee, like California, has increasingly become a one-party state. You don’t need Lord Acton to tell you what that means.

Some very brave people worked very hard to turn Tennessee red, among them the late-lamented Sen. Fred Thompson, whom I counted as a friend long before I moved to the state. However, others—either sooner or later—took their majority status as an opportunity to feed at what we all know as the political corruption trough—doors open for lobbyists, but not so much for the people who elected them.

Some say the state’s new Southern Republican rulers are just the old Southern Democrats in changed clothes. That’s a bit excessive, but Tennessee, like a lot of places, has a unique history (cf. “The Secrets of the Hopewell Box”). For dubious reasons, key offices such as the state attorney general are appointed, not elected.

Quite recently several House GOP lawmakers, including Speaker Cameron Sexton, have been subpoenaed by the FBI in connection with the investigation of the former GOP Speaker Glenn Casada. Yes, the FBI has of late been biased against Republicans, but, still, this isn’t pretty.

So, on to Williamson County, where a war is indeed happening on several fronts. Williamson, as I have written earlier, is one of the wealthiest Republican counties in the country—home to Sen. Marsha Blackburn, Outkick’s Clay Travis, and numerous country stars—and supposedly famed for its superior educational system that has attracted migrants from many blue states, currently at an extraordinary rate.

Only it’s anything but superior, suffused by a curriculum euphemistically called “Wit & Wisdom,” which is designed not to truly educate children but to prepare them for citizenship in the Kingdom of Woke. Third graders learn far more about sexuality and supposedly pervasive racism than they do about math.

A group called Williamson Families, led by Robin Steenman, an Air Force veteran who made bombing runs over Afghanistan, has been formed to combat this assault on their children. They are running candidates for school board and county commissioners who were thoroughly vetted by a committee led by Olivia Shupe, interestingly a refugee herself from Redding, California.

These nominees, mostly political neophytes, have been attending classes on how to run against incumbents who are often supported by the local Chamber of Commerce.

Just as important is another relatively recent arrival, this one from Texas, Gary Humble, who started a group called Tennessee Stands that is growing rapidly.

The website declares the group’s intention: “We awaken and equip all citizens to boldly assert the unalienable rights given to them, not by man, but naturally by God. Therefore, ‘We the People,’ stand together not simply as an organization but as a force of nature.”

His opponent, 16-year incumbent Jack Johnson, isn’t only the local senator but also speaker of the Tennessee Senate and arguably the most powerful in-state politician other than Gov. Bill Lee.

Can Humble win? While the odds would normally be stacked vastly against him, the migration of potential new voters into Williamson County is a wild card.

A realtor I spoke with, who himself came from Los Angeles, kept his office there, and now is helping people both sell there and buy in Williamson, says the numbers are actually head-spinning. So who knows?

And Humble has pledged never to meet with lobbyists—perhaps a political first in any state.