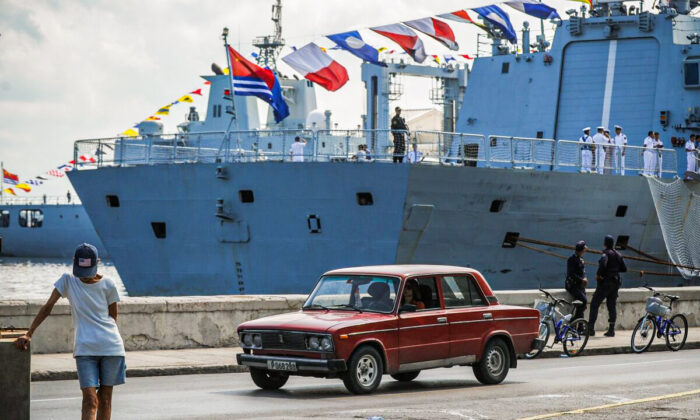 Will the Beijing–Havana Axis Spawn Another Cuban Crisis?

A growing China–Cuba axis threatens to transform the geopolitics of the Caribbean basin and heralds the return of great power rivalry to a region that has historically been a critical component of America’s continental defense.

How serious a challenge is Beijing’s Caribbean gambit to U.S. national security?

The significance of the China–Cuba axis was underscored nearly two weeks ago when Havana signed on to China’s Belt and Road Initiative (BRI). In doing so, it joined the Bahamas, Antigua and Barbuda, Barbados, Dominica, Grenada, Trinidad and Tobago, the Dominican Republic, and Jamaica as Caribbean participants in China’s infrastructure development program.

Cuba, the Bahamas, Antigua and Barbuda, Barbados, Trinidad and Tobago, and Jamaica have received commitments of more than $7 billion in Chinese aid and loans for various development projects, according to a 2020 report.

The BRI is a Chinese government-sponsored program, also known as “One Belt, One Road,” under which Chinese companies and financial institutions seek to build roads, acquire, expand, or create port facilities, develop railroads, as well as pipelines, power plants, 5G, and fiber optic networks.

The development projects are mostly funded with loans but may also include outright grants from Beijing. Critics of the program have pointed out that loan terms can be onerous and that several countries have already defaulted and have been forced to give Chinese companies control of the underlying assets.

In the Caribbean, projects have ranged from Grenada’s National Cricket Stadium to the Baha Mar resort in the Bahamas, to the Kingston Freeport Terminal in Jamaica, to the expansion and modernization of port facilities in Santiago de Cuba.

The addition of Cuba to China’s BRI underscores the rapidly growing economic relationship between the two countries. China has supplanted Russia as Cuba’s largest trading partner, and in turn, Cuba is China’s biggest trading partner in the Caribbean.

Senior Chinese government officials have visited Cuba more than two dozen times since 1995 and Cuban officials have reciprocated with a comparable number of visits. A People’s Liberation Army Navy (PLAN) hospital ship visited Cuba in 2011, and three PLAN warships visited for five days beginning Nov. 10, 2015, to commemorate the 55th anniversary of diplomatic relations between the two countries and to participate in a joint naval exercise with the Cuban navy.

China also is believed to have been involved in the construction and ongoing operation of a new radome designed to intercept U.S. communications at the Cuban signals intelligence facility in Bejucal, although Beijing’s involvement hasn’t been definitively proven. However, U.S. Sen. Marco Rubio (R-Fla.), a member of the Senate Committee on Foreign Relations as well as the Senate Select Committee on Intelligence, has claimed since 2016 that China was behind the new radome.

Chinese companies have played a major role in building out Cuba’s internet and telecommunications infrastructure, and played a key role in shutting down access to Cuban protesters when demonstrations erupted in July 2021.

Cuba is in a unique position to control the maritime approaches to key U.S. ports—in particular Miami, New Orleans, and Houston. The latter two are particularly important to the U.S. energy industry since more than half of all U.S. imports and exports of oil and gas flow through these two ports. In addition, roughly one-third of U.S. agricultural exports flow through New Orleans.

Geostrategically, the Caribbean plays the same role for the United States that the South and East China Seas play for China. A Cuban-based military capability would give China some of the same prerogatives to potentially threaten U.S. shipping that the United States has toward Chinese shipping in the China Seas.

China has claimed large areas of the South and East China Seas as territorial waters—a claim that is disputed by the United States as well as all of China’s maritime neighbors. Although the United States is the dominant military power in the Caribbean, it hasn’t extended any claims of sovereignty on any of the waters of the Caribbean beyond those already recognized by existing international treaties.

Both possibilities—especially if they were to include the stationing of ballistic missile submarines such as the Type 094 (Jin Class), in the Caribbean with access to Cuban naval facilities—would be red lines for the United States.

Will Beijing make the same mistakes that Moscow made when it tried to station nuclear-armed missiles in Cuba?

What is more likely is that China sees in the Caribbean the opportunity to gather geostrategic chips with which to bargain with the United States over its posture in the South and East China Seas. That makes it virtually inevitable that the PLAN’s naval presence in the Caribbean will increase in the future even if it stops short of a permanent deployment.

China’s position in the Caribbean has grown substantially over the past decade—and will continue to do so in the future. Moreover, China’s rapidly growing economic and diplomatic position in the region and its possible military dimension means that though they may be on opposite sides of the world, the South and East China Seas and the Caribbean are increasingly linked geostrategically.

All the more reason for the United States not to take its position in the Caribbean for granted. It’s time for Washington to renew its commitment to the countries in its own backyard!