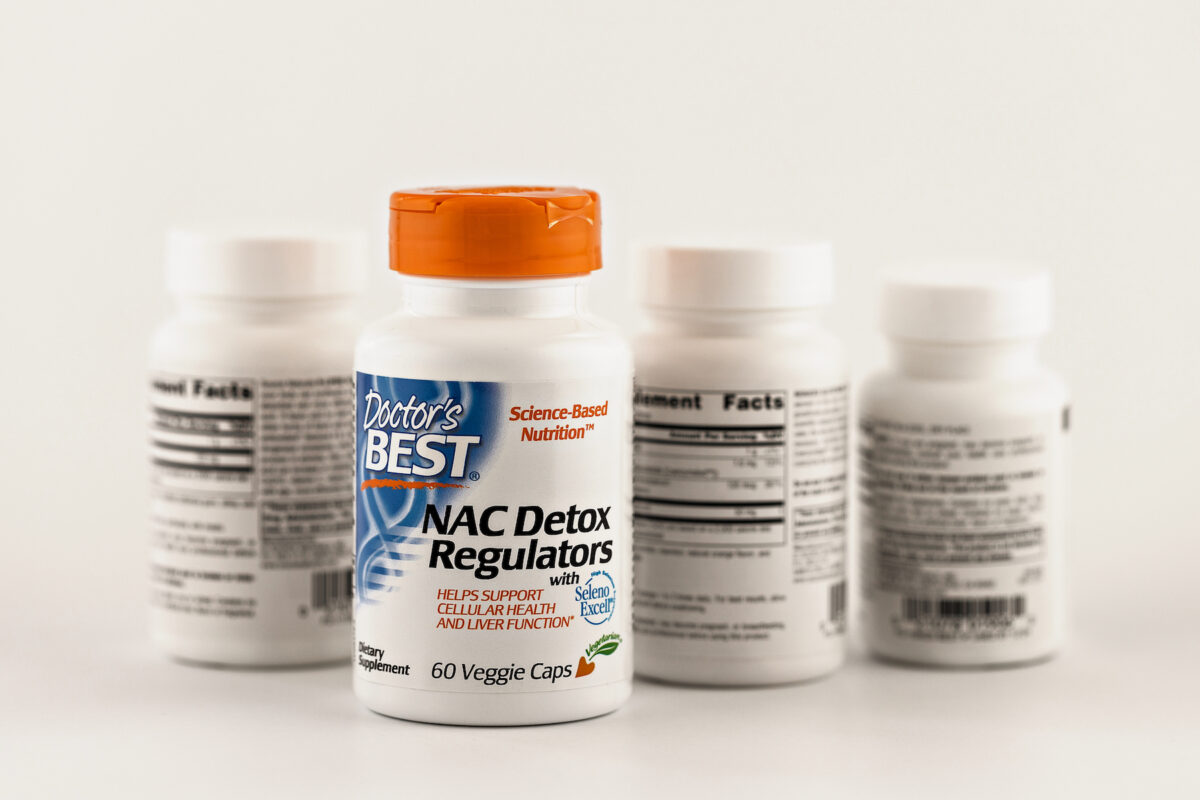 Will NAC Become a Banned Supplement?

Following the FDA’s 2020 attack on NAC, excluding it from the definition of dietary supplements, new draft guidance suggests the agency isn’t going to enforce the ban and may restore this beneficial compound to its prior supplement status.

N-acetylcysteine (NAC), a form of the amino acid cysteine and a common dietary supplement, has been on the market for nearly six decades. Among its many benefits is helping increase glutathione and reduce the acetaldehyde toxicity1 that causes many hangover symptoms, but anyone who overdoses on acetaminophen (Tylenol) also receives large doses of NAC in the emergency room, as it helps prevent liver damage by increasing glutathione.

However, the U.S. Food and Drug Administration suddenly cracked down on NAC in 2020, claiming it is excluded from the definition of a dietary supplement, as it was approved as a new drug in 1963,2 before it was marketed as a dietary supplement or as a food.

Retailers, including Amazon, pulled supplements containing NAC from their shelves in response, as the FDA’s move meant that NAC could no longer legally be marketed as a supplement, even though there are no fewer than 1,170 NAC-containing products in the National Institutes of Health’s Dietary Supplement Label Database.3

Draft guidance released by the FDA in April 2022 gives a glimmer of hope that NAC will continue to be available over-the-counter,4 but it’s still uncertain whether NAC will end up becoming a banned supplement.

According to the FDA, their draft guidance, once finalized, will:5

“… explain our intent to exercise enforcement discretion with respect to the sale and distribution of certain NAC-containing products that are labeled as dietary supplements.

This enforcement discretion policy would apply to products that would be lawfully marketed dietary supplements if NAC were not excluded from the definition of “dietary supplement” and are not otherwise in violation of the Federal Food, Drug, and Cosmetic Act.”

In July 2020, the FDA sent out warning letters to seven companies that marketed NAC as a remedy for hangovers.6 Nine months after the FDA issued warning letters with their position that NAC supplements could not legally be sold, Amazon began removing products containing the supplement.7

The new verbiage suggests, however, that the FDA will not be enforcing their policy that NAC cannot be marketed as a dietary supplement, even though it’s technically still illegal to do so. And therein lies the problem. Steve Mister, president and CEO of the Council for Responsible Nutrition (CRN), explained:8

“That still leaves some exposure for the industry for a state [attorney general] to say, ‘Well if it’s technically illegal under the federal law,’ we don’t care that FDA’s not enforcing it. We could do it. It also leaves you potentially exposed [to] a plaintiff’s attorney.”

Further, payment processing platforms, including PayPal, are among those that added policies prohibiting the sale of NAC products labeled as supplements following the FDA’s 2020 warning. It’s unknown whether PayPal will reverse its policy, or whether other major retailers, like Amazon, will begin to offer NAC supplements again.

Former FDA official Robert Durkin suggested that, in theory, the “draft guidance in and of itself should provide enough comfort to retailers to start marketing NAC-containing dietary supplements now.”9 Whether that will be the case in practice remains to be seen.

After the FDA decided that NAC could no longer be marketed as a dietary supplement, CRN and the Natural Products Association (NPA) filed separate citizen petitions with the FDA requesting that the agency reverse its position.

The CRN letter in December 2020 challenged the FDA’s determination that NAC should be precluded from supplementary use.10 They then filed a citizen position petition June 1, 2021, requesting the FDA reverse its position and outlining why this sudden policy change is “legally invalid on multiple grounds.”11

The NPA filed a separate citizen petition with the FDA12 requesting that the agency not exclude NAC as a dietary supplement or, alternatively, that the Department of Health and Human Services (HHS) issue a regulation finding NAC is lawful in supplements.

November 24, 2021, the FDA announced they were requesting more information about how NAC has been marketed as a dietary supplement,13 including information and data on the date that NAC was first marketed as a dietary supplement, reports of adverse events and details on how the products are marketed and sold.14 In their latest draft guidance, the FDA suggests it is still considering the petitioner’s requests:15

If, among other considerations, the FDA does not identify safety-related concerns as we continue our review of the available data and information, we are likely to propose a rule providing that NAC is not excluded from the definition of dietary supplement.”

FDA Acknowledges There Are No Safety Concerns

In a positive step, while the FDA stated that their full safety review of NAC is ongoing, its initial review “has not revealed safety concerns with respect to the use of this ingredient in or as a dietary supplement.” The agency further explained:16

“In addition, NAC-containing products represented as dietary supplements have been sold in the United States for over 30 years and consumers continue to seek access to such products. Accordingly, while the FDA continues its evaluation of the request to initiate rulemaking, the FDA issued this draft guidance to explain our policy regarding products labeled as dietary supplements that contain NAC.

Unless we identify safety-related concerns during our ongoing review, the FDA would intend to exercise enforcement discretion (as described in the draft guidance) until either of the following occurs: we complete notice-and-comment rulemaking to allow the use of NAC in or as a dietary supplement (if we move forward with such proceedings) or we deny the citizen petition’s request for rulemaking.

If the FDA determines that this enforcement discretion policy is no longer appropriate, we will notify stakeholders by withdrawing or revising the guidance.”

With the draft guidance suggesting that no safety concerns have been noted, and enforcement is unlikely, Marc Ullman, counsel to the law firm Rivkin Radler LLP, suggested it should be perceived as “a win for industry” and that Amazon should “rescind its ban” on NAC dietary supplements in response:17

“FDA has said there’s no safety issue and it’s not going to take enforcement action. I think it would be an incredible overabundance of caution for any retailer to say, ‘We shouldn’t get NAC back into commerce.'”

The FDA’s crackdown on NAC coincided with research suggesting COVID-19 treatment as a new indication. According to one literature analysis,18 glutathione deficiency may be associated with COVID-19 severity, leading the author to conclude that NAC may be useful both for its prevention and treatment.

Previous research has shown NAC inhibits the expression of proinflammatory cytokines in cells infected with highly pathogenic H5N1 influenza virus. Proinflammatory cytokines also play a crucial role in COVID-19 severity.19 Considering many COVID-19 cases also involve blood clots in addition to excessive oxidative stress, and NAC effectively addresses both, I believe NAC should be included in the standard of care for COVID-19. As noted in the FASEB Journal:20

“COVID-19 may cause pneumonia, acute respiratory distress syndrome, cardiovascular alterations, and multiple organ failure, which have been ascribed to a cytokine storm, a systemic inflammatory response, and an attack by the immune system. Moreover, an oxidative stress imbalance has been demonstrated to occur in COVID-19 patients.

N-Acetyl-L-cysteine (NAC) is a precursor of reduced glutathione (GSH). Due to its tolerability, this pleiotropic drug has been proposed not only as a mucolytic agent, but also as a preventive/therapeutic agent in a variety of disorders involving GSH depletion and oxidative stress …

Thiols block the angiotensin-converting enzyme 2 thereby hampering penetration of SARS-CoV-2 into cells. Based on a broad range of antioxidant and anti-inflammatory mechanisms … the oral administration of NAC is likely to attenuate the risk of developing COVID-19, as it was previously demonstrated for influenza and influenza-like illnesses.

Moreover, high-dose intravenous NAC may be expected to play an adjuvant role in the treatment of severe COVID-19 cases and in the control of its lethal complications … including pulmonary and cardiovascular adverse events.”

Another study published in 2021 compared consecutive patients hospitalized with moderate or severe COVID-19 pneumonia.21 One group received only standard care and the other group received 600 milligrams of NAC twice daily for 14 days. There were 42 in the NAC group and 40 in the control group. Treatment with NAC led to lower rates of severe respiratory failure and significantly lower mortality rates.

NAC Offers a Multitude of Benefits

NAC has been described as an “old drug with new tricks” because scientists are continually uncovering new ways to use it.22 Along with antioxidant, anti-inflammatory and mucolytic properties, NAC may be a useful adjuvant for a variety of chronic diseases and other medical conditions, including:23

Recently, it was found that NAC may also prevent strokes in people with hereditary cystatin C amyloid angiopathy (HCCAA), a rare genetic disorder.24 People with HCCAA have an average life expectancy of just 30 years, and most die within five years of their first stroke,25 so reducing their incidence could prove to be essential to increasing survival.

The finding is even more significant because it was conducted by researchers from Children’s Hospital of Philadelphia (CHOP), which is notoriously against supplements. NAC appears to work by preventing the formation of amyloid-producing proteins, which promote amyloid deposits linked to strokes.26

It could also have potential for Alzheimer’s as, according to the CHOP researchers, the process of protein deposition that occurs in HCCAA is similar to what occurs in Alzheimer’s, although at an accelerated pace, which is why dementia occurs later in life than Alzheimer’s.

With so many potential health benefits, the root of the motivation to ban NAC as a supplement likely lies in protecting the finances of pharmaceutical companies. Hopefully in this case, however, the FDA will determine that NAC should be allowed to exist under the dietary supplement definition, ensuring widespread access to this important compound will continue the way it did for decades.

Originally published May 23, 2022 on Mercola.com