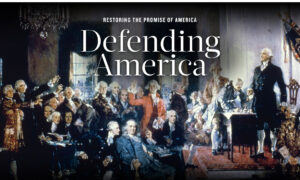 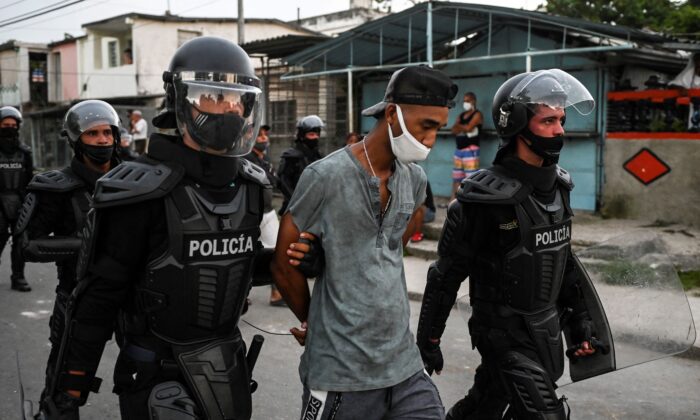 A man is arrested during a demonstration against the government of Cuban leader Miguel Diaz-Canel in Arroyo Naranjo Municipality in Havana, Cuba, on July 12, 2021. (Yamil Lage/AFP via Getty Images)
Viewpoints

Will Cuba Be Biden’s Iran?

Remember in November 2009, when thousands of freedom demonstrators in the streets of Tehran, Iran, were chanting “Obama, Obama, you are either with us or you are with them [the Islamic Regime]!”?

If not, click on the link and see for yourself. It was the moment then-President Barack Obama revealed himself as the hypocrite (with a totalitarian soul) that he was and is.

He, of course, did nothing for the suffering people of Iran then for fear of undermining his nuclear deal with the mullahs that they had no intention of actually adhering to in the first place, and didn’t.

I can’t help but believe Obama must have known that too (most of us did), but went ahead anyway. I leave his motives for you to decide.

Now, Joe Biden is confronted with an oddly similar situation. For the first time in decades, the Cuban people are rising up against their communist masters. Will our president stand up for democracy and freedom or will he crumble (or bow to other interests) like his “former” boss?

Ironically, one of the demonstrators’ chief complaints, other than, of course, desperate pleas for freedom from a wretched dictatorship of decades, is lack of medical care, including COVID vaccines.

Which brings forth another not-too-distant memory (2007)—the debut of that cinematic pack of lies ”Sicko,” in which Michael Moore goes to Havana to assert the superiority of the Cuban medical system to our own on the basis of absolutely ludicrous claims.

In 2016, when the corpulent Moore not surprisingly contracted a serious case of pneumonia and admitted “things didn’t look good,” he, again not surprisingly, didn’t return to Cuba for treatment but checked into an ICU at a New York hospital that got him better in a week.

That’s what Biden has weighing on him in formulating his Cuban policy, or lack thereof—the Michael Moores of the world like The Squad and Bernie Sanders, whose endless hypocrisy about totalitarianism is only topped by the list of the 15 “woke” Hollywood personalities who “hobnobbed, vacationed, promoted movies in communist Cuba” cited by Breitbart.com.

(I thought these “progressives” were so big on gay rights. Didn’t they see the movie—“Before Night Falls”—about Fidel imprisoning homosexuals? El Che wasn’t much for gays either, or for his old comrades, for that matter. When they didn’t adhere to what he thought was the party line, he would line them up against the wall and shoot them.)

I was, I am sad to admit, also an early sucker for the socialist romanticism of the Cuban Revolution. When I was 13, my friends and I raced down to Central Park to hear Fidel speak. It was quite a scene with seemingly every Dominican in the city present, screaming for Castro to do for their country what he had done for Cuba. That was the year he came to New York and roasted a chicken in his room in Harlem’s Hotel Theresa.

Later, I knew people who joined the “Venceremos Brigades” and went down to the island to cut sugar cane, but that was a little too “red,” not to mention arduous-sounding, for me.

I finally got to Cuba myself in 1979. By then, I was, to say the least, skeptical of the revolution but I couldn’t resist an invitation to be a delegate to the First Festival of the New Latin American Cinema.

I flew down illegally on a six-seater out of Miami that almost turned back when the pilot, a Vietnam vet, figured out where we were going. The only one on the plane who spoke any Spanish, I ended up talking the flight down to a suspicious traffic controller at the rural-looking Havana Airport with its sprinkling of military aircraft and one Aeroflot jetliner.

The island was even worse than I had expected, completely locked down at that point, with even the Afro-Cuban music I had grown up with in New York banned. (This was before the advent of the Buena Vista Social Club.)

We delegates spent our time watching a series of mostly boring propaganda movies while some of the local filmmakers whispered in our ears how they wanted to get out.

The highlight of the week was being taken to the Tropicana nightclub, that holdover from Batista times with young ladies in scanty outfits dancing in front of overweight Eastern European apparatchiks apparently having the time of their lives in the tropics. That, in itself, was a lesson in the true nature of communism (that and also that Fidel died a billionaire in such an impoverished country).

Like all communist countries, it felt like being in a big jail and I was happy when it was time to leave. But it wasn’t so easy. Somehow, our plane wasn’t being given permission to land. We waited for a full day at the Havana Airport, getting increasingly nervous—would we ever get home again—until finally, Raul Castro himself gave an order, the plane landed and we were gone.

I think about that moment when I see the intermittent reporting coming in from Cuba, the reluctance of the mainstream media to say much, lest they hurt the administration. As is so often the case in these situations, it doesn’t look good for the demonstrators.

Could we even give support if we wanted to? America, once a bastion of democracy, no longer is one. The State Department and the White House equivocate, making pronouncements that sound OK but are no more than that.

Are they going to give out money, as they so often do, to calm things down and return to the status quo, as horrid as it is? We are left to wonder, as the old song went, “Which Side Are You On?”

Correction by the author: I was reminded by a reader whose date of birth is one day before mine that Fidel Castro first came to New York in 1959, four months after assuming power. Checking, I found that was April 1959, so I would have been fifteen that night in Central Park, not thirteen as I wrote above. Further, I discovered Castro actually stayed at the Hotel Theresa, with a large Cuban entourage, one year later in !960 on his second trip to NYC. This is what happens when you rely on memory for events that occurred over sixty years ago. I apologize for the inaccuracies and will try to do better in the future.