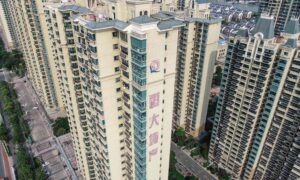 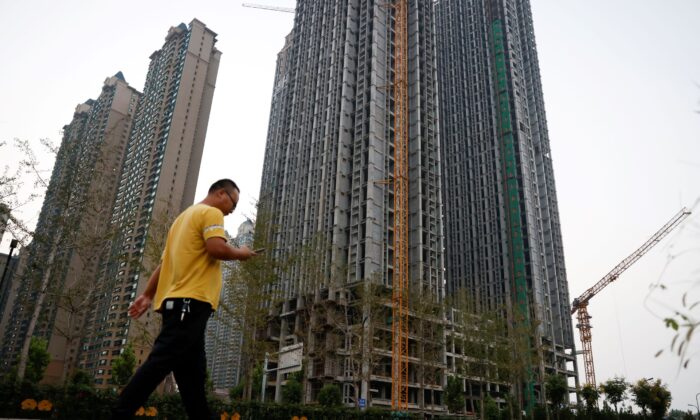 A man walks in front of unfinished residential buildings at the Evergrande Oasis, a housing complex developed by Evergrande Group, in Luoyang, China on Sept. 15, 2021. (Carlos Garcia Rawlins/Reuters)
Thinking About China

Is China’s real estate-based economy on the brink of collapse?

A big part of it just might be, if not all of it.

Evergrande, China’s second largest real estate developer and the world’s most indebted property developer, is in danger of defaulting on loan service payments. Much of the debt is held by Chinese banks, driving concerns of a collapse in China’s huge and heavily indebted financial sector.

But that’s not all. A significant amount of Evergrande’s debt ($800+ million) is held by foreign interests as well. Given China’s extensive economic ties with the rest of the world, the fear is that the collapse of such a large firm will have economic consequences for both China and its foreign bondholders.

Neither are unreasonable fears. Parallels have been drawn between the financial crisis in 2008, which was triggered by the collapse of Lehman Brothers, a notable Wall Street investing firm that was supposedly “too big to fail.” But when it did, other firms began to as well, requiring massive government bailouts in the trillions of dollars amid a deep recession.

That same fear of economic contagion may be part of what drove financial asset prices to tumble last week. Some financial experts think the fallout from the Evergrande default could be far worse than that of Lehman Brothers.

Observers have known that the Chinese real estate market has been in a bubble for decades. As for Evergrande, it’s the poster child for China’s long-overheated real estate-based economy. A year ago, the headlines were very similar to today’s when the real estate firm faced a $120 billion debt service crisis.

But somehow, the People’s Bank of China (PBOC) was able to work things out—at least for a while. But this time, the outcome may differ. In fact, Evergrande isn’t alone in its financial struggles; other heavily leveraged Chinese property developers such as Sinic Holdings and others are also in trouble. On Sept. 20, Sinic crashed 87 percent in Hong Kong.

Evergrande and other highly leveraged property firms’ problems stem from China’s overreliance on real estate assets to drive economic growth and employment. That’s due to the fact that the Chinese Communist Party’s (CCP) main claim to legitimacy is economic growth and high employment. The Party’s biggest fear is civil unrest, and property development is easy to create and deliver.

That’s why, over the past three decades, real estate development has been used to satisfy all three of these goals. The financial process can be boiled down to a simple equation. State-owned banks lend money to state-owned companies and/or local Party officials, who then build apartments, shopping centers and other urban structures, and then sell them to private Chinese investment groups, who then re-sell them to private individuals, investment pools, and other private investor entities. Often times, the builder sells them directly to the public.

The CCP has relied on real estate development—regardless of market demand—as a way to keep employment high. To keep demand and prices high, investment options for private citizens have been relatively limited compared to the United States or Europe. That’s one reason why long term Chinese household savings rates (over 40 percent) are much higher than in the United States (about 8 percent), but also why housing prices relative to household income are also much higher, 30 times or even more.

To protect the banks providing funding for the land and construction, the PBOC would just refinance existing loans and interest owed into new larger loans. Bonds would also be issued to fund new developments, fueling a domestic bond bubble of $52 trillion. Since the CCP controls the PBOC and the valuation of the yuan, market distortions and massive debt are allowed to occur and worsen year after year, decade after decade.

A Symptom, but Not the Disease

But like all structures, physical or financial, distortions become weaknesses, limits are reached and collapse follows. That’s what’s happening with Evergrande, and as noted above, it is not alone, nor is it atypical. Most, if not all, of China’s real estate development market looks like Evergrande. One of the results is the scores of vacant cities that have been built as “investments.”

The problem is that no one lives in the thousands of empty apartment buildings that have been built. No one shops at the empty malls or rides metros or occupies the office buildings of “ghost cities.” Consequently, there are no rents, no mortgages, no returns on the building of ghost cities that have been constructed solely to maintain the hollow claim of the CCP’s legitimacy.

The financial sector, of course, is directly tied to the development firms and is in no better shape. Decades of bad loans made and remade, adding up to tens of trillions of dollars of bad debt. The failure of one firm, of one bank, could lead to more, as we saw during the global financial crisis of 2008-09.

China’s Central Bank Takes Everybody Down?

One of the ways that the PBOC has tried to lessen or even avoid a default is to lower bank reserve requirements. This frees up money in the financial system, which can then flow to Evergrande so it can meet its debt obligations. But they’ve already done this several times before. It remains to be seen how effective it will be this time. It is particularly instructive to note that at the time of writing, China has paid domestic bondholders, but foreign bondholders have yet to be paid.

The rationale may be that the CCP wants to stabilize the internal situation to shore up its own credibility by “sticking it to the foreigners.” The last part may hit U.S. and European equity markets. It could also dampen the booming U.S. real estate market, since Chinese buyers are a significant factor in West Coast housing and other markets. Or worse, China’s popping real estate bubble could trigger a broader avalanche of fear in the global markets, leading to falling asset prices around the world.