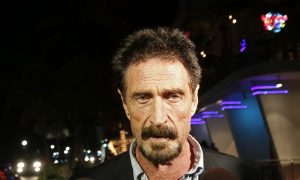 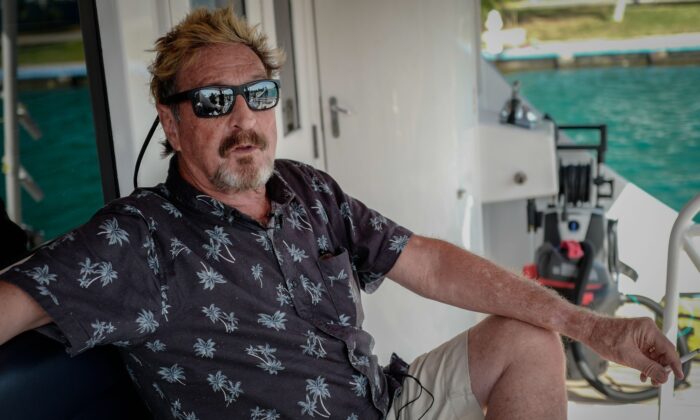 U.S. millionaire John McAfee gestures during an interview with AFP on his yacht anchored at the Marina Hemingway in Havana, on June 26, 2019. (Adalberto Roque/AFP via Getty Images)
US News

The widow of antivirus pioneer John McAfee said her husband, who died earlier this week in a Spanish jail, was not suicidal and said the U.S. federal government was responsible.

McAfee, 75, died on June 23 hours after a Spanish court ruled that he could be extradited to the United States on tax evasion charges. Officials in Spain said that his cause of death was likely suicide.

Janice McAfee, his wife, spoke to reporters outside the Spanish prison on Friday and called on prison officials to carry out an investigation.

“I blame the U.S. authorities for this tragedy. Because of these politically motivated charges against him. My husband is now dead,” she said in a statement, adding that he wasn’t suicidal.

“His last words to me were: I love you and I will call you in the evening” Janice McAfee said. “He would have never quit this way, he would never take his life in this way, ever.”

McAfee’s final statement to her “are not words of somebody who is suicidal,” his wife said.

The software pioneer-turned-cryptocurrency mogul was arrested last October at the Barcelona airport on a warrant issued by Tennessee prosecutors. They accused McAfee of evading more than $4 million in taxes.

“All John wanted to do was spend his remaining years fishing and drinking,” Janice McAfee added on Friday. “He had hope that things would work out. We knew that there would be an uphill battle to continue to fight this situation. But he’s a fighter … And anybody that knows John, that knows him even a little bit, knows that about him.”

“He was just so loving. He had a big heart and he just loved people and he just wanted to have peace in his life,” his widow also said. “My prayers are that his soul has found the peace in death that he could not find in life.”

Following his death Wednesday, some pointed to tweets McAfee previously wrote, including one in 2019 that included a cryptic warning.

The cybersecurity software pioneer in October 2020 also made a reference to Jeffrey Epstein, the disgraced financier who was found dead in a prison cell in August 2019 while facing sex trafficking charges.

“The US believes I have hidden crypto. I wish I did but it has dissolved through the many hands of Team McAfee (your belief is not required), and my remaining assets are all seized. My friends evaporated through fear of association. I have nothing. Yet, I regret nothing,” McAfee also wrote on June 16 of this year.