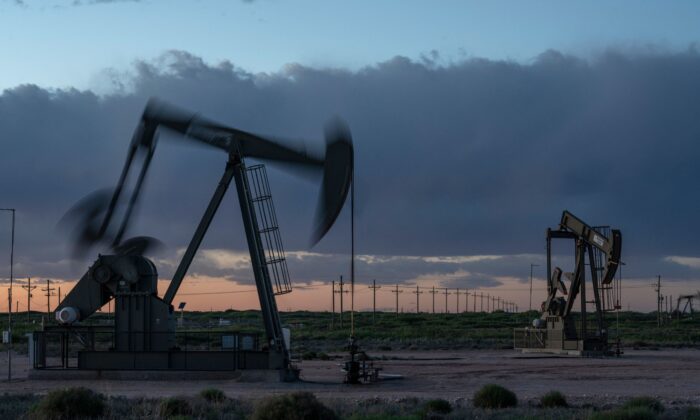 New Mexico business leaders, Republican figureheads, the oil industry, and workers in the state were quick to voice their opposition to the executive order, saying it would destroy the state’s economy. Some told The Epoch Times the move would force workers to relocate to states such as Texas, while others worried the freeze would become permanent.

Half of New Mexico’s oil and gas production is on federal land and amounts to hundreds of millions of dollars in royalties each year.

“It’s going to force us to buy more oil from nations that support terrorism,” Steve Pearce, chairman of the New Mexico Republican Party, told The Epoch Times. “And it’s going to hurt New Mexico’s economy, which has already been devastated by the governor’s response to COVID.”

Under Biden’s actions, roughly 50,000 jobs could be lost in the state, with potential losses of $3.5 billion, as most of the state’s core production comes from federal lands, said Pearce, who warned America would face “tremendous shortages.”

Oil and gas provide about 40 percent of the revenue for the state’s budget, Pearce said. A report released in September 2020 by the New Mexico Oil and Gas Association (NMOGA) said that the state’s oil and natural gas industry supported 134,000 in-state jobs and added $16.6 billion to New Mexico’s economy in 2018.

To highlight the immediate impact, the Republican chairman mentioned a text he received from a welder a few days ago. This welder, who was working on three or four rigs, had his contract canceled right after Biden signed his executive order and as the welder was heading to his workplace. The welder’s bosses told him they were moving their rigs to Texas, which has little federally owned land and has more private land than any other U.S. state.

The people in New Mexico are “very nervous” about what’s happening, not just for their own jobs but for the entire state, according to Mayor Dale Janway, who since 2010 has served as the mayor of Carlsbad, a city in southwestern New Mexico with a population of more than 49,000. He also criticized the Biden administration for promoting unity, while not actually speaking or listening to those affected by his executive order.

“How will New Mexico pay for its schools and roads? We keep hearing talk about wanting to work together, but we’d like to play a role in these discussions,” Janway told The Epoch Times.

“This should be a time for rebuilding,” he said. “Our greatest concern is that this 60-day freeze will become a long-term freeze. … And for what? Oil companies will just move resources to Texas and keep drilling.”

A large part of the state’s budget is also funded by drilling on federal land, said Janway, who described how the state is already facing numerous challenges, as are most places across the country. Jobs in New Mexico have already fallen due to the lockdowns and a number of workers became unemployed after a dip in oil prices earlier this year.

The Epoch Times reached out to the Biden administration for comment but didn’t receive an immediate response.

The United States became energy independent in 2019 for the first time since 1957, according to the Institute for Energy Research. Total U.S. energy production increased by 5.7 percent in 2019, the institute said, while U.S. energy demand fell by 0.9 percent.

Biden’s actions to freeze oil was laid out on his campaign website as part of one of his key promises of combating climate change. According to his website, under his Clean Energy plan, Biden said he would ban “new oil and gas permitting on public lands and waters” and also called for “modifying royalties to account for climate costs.”

“You can imagine with half of our production coming from federal lands that companies are just going to be moving out of the state,” said Pearce. “The oil in New Mexico has done a lot to make us energy self-sufficient.

“This was a very political decision to pay off supporters,” he added. “It’s one that reeks of bad judgment and bad economic policy. Forty cents out of every dollar comes from oil and gas.”

Industry groups said the order effectively brings all regulatory activity to a halt, from routine requests that arise during the normal course of business to requests for rights of way for new pipelines designed to gather more natural gas as part of efforts to reduce venting and flaring—practices that Democrats have targeted in their climate change agenda.

The issue has been divisive for Democrats in New Mexico, where the oil and gas industry has been vilified over pollution concerns, despite its role as the state’s top economic driver.

Carla J. Sonntag, president and founder of the New Mexico Business Coalition (NMBC), said the oil and gas industry represents about 100,000 direct and indirect jobs in the state and is also the primary funder of education in New Mexico. Sonntag said her team communicates with some of the oil and gas operators in the state, who she said are certainly unhappy about Biden’s move. She warned about the effects on more than just the oil industry.

“Even general businesses are very upset—they understand the impact on the state’s budget,” she told The Epoch Times.

“More importantly, if they are an industry that is related to oil and gas, if they’re a support industry providing services or supplies, they’re very concerned about how their business will continue,” she said.

The NBMC represents hundreds of New Mexico businesses and thousands of individuals who want to limit government dependence and expand the private sector. Sonntag noted that due to the large portion of land in New Mexico being federally owned, it’s reliant on federal leasing and opportunities to develop oil and gas. If they lose that ability in New Mexico, oil and gas companies will seek opportunities in other states.

If the support businesses aren’t able to operate in New Mexico, they will also look to leave the state, Sonntag said. She also said Biden’s freeze on oil won’t have the positive impact on the climate he says it will.

“We’re going to become more reliant on foreign energy, which puts us at risk,” she added. “But it’s also a bad move on the environmental progress that we’ve made because many of these foreign countries have lower environmental standards than the United States.”

“All around it is bad for the country—and it’s horrible for New Mexico,” she said.

But not everyone is against Biden’s moratorium and the administration’s broader stance on climate change. It has drawn praise from environmentalists, who have been seeking to rein in development across the Western world.

“Any step toward fixing the broken federal oil and gas leasing program is a step in the right direction,” Mark Allison, director of the environmental group New Mexico Wild, told The Associated Press.

Meanwhile, another move by the Biden administration is sparking a similar furor among critics, namely the president’s decision to cancel the permit for the Keystone XL pipeline.

Terry Cunha, a spokesperson for TC Energy Corp., told The Epoch Times via email that “as a result of the presidential permit being revoked for Keystone XL, 1,000 unionized jobs will be lost in the coming weeks.” The Epoch Times asked for more specific details about the job cuts but didn’t immediately receive a response.

Cunha, however, told Bloomberg that the 1,000 figure comprises workers “constructing on both sides of the border,” referring to Canada and the United States. It’s unclear how many of those jobs are American.