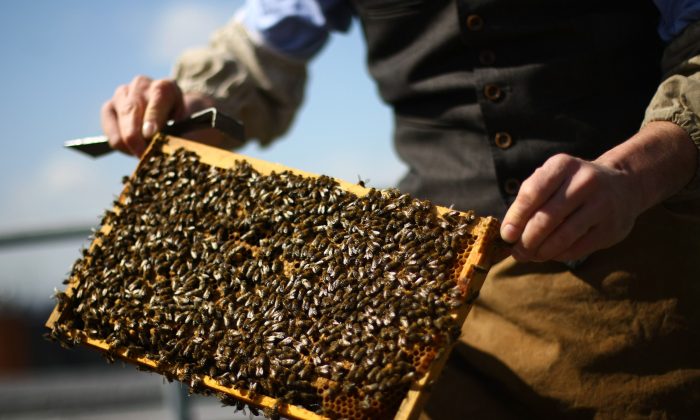 A panel of international scientists has found that the neonicotinoid class of pesticides is harming bees and the environment. (Jordan Mansfield/Getty Images)
Canada

An international panel of 50 independent scientists says they have conclusive evidence that a class of commonly used pesticides is harming a wide range of species, from insects to birds and even some aquatic species.

It is also likely that that neonicotinoids may be the cause of colony collapse disorder among bees, said Jean-Marc Bonmatin of France’s National Centre for Scientific Research and co-author of the scientists’ report.

“We found bees are especially impacted by these systematic pesticides and there is a clear link from the colony collapse observed worldwide, meaning 30 percent of all bees are dying every year,” Bonmatin said at a press conference in Ottawa on Wednesday, June 25.

“Other species are impacted, like earthworms in the soil, like aquatic species, and birds for instance,” added Bonmartin.

“The [crop] yields are not increasing with this pesticide—on the contrary; they are decreasing because of the lack of pollinators.”

The scientists said that neonicotinoid usage cannot continue at the current levels, and recommended a reduction of the pesticide use at the very least.

“Some decisions have to be taken and we advise to reduce, of course, and to only use this pesticide as needed,” Bonmartin said.

There have been substantial reductions in bee populations in Ontario and Quebec, which is thought to be linked to the use of the pesticides on treated corn seeds.

In Ontario, beekeepers estimated a 30 percent reduction in their hives last year. However, the same hive reductions have not been observed by beekeepers on the Prairies, where canola and soya is common.

“Most of the bee die-offs that are presently observed by Quebec and Ontario beekeepers—the acute impact is because the dosage is higher and this is related to the dust while sowing. This problem doesn’t appear for canola and soya,” said Madeleine Chagnon, a co-author and professor of biology at the Université du Québec à Montréal.

“There is chronic effect because of exposure, but this is not as visible.”

Last September, the Pest Management Agency updated guidelines related to the use of the pesticide, but unlike in Europe the agency has not implemented a ban and has instead elected to continue to study the issue.

However, the scientists say their findings are sufficient to trigger immediate action.

Bonmatin and Chagnon noted that some country’s bans have resulted in an increase in the number of pollinators, including bees. But they caution that the results take time and can vary greatly depending on the location.

In response to a question concerning the timeline before the pesticides dissipated in the soil, Bonmatin responded, “Accumulation is long in the soil. You will have to wait for three or four years before not detecting the product in the soil or water or the environment. It is a question of use.”

The scientists’ report was published in the academic journal Environmental Science and Pollution Research.