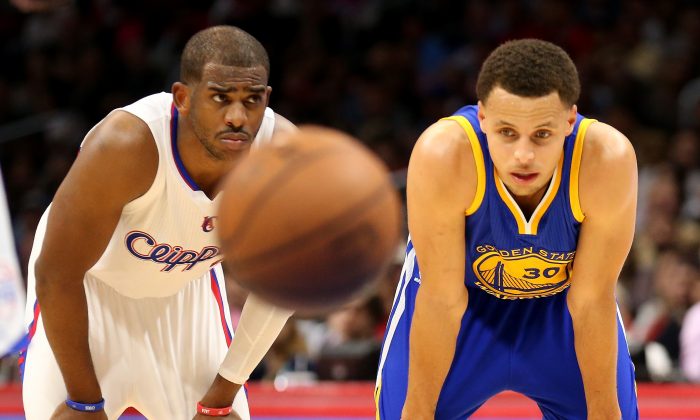 Chris Paul (L) and Stephen Curry are two of the best point guards in the NBA. (Stephen Dunn/Getty Images)
NBA

The reigning champion Warriors out-dueled their rival Clippers 112–108 November 4 in what could be a playoff preview between these two rivals.

At least we hope it is.

The NBA has had some great rivalries over the years and this one has all the makings of another one. Let’s go down the rivalry check points:

Oakland and Los Angeles may not be as close as Brooklyn and Manhattan, but they’re at least in the same state, so that should count for something.

This isn’t to say you can’t have a cross-country rivalry (Lakers/Celtics anyone?) but it helps that they battle over some of the same fans. This way even when both teams are on the decline, the fan interest is still there.

Here’s where this rivalry has recently out-distanced itself from a number of other rivalries: The Clippers and Warriors have had some incidents over the years that would lead us to believe that there’s some bad blood between the two teams.

From Chris Paul taking exception to the Warriors celebrating wins in LA, to Blake Griffin being mocked by the Warriors bench after badly missing a 3, to former Golden State coach Mark Jackson staring down DeAndre Jordan after Jordan threw down a pair of alley-oops when his team was up by more than 30 points, to numerous technical fouls and on-court skirmishes at a time when politeness and friendship between players and teams has taken over the NBA, this rivalry is full of bad blood.

An essential part of any rivalry wanting to take the next step is a playoff meeting—especially one that goes the distance.

Amazingly, these two have only met once in the playoffs over the last few years and it was a first-round matchup in 2014 that pitted them against each other. The Donald Sterling scandal that rocked the NBA happened right in the middle of the series that the Clippers won in seven.

Among the highlights was Blake Griffin “accidentally” dousing a Warriors fan with water near the end of Game 1; Glen Davis getting into it with both Marreese Speights and Jermaine O’Neal on separate plays in separate games; Chris Paul maybe getting away with a shooting foul on Stephen Curry that would decide Game 3 (Curry missed badly); and then a shouting match in the hallway between their locker rooms immediately after the Clippers won Game 7. It was a memorable series.

This is maybe the most important ingredient of a great rivalry—that they both have championship-caliber teams.

No one cares if the Nets and Knicks don’t like each other as long as they languish in the bottom half of the East.

But if the rival teams are both jockeying for playoff position—or are in a playoff battle themselves—it raises the stakes. Remember the Lakers–Kings rivalry from 2000 to 2002? They met in the postseason every year and every year the Lakers won—but by their third time around the Kings had home-court advantage and nearly took out the world champs in a hotly contested series that’s still talked about 13 years later.

Maybe we’ll be treated to the same come springtime.