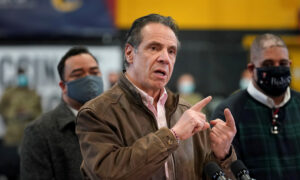 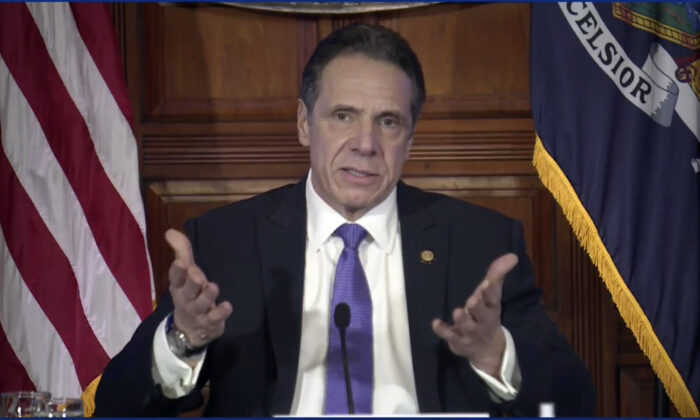 New York Gov. Andrew Cuomo speaks during a news conference in Albany, N.Y., on March 3, 2021. (Office of the NY Governor via AP)
Viewpoints

Why the Democrats Are No Longer Protecting Andrew Cuomo

Now that five women have stepped forward to accuse New York Gov. Andrew Cuomo of sexual harassment, the man once thought to be presidential material is fighting for his political life.

How did the 63-year-old politician’s star fade so fast? His briefings on his state’s handling of the coronavirus earned him an Emmy Award, and his book, “American Leadership,” about his epic management of the COVID crisis, hit The New York Times bestsellers’ list. It was just a few months ago that luxury retailers were advertising women’s underwear stamped with the name “Cuomo.” Liberal women swooned to hear the governor’s gravelly, cocksure voice, and his CNN appearances with his playfully obsequious younger brother Chris endeared them to left-wing audiences of all ages. And now the governor’s fans want his blood.

That’s because the media is doing its job, say media experts. The objective and bipartisan press, they say, is holding the rich and powerful accountable without fear or favor, just as they do with Republicans. Nonsense—that’s not why the left has Cuomo in its crosshairs.

“Cuomo’s deadly policies on nursing homes have been well-known among conservatives for a long time,” said Rep. Devin Nunes (R-Calif.). “However, before the election, the legacy media ignored that story, instead perversely hailing Cuomo’s exemplary leadership in fighting COVID and praising his self-congratulatory book. It’s unclear why Cuomo’s team even bothered with a cover-up, since the media was already doing it for them.”

Despite the avoidable COVID deaths in his state, the media extolled Cuomo because he played a central part in the signal project that consumed the efforts of the Democratic Party and its press partners from November 2016 to November 2020—pushing Donald Trump out of the White House. The ugly truth is that the high COVID death count in Cuomo’s state was useful to the Democrats because they exploited it to make Trump look bad.

But turning on Cuomo hardly means that Joe Biden’s party or its media mouthpieces have found their moral center. Rather, it just means Cuomo is no longer of use to the party. In fact, it’s because he represents a threat to other ambitious Democrats that the party has lifted its protective screen and green-lighted the media’s campaign. It’s open season on Andrew Cuomo.

“What’s changed is that Kamala Harris is now vice president, the de facto president, and the chosen standard-bearer for the Democratic Party,” said Nunes. “So the party’s power brokers are zeroing in on Cuomo as well as California Governor Gavin Newsom, who are her most likely rivals. Meanwhile, the legacy media is helping the party go after her competitors, while Big Tech is obediently lifting the filter from Cuomo and allowing the attacks to score.”

With the relentless and continuing attacks on Nunes after he uncovered evidence in 2017 that the Obama administration had spied on the Trump campaign, the nine-term congressman has become an expert on how the media and its Democratic Party masters partner to deceive the public and advance their destructive causes. In his recently published book, “Countdown to Socialism,” Nunes discusses the effects of the online media “filter” and other aspects of what he calls the “Disinformation Funnel.”

“The purpose of the Funnel,” he writes, “is to filter, refine, direct, and amplify propaganda ultimately disseminated through laptops, tablets, and smartphones. From there, it goes directly into your brain.”

Sometimes the purpose is to push propaganda in, and other times it’s to keep real information out. Some joint media-Democratic Party operations, like the “very fine people” hoax, accomplish both. Deceptive editing of Trump’s remarks regarding the 2017 riots in Charlottesville, Virginia, was used to feed the claim he had praised right-wing extremists as “very fine people.” In fact, Trump said that the neo-Nazis and white supremacists participating in the riots should be “condemned totally.”

Biden has said that he decided to enter the 2020 race because he was so outraged by these remarks from Trump. If that’s true, it means Biden was inspired by a lie, which the media still repeats. The “Disinformation Funnel” is so effective that one of the lawyers who represented Trump during the second impeachment didn’t realize that the “very fine people” episode was fraudulent until he began preparing his defense of the former president.

The Funnel is regularly employed to protect Democratic Party favorites. Evidence of Hunter Biden’s ties to allegedly corrupt foreign officials—in, among other countries, Ukraine, Russia, and China—were ignored prior to the 2020 election, even by prestige media organizations such as The New York Times, which had previously reported allegations of his involvement. Of course, those stories were filed before his father became the party’s presidential candidate.

But with a chance to get rid of Trump, social media sites such as Twitter and Facebook blocked reports of Hunter Biden’s alleged corruption, claiming, without irony, the reports were part of a foreign propaganda effort.

Cuomo, once thought of as potential commander-in-chief material, is now more likely to spend his days fending off federal prosecutors and sexual harassment suits. The lesson, which is sure to be lost on other Democratic officials who constitute what is effectively a U.S. politburo, is—live by the Funnel and die by the Funnel, too.