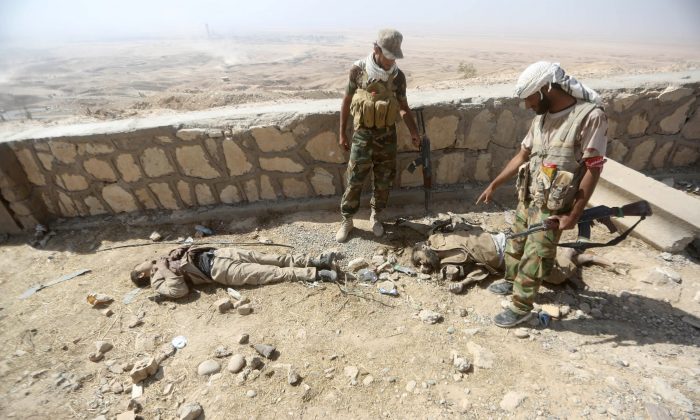 Iraqi Shiite fighters from the Popular Mobilization units, fighting alongside Iraqi forces, look at bodies of Islamic State (ISIS) fighters during a military operation against ISIS jihadists in the Makhoul mountains, north of Baiji, on Oct. 17, 2015. After recapturing parts of Baiji and the huge nearby refinery complex from ISIS, security and allied paramilitary forces thrust further northward up the main highway leading to Mosul. (Ahmad al-Rubaye/AFP/Getty Images)
Opinion

Why ISIS Is Killing Journalists

In October, two press freedom groups—Reporters Without Borders and the Journalistic Freedoms Observatory—issued a press release detailing the plight of independent media in the northern Iraqi city of Mosul, which fell to the Islamic State of Iraq and Syria (ISIS) in June 2014.

Unsurprisingly, the news is not good. Since June 2014, 48 members of the media in Mosul have been killed or abducted. Sixty have fled.

ISIS’s campaign against the media is just another entry in its long list of crimes, but is worth considering for several reasons. First, it is a reminder, if any is still needed, of just how depraved this group is. Intimidating, abducting, and murdering people because of their profession is typical of ISIS’s brutality. Second, understanding why ISIS cannot tolerate the free flow of information offers insights into the nature of the group and, importantly, its vulnerabilities.

Like all Islamic terrorist organizations, ISIS is profoundly authoritarian. No matter is too petty for it to regulate. A video secretly shot in Raqqa, Syria, shows ISIS fighters lecturing a woman for allowing part of her face to show through the veil covering it. The group also has standards for such things as the length of men’s pants and the position of hands during prayer, and has banned everything from Nike gear to pigeon-breeding. Controlling information is a natural part of ISIS’ totalitarian nature.

It is also critical to the group’s survival, however. One of ISIS’ greatest attractions for its adherents is its claim to have revived the long-dormant caliphate, or Muslim state, in accordance with a prophecy attributed to Prophet Muhammad. ISIS believes its revived caliphate is key in a series of events that ends in an apocalypse.

It is a powerful claim as the caliphate is supposed to restore Muslim preeminence and dignity. Many Muslim countries perform poorly in various human development categories, which makes the caliphate’s appeal all the more enticing. ISIS also invokes several sayings attributed to Muhammad to claim all true Muslims are duty-bound to migrate to the caliphate. If a Muslim is unable to make the journey, he must support it in any other way possible.

Much of what ISIS does, and the propaganda it peddles, is designed to prove it is the caliphate prophesied by Muhammad. It tries to behave as a functioning state, building a large bureaucracy that oversees a range of public works such as road maintenance, postal services, and even landscaping. In the first edition of its online magazine Dabiq, ISIS appealed for experts including engineers, doctors, and those with administrative and service skills to help build its state.

Unsanctioned news reports leaking out of its territory, however, have the potential to reveal damaging, un-caliphate like behavior. Such reports strike at ISIS’ justifications for its actions and very existence, and the group cannot allow them.

Independent journalism also complicates ISIS’s efforts to lure in recruits. In May this year, it released a guidebook, a sort of ISIS Lonely Planet, that extols the Islamic State’s “fruity cocktails,” cappuccinos, and “exquisite Mediterranean climate,” along with other wonders. It also lauds the diversity and unity of caliphaters. Other ISIS propagandists speak of the war booty fighters can win, or the house that ISIS will supposedly provide for each of its fighters.

Journalists expose these sorts of pretensions. Groups like the activist collective Raqqa Is Being Slaughtered Silently, who are some of the great heroes of the anti-ISIS struggle, distribute, at immense personal risk, pictures and videos documenting the bleakness of life fettered by the caliphate.

Finally, journalists disrupt ISIS’s messaging around its brutality. The cruelty ISIS broadcasts is choreographed and strategic and designed to intimidate its adversaries; provoke the world into an intervention ISIS believes will lead to the apocalypse; titillate aspiring jihadis with its version of “jihadi cruel;” and buttress its claim to be the only practitioner of pure Islam.

Journalists, however, expose the banality and routineness of ISIS’s brutality and authoritarianism, exposing ISIS terrorists not as virtuous warriors restoring Muslim dignity in the service of Allah, but as cruel, ordinary tyrants.

ISIS is hunting down journalists like those who are a part of groups like Raqqa Is Being Slaughtered Silently, even outside areas of its control.

The brave men and women exposing the group’s deceits and crimes need all the help the world can provide, for their work is a powerful weapon ISIS fears.

Joshua Meservey is a policy analyst for Africa and the Middle East within the Douglas and Sarah Allison Center for Foreign and National Security Policy at The Heritage Foundation. Copyright The Daily Signal. This article was previously published on DailySignal.com