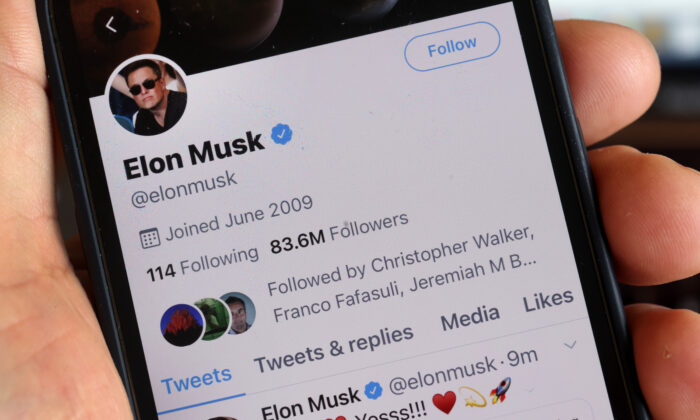 The Twitter profile of Elon Musk with more than 80 million followers in shown on a cell phone in Chicago on April 25, 2022. (Illustration by Scott Olson/Getty Images)
Stocks

Why Is Twitter Stock So Far From Elon Musk’s Takeover Price?

We all know Elon Musk’s offer to purchase Twitter Inc. for all cash has been accepted by the board.

Before it was made public that Musk had an interest in the company, the stock was languishing at the $40 area. When Musk originally purchased shares of Twitter and investors speculated that he may attempt to buy it, they aggressively bought the stock.

Interestingly, the initial two-day surge took the issue no higher than $54.57. After several days of uncertainty regarding Musk’s true intentions, the issue backed off from the $50 area. Over the next 10 sessions, Twitter shares bounced between $44 and $50. On Monday, when the board accepted his $54.20 offer, the issue peaked at $52.29. It has traded under $48 in each of the last two sessions.

Twitter’s Not the Only Cash Deal Trading at a Discount

Risk is a four-letter word, and the investors who employ the risk-arbitrage strategy stay in business by not taking too much risk on any one deal.

It has been an interesting year in this arena. On Jan. 16, Microsoft Corp made an all-cash offer for Activision Blizzard for $95 a share. There was skepticism right from the start about whether the deal would pass regulatory scrutiny, as the highest Activision traded during regular hours was $86.90.

Despite many Wall Street analysts strongly believing the deal will go through, the risk arbs aren’t so sure. As a result, Activision has fallen another $10 from the intraday high on Jan. 16 and is now $19 from the supposed deal price, potentially leaving a lot of “free” money on the table if the deal is consummated.

Tesla Stock in the Crosshairs

One unusual aspect of this deal is that Musk is pledging some of his shares in Tesla as collateral for the deal.

“The deal is completely funded by one person and what it looks like is margin loans,” said Tech Stock Strategies’ Sean Udall told PreMarket Prep on Thursday. Being on margin when an instrument is going up is fine and dandy, but when an instrument collapses, it could get ugly in a hurry.

With Musk’s stock out as collateral to 12 different banks, there seems to be a clear repricing of the shares since the deal was announced. At the conclusion of Monday’s session, Tesla closed at $998.02 and it traded as low as $821.70 earlier in Thursday’s session.

Will Musk’s appetite to do the deal be as robust, let’s say, if shares of Tesla fall to their February low ($700)? While that’s still far away from the level at which he would have to meet a margin call ($570), that much of a decline would put a major dent in the remainder of his stake.

For all intents and purposes, the aforementioned scenario will not be the straw that breaks the camel’s back for this deal. At least, not in today’s market environment.

Since the board approved the deal, it has to be ratified by Twitter shareholders, with a few of them having mega voting rights.

Let’s face it, with the head start Twitter had on other social media platforms and its gigantic reach, there’s no reason this should not be a $100-billion, $200-billion or even $300-billion company. Perhaps shareholders will realize that and will not be satisfied with the paltry offer of $54.20 from Musk.

Of course, if the deal is voted down by the shareholders, they must be willing to stomach a move back down to $40 or under.

More importantly, they will find a new management team. The change at the top from Jack Dorsey to Parag Agrawal was only a continuation of the lack of innovation that has plagued the company since its 2013 IPO. Going outside the box and bringing in some fresh blood may be all that’s needed so shareholders—and the public—can benefit from the company instead of Musk.