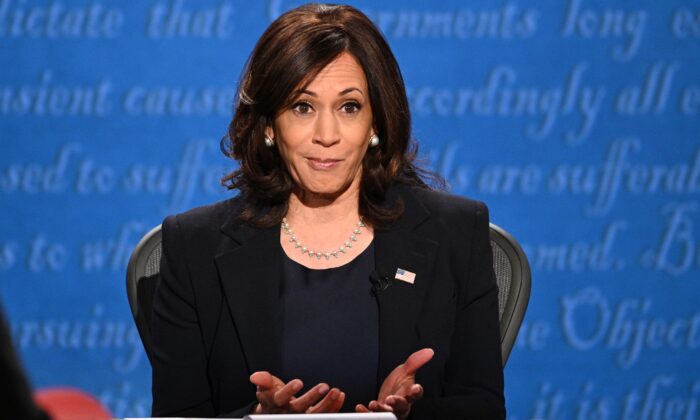 Why Is No One (Except the President) Calling Out Kamala Harris’s Communist Ties?

But there’s much more compelling evidence to indicate that, yes, Kamala Harris may indeed be communist.

Harris’s parents, her mother Shyamala Gopalan, an Indian cancer researcher, and Donald Harris, a Jamaican economist, were both hard-core leftists.

In the early 1960s, the couple were active in the Berkeley-based Afro-American Association.

According to one former member, Aubrey LaBrie, “Fidel Castro and Che Guevara were the heroes of some of us. … We would talk about Black Muslims, the liberation movements going on in Africa, everything.”

The group’s leader Donald Warden mentored two young Afro-American Association members Huey Newton and Bobby Seale, who would go on to found the Black Panther Party in 1966. The Panthers followed a Maoist philosophy and supported communist China. They serve as a model for today’s Black Lives Matter movement.

Years later, Warden (by then known as Khalid al-Mansour) would play a role in helping Barack Obama get into Harvard Law School.

In 1975, Donald Harris was recruited to the Stanford University economics department as an open Marxist.

After playing at student radical at Howard University, Kamala Harris returned to the Bay Area to launch her legal career. Thirty-year-old Harris formed an eyebrow-raising romantic relationship with then 60-year-old Willie Brown, a leading California Democrat, soon to become mayor of San Francisco.

Brown helped Harris’s career and steered her into a couple of board positions that paid her about $400,000 over 5 years, according to the San Francisco Weekly.

Brown was a long-time communist sympathizer. He was first elected to public office with the help of the Communist Party USA youth wing. He was funded by Dr. Carlton Goodlett, a communist newspaper owner, once awarded the Lenin Prize by the government of the former Soviet Union.

Several years after his affair with Harris, Brown was still openly sponsoring Communist Party fundraisers in the Bay Area while serving as San Francisco mayor.

Today, Brown is widely regarded as one of the Chinese Communist Party’s best friends in the Bay Area.

While serving as San Francisco district attorney, Harris mentored a young San Francisco activist named Lateefah Simon. After hiring her and helping Simon get through college, Harris introduced her young friend to many influential San Franciscans. Today, Simon serves as president of the leftist Akonadi Foundation and chairs the Bay Area Rapid Transit (BART) board.

When Harris first met Simon, the younger woman was serving on the board of directors of the Oakland-based Youth Empowerment Center. Every single other board member—Harmony Goldberg, Adam Gold, Cindy Wiesner, and future Obama Green Jobs Czar Van Jones—were members of the Maoist communist group Standing Together to Organize a Revolutionary Movement (STORM).

Harris openly supports Black Lives Matter and is still close with Simon and Garza. In turn, Garza is a long-time friend and associate of LeftRoots comrade Alex Tom—a man with close ties to the radical Chinese Progressive Association and to the Chinese Consulate in San Francisco.

Harris’s sister Maya Harris was a student activist at Stanford University. She was a friend of Steve Phillips, one of the leading Marxist-Leninists on campus and a long-time affiliate of a pro-China group League of Revolutionary Struggle.

According to Phillips’ blog “Political Intelligence”:

“First, let me make clear that I come out of the Left. I’ve studied Marx, Mao, and Lenin. In college, I organized solidarity efforts for freedom struggles in South Africa and Nicaragua, and I palled around with folks who considered themselves communists and revolutionaries …, and I did my research paper on the Black Panther Party.”

After leaving Stanford in the early 1990s, Phillips led many of his comrades into the Democratic Party. He also married into the multi-billion Sandler family Golden West savings and loan fortune, which enabled the young revolutionary to buy himself considerable political influence.

Sandler money has funded the Center for American Progress, ProPublica, and multiple candidates and ballot initiatives around the country. In 2008, Phillips spent $10 million through his PowerPAC-plus on voter registration drives in Southern and South Western states that got his friend Barack Obama ahead of Hillary Clinton in the Democratic primary.

In 2013, Phillips helped elect his old Stanford friend Cory Booker to the U.S. Senate from New Jersey. In 2018, he almost made his protégés Stacey Abrams and Andrew Gillum the governors of Georgia and Florida, respectively.

Phillips is a friend of the Harris family and helped Maya Harris’s husband Tony West become associate attorney general in the Obama administration. He has also been a major sponsor of Kamala Harris’s political career.

Phillips’ PowerPAC-plus helped elect Harris as California attorney general in 2010 and then to the U.S. Senate in 2016.

In the early 2000s, Harris’s current chief of staff Karine Jean-Pierre was active with the New York-based Haiti Support Network. The organization worked closely with the pro-China/North Korea Workers World Party and supported Jean-Bertrand Aristide, the far-left former president of Haiti and his radical Lavalas moment.

In April 2004, at the Whitman Theatre at Brooklyn College, 2,000 gathered to hear a program entitled “An Evening with Friends of Haiti: The Truth Behind the Haiti Coup.”

The rally was co-chaired by Jean-Pierre and Kim Ives of the Haiti Support Network, along with Pat Chin and Sara Flounders from the Workers World Party.

In May 2004, Jean-Pierre joined a delegation to Haiti with two well-known Workers World Party comrades Steve Gillis and LeiLani Dowell.

Around the same time, Jean-Pierre worked for China-friendly New York City Council member James Sanders. Her duties as part of his reelection campaign included working with the local branch of the much discredited “community organizing” group ACORN.

Harris’s husband Doug Emhoff works for the law firm DLA Piper, which “boasts nearly 30 years of experience in China and over 140 lawyers dedicated to its ‘China Investment Services’ branch,” according to the National Pulse.

“Ernest Yang, who serves as the firm’s Head of Litigation & Regulatory department and Co-Head of International Arbitration, was appointed to the Chinese People’s Political Consultative Conference (CPPCC) in 2013. The CPPCC serves as the top advisory board for the Chinese Communist Party, and Yang was promoted to the body’s Standing Committee in 2019.

“Jessica Zhao, a Senior Advisor, served as the Deputy Secretary General of the China International Economic and Trade Arbitration Commission (CIETAC), a government-owned body established by the Chinese Communist Party in 1956. It was developed under the auspices of the China Council for the Promotion of International Trade, ‘a governmental body for the furtherance of Chinese trade promotion.’”

Several other high-level DLA Piper employees, both Chinese and American nationals, have served the Chinese regime in some capacity or another.

Emhoff took a leave of absence from the firm in August, The American Lawyer reported.

If Biden is elected president, Harris will be one heartbeat or a few brain cells away from the top job.

If Harris was to apply for a mid-level job in the Department of Agriculture, she would almost certainly fail the security background check. She owes her entire career to sympathizers or active enablers of the Chinese Communist Party.

Fortunately for her (and potentially disastrous for the country), elected office holders are not subject to the security clearance process.

President Trump has said that “If Joe Biden ever got elected, China will own America.”

Biden picked the ideal running mate to help out.