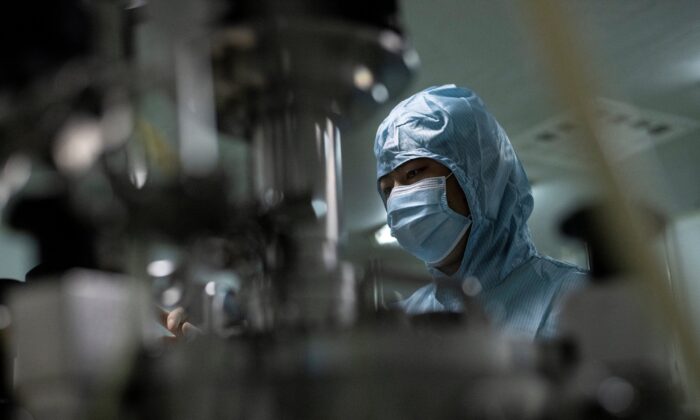 A researcher works in a Chinese biopharma lab in Shenyang, in China's northeast Liaoning Province, on June 10, 2020. (Noel Celis/AFP via Getty Images)
Thinking About China

Why Is a CCP-Backed Biotech Firm Operating in Various US Cities?

President Joe Biden on Sept. 12 announced a new initiative designed to funnel an unspecified amount of cash into the U.S. biotechnology industry. The initiative’s aim is simple: to make the United States more efficient and reduce dependence on communist China in the biotech space.

A noble goal, no doubt.

However, to beat China, a country that seeks to lead the biotech revolution, the United States must be smart. It must, for example, keep a close eye on a Chinese-backed biotech company operating in its own backyard.

Since 2010, the U.S. tech sector has enjoyed explosive growth. But in recent times, that explosive growth has been replaced by a worrying, backward slide. While the United States remains the world leader in all things tech, China is catching up. By the end of the decade, the United States will no longer have the biggest pharmaceutical industry in the world; China will.

Moreover, as the author Tristan Bove noted, the Chinese Communist Party (CCP) “is setting itself big targets for its biotech sector, seeking to overtake U.S. market share within the next decade.”

To achieve these “big targets,” the CCP is willing to do just about anything. Remember, we are talking about China, a country renowned for espionage and intellectual property theft. The CCP’s attempts to steal the United States’ military secrets and its medical research findings are well-known. Each year, it is estimated that the CCP steals between $200 billion and $600 billion in trade secrets from the United States.

Beijing has been stealing these secrets for the best part of two decades, maybe longer.

Last month, WuXi STA, a subsidiary of WuXi, broke ground on a 190-acre biotech facility in Middletown, Delaware. The new facility is expected to be in full operation by 2026. In early September, WuXi Biologics announced plans to expand its operations in Cranbury, installing an extra 3,000 L bioreactors. According to the company’s website, the Cranbury facility “is a key piece of WuXi Biologics’ Global Dual Sourcing Strategy, ensuring that products can be manufactured, and materials sourced at multiple WuXi Biologics locations around the world.”

“By 2019, there were 15 Chinese genetic testing or genomic sequencing companies with operations in the United States,” he added.

In the same year, the biotech firm also bought a stake in 23andMe, one of the United States’ biggest DNA testing companies (23andME has sold millions of kits to Americans). Graceffo warned that the huge facility currently being built in Delaware was being financed by a CCP-approved government grant. In China, there is no such thing as a truly private company. Any Chinese companies that set up shop in foreign countries operate with the blessing of Beijing.

Readers in the United States would do well to remember that the U.S. government’s National Counterintelligence and Security Center (NCSC) has identified biotechnology as one of the key targets for foreign adversaries. This includes biomaterials, biopharmaceuticals, and various vaccine technologies. Not surprisingly, the NCSC has listed China as one of the more menacing threats to U.S. security.

William R. Evanina, a national security official who previously served as director of the U.S. National Counterintelligence and Security Center, estimates that the CCP has stolen the personal data of 200 million Americans. According to Evanina, the United States’ “economic global supremacy, stability and long-term vitality is not only at risk, but squarely in the cross hairs of Xi Jinping and the communist regime.”

This brings us back to Biden’s latest initiative. Ensuring that the United States has a more robust, more independent biotech sector is certainly something Americans on both sides of the political aisle can get behind. At the same time, however, there’s something alarming about a company with close ties to the regime in Beijing operating in various U.S. cities, especially when that company is fast becoming a biotech powerhouse.