Why I’m Thanking You for Your Service 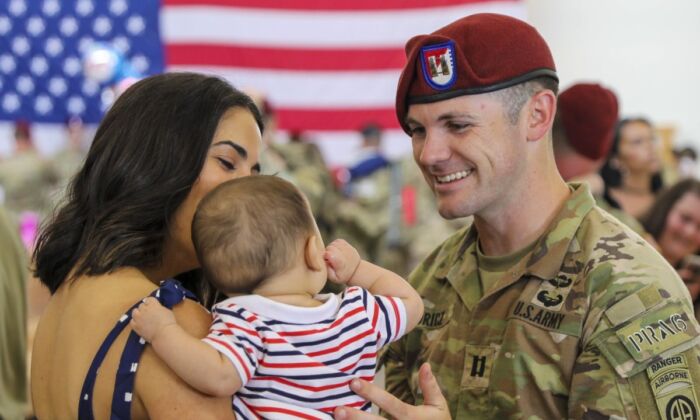 A Soldier reunites with family at Fort Bragg, N.C., on July 12, 2022, after returning home from deployment. (U.S. Army photo by Spc. Lilliana Fraser)

“Mommy, Mommy!” he said with the oh-so-cute voice only a preschooler has. “There’s one! Can we do it?”

You hear this and immediately you tense, body going on high alert. After all, you just walked in and are very conspicuous in your Army greens when everyone else in the place is dressed casually attempting to combat the rising heat of an Alabama summer.

We approach you slowly. Being eight months pregnant and attempting to hang on to a little one that is about to burst with excitement will do that to a woman. By this time, all eyes in the restaurant are on us and you have this confused look on your face. After what seems like forever we finally get to you.

“Thank you for your service,” my little one says—even louder now. In a quieter voice, I tell you that we would like to buy your lunch.

“Ma’am,” you said, turning several shades of red, “I’m just doing my job, no need to thank me.”

We pay for your lunch and start returning to our table, all the while my little one is talking about how awesome you were, how brave you must be, and how he hopes to be like you when he grows up. It may just be my imagination, but while you are waiting on your food, you seem to stand a little straighter, a little taller and there is a slight smile on your face.

Since that time, I’ve seen and read a lot about people serving in our military and police forces that don’t want to be thanked and some who are even offended by it. Well, bless their little hearts. After I run through a list of names to call them (some of them not so polite), I realize that they probably do not know who it is that I’m thanking.

I’m thanking the grandfather who shipped off to serve in WWII, not knowing if he would ever get to see his young wife again or meet his yet-unborn son. I’m thanking the father who was deployed more often than he was home, to Panama, Iran, Iraq, and often to places he can never tell us about due to the nature of his missions.

I’m thanking the brother who sends a disk of music and pictures that he would like played at his funeral to his sister because he has a bad feeling about this deployment. After all, it’s Iraq and it’s his 6th deployment and things aren’t going well.

I’m thanking the husband who put his life on hold to go build roads and infrastructure during Desert Storm. I’m thanking the sister who postponed her dreams of a family for just a little bit longer so she could rid her body of the toxins that were absorbed from her last deployment.

You who are “just” doing their job. You. You who are doing a job most Americans either can’t or won’t. A job that could cost you your marriage, your health, your sanity, or even your life. A job that “just” helps to ensure our safety, security, and prosperity. A job that inspires people to say things like “thank you for your service.”

So, once again, thank you.

This article first appeared in The Havok Journal.

Battlefields Staff
The Battlefields Staff is a diverse collective of military veterans, first responders, and their supporters, who share their thoughts and experiences on the front lines and the home front through The Epoch Times.