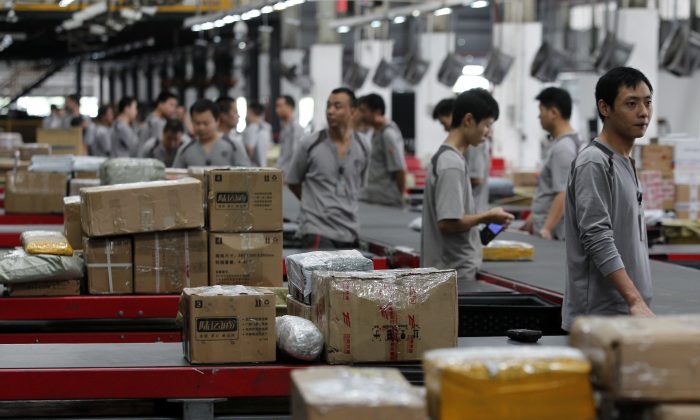 Workers distribute packs at S.F. Express in Shenzhen, China, on Nov. 11, 2013. Private companies in China have stopped to invest in further expansion in 2016. (ChinaFotoPress/ChinaFotoPress via Getty Images)
Business

Previously the engine of relatively efficient growth, it looks like the private sector has given up in China. Investment by private companies went negative in June and decreased another 0.6 percent in July. That’s right, negative growth month over month, something completely unfathomable during the boom years of above 20 percent growth just a few years ago.

For the first half of 2016, private investment is up only 2.4 percent over the year. This is worrying because the private sector is responsible for most of China’s real economic development and relatively efficient capital allocation.

The government will try to co-opt the private sector into spending through monetary and fiscal policies.
— Viktor Shvets, global strategist, Macquarie Securities

To balance the decline in private investment, the state used SOEs as countercylical fiscal policy instruments. SOEs’ share of investment in fixed assets rose 23.5 percent compared to the first half of 2015. Because of inefficient investments from years prior, overcapacity, and mounting defaults, Morgan Stanley thinks this is ill-advised.

Morgan Stanley notes that private companies are avoiding sectors such as mining and steel, which are plagued by overcapacity. But they also cannot invest in the service sector as they please because of high entry barriers and too much regulation.

Private investment outside of manufacturing—read services—declined 1.1 percent in the first half of 2016 over the year, compared to 15 percent growth in 2015. SOEs, on the other hand, boosted investment in services 39.6 percent.

So much for a successful rebalancing to services, which has been considered a linchpin of the effort to reform the Chinese economy. It’s happening, but at the behest of the state.

Overall, there just aren’t enough good investment opportunities around and the borrowing costs for private firms are as high as 15 percent, much higher than the return on assets. Unlike their state-owned counterparts, private companies actually try to be profitable—and they don’t see profits in China’s slowing economy.

In addition, the lack of progress in the much-touted reform agenda hurts business confidence and financial visibility. Zhang Qiurong, who owns a specialty paper business, told The Wall Street Journal: “The economic outlook is really grim. You have to survive, that comes first.”

Mr. Zhang’s feelings are reflected in the China Economic Policy Uncertainty Index, which has been increasing steadily in 2016, almost reaching the record levels of uncertainty seen during the last handover of Communist Party leadership in 2012.

The economic outlook is really grim. You have to survive, that comes first.
— Zhang Qiurong

The result of the uncertainty? Companies are stashing money at the bank and just won’t spend and invest it.

“Despite loads of liquidity pumped into the market, enterprises would rather bank the money in current accounts in the absence of good investment options, which is in line with record low private investment data,” said Sheng Songcheng, head of statistics and analysis at the People’s Bank of China (PBOC), as reported by the South China Morning Post earlier this year.

Cash and short-term deposits at banks grew 25.4 percent in July.

“The government will try to co-opt the private sector into spending through monetary and fiscal policies,” says Viktor Shvets, global strategist at Macquarie Securities.

The problem is that this strategy is unlikely to work.

“The impact of PPP on China’s investment growth is likely to be limited, considering the small share of PPP projects in execution (less than 0.5% of total [investment]), the still low participation ratio by private investors … International experience shows that private financing of public investment entails large fiscal risks in the absence of a good legal and institutional setup,” writes Morgan Stanley. And a good legal and institutional setup is not what China is known for.

If the PPP and short-term monetary and fiscal stimulus won’t work, China actually has to deliver on reforms to get the private sector to spend again.