Why Has ‘Global Warming’ Disappeared? 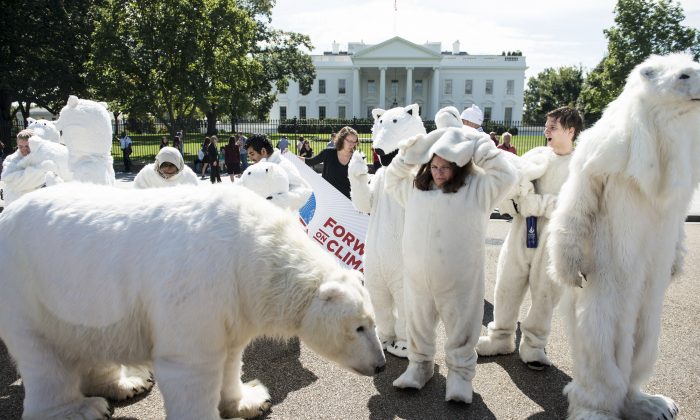 Activists remove polar bear costumes on Pennsylvania Avenue in front of the White House after a protest in Washington, D.C. on Sept. 26, 2013. The polar bear has become a symbol of concerns about global warming. (Brendan Smialowski/AFP/Getty Images)

After President Joe Biden entered the White House, he created a position that had never existed before in the history of the White House—“climate envoy”—and climate policy was elevated to a level of unprecedented importance by Biden and the forces behind him.

What’s wrong with the global warming hypothesis and what does its disappearance mean? If you try to analyze the past and present of the climate policies of various countries, you’ll come to understand why “global warming” has disappeared.

The Origin of the Global Warming Hypothesis

What exactly is global warming?

According to U.S. Environmental Protection Agency, greenhouse gases trap heat and make the planet warmer. Human activities are responsible for almost all of the increase in greenhouse gases in the atmosphere over the past 150 years.

Such wording indicates that the term “global warming” isn’t a definitive, scientifically indisputable conclusion. Therefore, it can only serve as a vague concept that some people choose to believe in. Moreover, no one can prove that it’s definitely human activities that lead to global warming.

Now that we have noticed that this term is disappearing from government documents, it implies that the global warming hypothesis may not be well grounded.

The Earth’s surface temperature is always changing. The temperature change is usually fluctuating, and there are natural climate cycles. Each cycle may last several decades, or even millions of years. The fluctuation of the surface temperature may be regional or global, and the factors causing these changes are numerous and mostly due to natural factors, including solar radiation, changes in the Earth’s orbit, continental drift, changes in ocean currents, and orogenic movements.

These natural factors are beyond human control. Of course, changes in surface temperature may also be related to human activities, such as greenhouse gas emissions.

However, if we attribute all the changes in surface temperature to human economic activities, exaggerate short-term changes in temperature as permanent, irreversible changes, or interpret temperature fluctuations as a linear trend, it would be seriously misleading.

There are several natural factors that affect the surface temperature. First and foremost, the drift of the continental plates causes changes in the location and surface area of land and ocean, thus affecting the global atmospheric circulation and resulting in global or regional temperature changes.

Secondly, the orogenic movement of the Earth’s crust may form mountains or valleys, and changes in the topography cause precipitation in the terrain and even the formation of alpine glaciers.

Thirdly, the sun is the most important external energy source for the Earth, and its activities will affect the Earth’s surface temperature. Its short-term radiation fluctuations, such as sunspot activity with an 11-year cycle and a radiation change with a cycle of 20-plus years, all have an impact on the Earth’s climate. The changes in sunspots with an 11-year cycle will induce a change of 1.5 degrees Celsius of the Earth’s stratospheric temperature, making high latitudes colder and low latitudes hotter. Based on observations of temperature changes from 1900 to 1950, this change was likely the cause of the Little Ice Age.

Lastly, the ocean currents have a huge impact on the Earth’s surface temperature. The stream produced by the Gulf of Mexico alone emits more heat than the world’s annual coal-burning heat. The cycle of ocean current climate change is several years or decades. Changes in ocean currents can also cause climate changes, such as the El Niño phenomenon in the eastern Pacific Ocean.

So far, the scientific community has very limited knowledge of how these natural factors affect climate change, and scientists cannot describe or explain them clearly. However, because temperature changes can be measured easily on the surface of the Earth, some people focus on the study of surface temperature records while ignoring the influence of all natural factors and use carbon dioxide emissions to explain the short-term temperature changes on the Earth, which lead to the global warming hypothesis.

Can We Trust UN’s Climate Assessment?

In the course of human history, it has always been believed that climate change is caused by natural factors.

However, before the Copenhagen Climate Conference in 2009, the media in some countries condemned IPCC. This was due to the discovery that when the committee found that the mathematical model produced by the experts it hired showed a tendency of temperature decline in the future, those same experts had deleted all relevant data in the report to cover it up.

Can the committee’s dubious mathematical model accurately predict the Earth’s climate 300 years from now? Even a 30-year forecast isn’t reliable.

“Global warming” literally means that most places on Earth will continue to become hotter and hotter, and will never return to the cooler temperatures in place prior to it.

However, in 2009, it was unusually cold in many parts of the world. Since then, more and more people began to question the concept of global warming. Some in the scientific community also began to question IPCC’s climate change report.

For example, Michael Mann, a climatologist and geophysicist at Pennsylvania State University, has always argued in favor of the global warming theory. After calculating the climate for the past 1,000 years, he concluded that the temperature would reach its peak at the end of the 20th century. However, an expert team from the Committee on National Statistics, National Academies, announced that Mann’s method violated basic mathematical principles.

What’s even more shocking is that when the email communications of Phil Jones, director of the UK Climate Research Centre and a leading advocate of global warming, were hacked and leaked, it was discovered that he had asked a collaborator to cover up problems with the temperature data from the Chinese weather stations in order to validate global warming. The data manipulation not only exaggerated climate warming, but also deleted data regarding annual rings of ancient trees that showed temperature changes over a long period of time.

Moreover, many regions in the United States experienced frigid weather in February this year, which once again disproved the global warming assertion.

Then-U.S. President Donald Trump announced the United States’ withdrawal from the Paris Agreement on climate change shortly after taking office. He believes that global warming is a hoax, and he has a good basis for this judgment, as discussed above.

Let’s think about this question: Does the United States have to abide by the global climate policy specified by the United Nations and follow those “politically correct” people who trumpet the global warming crisis?

It seems that as long as a statement is stamped with a United Nations seal, it immediately carries a sense of authority that leaves people in awe. In fact, the U.N. agencies don’t represent a global authority, because the United Nations’ reputation isn’t good at all. It has long been reduced as a tool for developing countries to blackmail developed countries. For instance, the U.N. Human Rights Commission has failed to stop evil regimes from committing human rights abuses, such as helping the authoritarian Chinese Communist Party evade justice.

The United Nations operates according to the rule of “one country, one vote,” and many developing countries support the claim of global warming simply because they would support any argument that ends up granting them money.

The Paris Agreement—aimed to respond to global climate change—requires developed countries to contribute money to developing countries to help them reduce carbon dioxide emissions. China is also one of the beneficiaries.

Not long ago, the spokesperson of the CCP’s Foreign Affairs Ministry, Zhao Lijian, stated that China would demand the United States make up for the “long-overdue payment to the Green Climate Fund” owed to China during Trump’s term.

The CCP can basically achieve whatever it wants in the United Nations because it knows how to cater to and buy out corrupt elites in developing countries. Of course, there are also corrupt elites in developed countries. The CCP is able to manipulate the United Nations and other international organizations, getting whatever it demands, precisely because it knows how to bribe influential elites of various countries.

While those developing countries get the money they want from developed countries by supporting the Paris Agreement, the elites in Western developed countries may also have increased their wealth from these climate fund projects. Just like decades of unchanged food development projects by the U.N. Food and Agriculture Organization for African countries, no matter how much money has been injected into these projects, it’ll never improve the backward status of agriculture in those countries—but it can definitely improve the family wealth of corrupt officials in the countries involved.

Is global warming real or fake? Is the global temperature heating up or cooling down? It’s always a protracted debate. It needs to be pointed out that research on global warming has actually become an industry and a job opportunity for a group of people. For those people, only by catering to the government’s attention to the negative impacts of global warming can they obtain research funding to support their research institute. Therefore, they always align their research conclusions with government directions.

As to why politicians advocate climate policy—to the point it has become political correctness in the United States—it’s because this issue has a very complicated relationship with their political and economic agenda.

The absurdity of the global warming theory lies in the fact that it lacks solid scientific validation, yet its advocates dare to hype it up to the extreme in order to indoctrinate the general public.

I believe things will turn around by the time they reach an extreme, and the truth about global warming will soon emerge.

Cheng Xiaonong
Contributor
Dr. Cheng Xiaonong is a scholar of China’s politics and economy based in New Jersey. Cheng was a policy researcher and aide to the former Party leader Zhao Ziyang, when Zhao was premier. He also served as chief editor of the journal Modern China Studies.