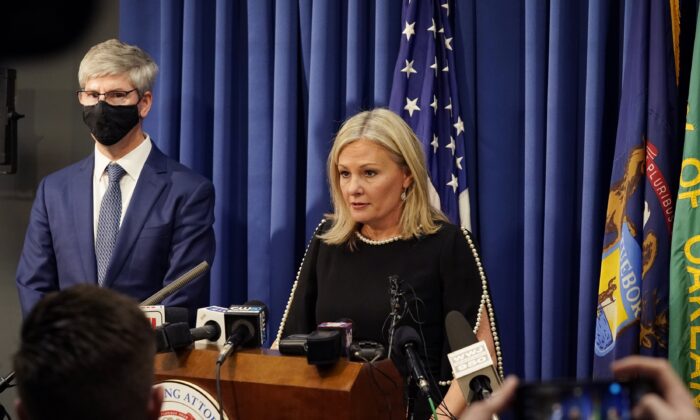 Why Gun Storage Laws Would Do More Harm Than Good

“Michigan’s laws are woefully inadequate,” Oakland County Prosecutor Karen McDonald announced at a press conference. “We [Michigan] don’t have a safe storage law. We’re not legally required to store your weapon in a safe manner. Children are allowed to attend [gun ranges] with their parents. … We don’t have strong enough laws.”

We all want to do something when tragedies such as this one occur, but more lives will be lost than saved if we mandate that everyone lock up their guns.

Gun storage is primarily designed to prevent accidental gun deaths of children. According to the Centers for Disease Control and Prevention, Michigan averaged less than two accidental gun deaths a year for those younger than 18 from 2010 to 2019. That’s about half the rate of such deaths nationwide.

This disparity must be a puzzle for gun control advocates, since a significantly larger percentage of Michigan households have guns and the state doesn’t have the gun “safety” laws that other states have enacted.

But now, the media and some politicians believe that gun locks will help prevent mass public shootings by juveniles. Very few shootings have involved guns stolen from parents. In 2012, Adam Lanza stole his mother’s gun, even though she kept it in a safe. But he was 20. Similarly, Nikolas Cruz was 19 when he killed 17 people at Marjory Stoneman Douglas High School in Parkland, Florida. So, a new law mandating locks when someone younger than 18 lives in the house would have made no difference in his case.

Since 2000, including Oxford, there have been four U.S. mass public shootings by juvenile killers in any venue. But the Red Lake, Minnesota, attack in 2005 was committed by a 17-year-old who killed his grandfather, who was an Indian reservation police officer, and then took his service weapons. Fifteen-year-old Jaylen Fryberg, who committed the Marysville, Washington, shootings in 2014, stole the gun from his father, whose possession of it was illegal because there was a permanent restraining order against him. Would he have legally stored his illegally possessed gun? Again, it appears unlikely that gun locks would have stopped those attacks.

According to my research, which has been published in the Journal of Law and Economics and elsewhere, such laws make it more difficult for people to defend themselves and their families successfully. As a result, criminals became more emboldened to invade people’s homes. There have been 300 more total murders and 4,000 more rapes occurring each year in states with these laws. Burglaries are also dramatically higher.

If you want to see the importance of deterrence, consider so-called hot burglaries, where residents are at home when criminals strike. The UK not only has twice the burglary rate as the United States, but 59 percent of break-ins there are hot burglaries. By contrast, the United States has a hot burglary rate of 13 percent. Consistent with this, surveys of convicted burglars in the two countries indicate that American criminals spend about twice as much time casing a home before they break in. The reason? They want to ensure that no one is home because it prevents them from getting shot. Similarly, American burglars frequently comment that they avoid late-night break-ins because ‘‘that’s the way to get shot.” These are concerns that British burglars don’t share, given that nation’s strict gun laws.

In the same vein, it’s not surprising that crime rises when governments prevent people from defending themselves. Indeed, every place in the world that has banned guns has seen an increase in murders.

If locking up guns could have prevented all four of the mass shootings committed by people younger than 18 since 2000, there would have been 21 fewer deaths and 19 fewer people wounded. Of course, these killers could have obtained weapons in other ways. But for the sake of argument, let’s accept this number. One can add in the annual number of accidental gun deaths and assume that these would also have been prevented. But the final number would still be only a fraction of those who die in a single year because states with mandatory locks kept people from getting to their guns in time.

Unless you send your child to play at a violent criminal’s home, your child is exceedingly unlikely to get shot at a gun owner’s home. It makes much more sense to check for a criminal history than to learn whether they own guns.

We see news stories about the horrible deaths and injuries from school shootings. And rightly so. But we don’t hear about the deaths that occur because people can’t readily access a gun to protect themselves and their families. These latter deaths are no less horrific.

The national media rarely covers instances where young children use guns to save someone’s life. I found 11 cases that got local news coverage where a juvenile used a gun to save someone’s life. On June 30, a 12-year-old Louisiana boy used a hunting rifle to stop an armed burglar threatening his mother’s life during a home invasion. On Feb. 13, after two masked men broke into a North Carolina house and shot a 73-year-old woman in the leg, another 12-year-old shot the intruders in self-defense, causing them to flee. In St. Louis on June 16, a 13-year-old shot his father as he was choking his mother. And the news media also misses the vast majority of defensive gun uses.

Completely absent is a discussion of what will really protect schoolchildren: letting teachers or staff carry guns at school. Twenty states allow this under a variety of rules. Some states have had these rules for decades. The Crime Prevention Research Center, of which I am the president, has released a report looking at school shootings of all types in the United States from 2000 through 2018. Outside of suicides or gang violence, often in the wee hours of the morning, there has not been a single case of someone being wounded or killed from a shooting at any of the schools that have armed teachers.

The attack in Michigan occurred in yet another school where teachers and staff were defenseless. Even when uniformed security officers are present, they have an almost impossible job. These killers can wait for the officer to leave the area before attacking or shoot the officer first. Once the officer is killed, the shooters have free rein to go after everybody else. Having armed teachers carrying concealed firearms takes away that tactical advantage and even makes the officer’s job much safer as the attacker must worry that another unidentified person might be able to stop him when he shoots the officer.

We need to approve whichever laws save the most lives. What we don’t need are any more laws that leave people defenseless.