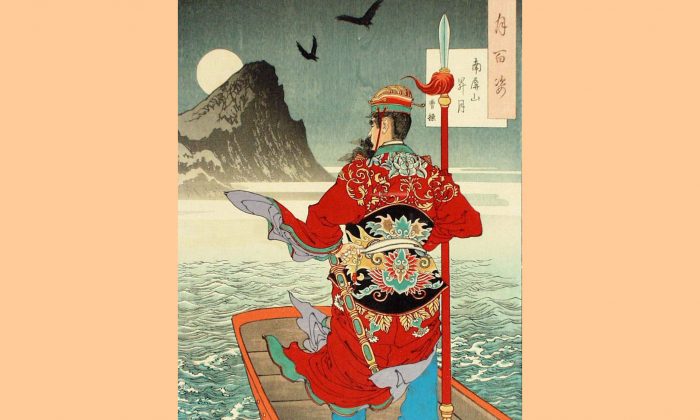 This painting depicts Cao Cao staring at Nanping Mountain in a full moon before the Chibi Battle. It comes from the painting series ‘One Hundred Aspects of the Moon’ by Japanese Edo period ukiyo-e artist Yoshitoshi. (Public domain)
China

Why ‘Ghostwriting’ in Chinese Reads as ‘Holding a Scimitar’?

To write articles or draft speeches for others in English is called “ghostwriting”.  However, the literal wording in Chinese is “holding a scimitar”, not holding a pen. It originates from a historical story that concerns Cao Cao during the Three Kingdoms period.

According to “A New Account of the Tales of the World”, from the Liu Song dynasty (420-479), Cao Cao, King of Wei, became well known after he unified Northern China and a lot of minorities came to join his syndicate.

One day, the Xiongnu, an alliance of nomadic tribes that lived in the region of today’s Mongolia, sent an envoy to meet Cao Cao.

Cao Cao thought himself of weak build and that his image was not a towering one that could intimidate and convince the envoy that his nation should be known for its bravery.

In those days, Chinese men were generally of bigger build and of better appearance than those of today. According to historical records, it was common for men to measure over 5.9 feet tall (1.8m). However, from archives and archaeological findings, the great ruler Cao Cao measured about 5.25 feet tall (1.6m).

To impress the Xiongnu envoy, Cao Cao ordered his subordinate Cui Yan to take his place during the reception.

Cui Yan was tall and handsome and wore a long beard. He sat composed in the middle of the bed and spoke in a beautiful tone to receive the envoy. Cao Cao stood at the bedside and looked like a guard holding a scimitar.

After the meeting, Cao Cao sent someone to enquire about the envoy’s impression:  “How did you find the King of Wei”, he asked.

“The King of Wei looks elegant prestigious and outstanding, but the one holding a scimitar at his side was extraordinary. I think that one is a genuine hero!” the envoy said.

Everyone displays his or her inner bearing. The Xiongnu envoy could identify a true hero so he was an extraordinary man as well!

From then onwards, the meaning of “holding a scimitar” was extended to describe a ‘ghostwriter’.

•  Cao Cao a Ruler with Great Tolerance and Acceptance

•  The Magnanimous Character of Cao Cao and his Great Grandfather