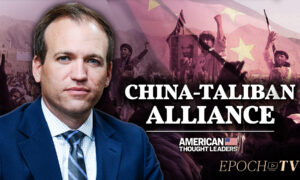 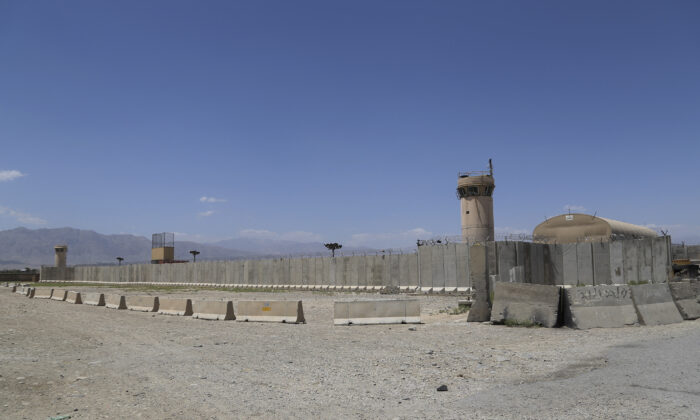 A view of Bagram Air Base after all U.S. and NATO troops left, some 43 miles north of Kabul, Afghanistan, on July 2, 2021. (Zakeria Hashimi/AFP via Getty Images)
Viewpoints

Why Did the US Hand Afghanistan to China?

Paul Shinkman of U.S. News and World Report wrote the other day:

“The Chinese military is currently conducting a feasibility study about the effect of sending workers, soldiers and other staff related to its foreign economic investment program known as the Belt and Road Initiative in the coming years to Bagram, according to a source briefed on the study by Chinese military officials, who spoke to U.S. News on the condition of anonymity.”

As Moon Unit Zappa used to say, “Gag me with a spoon!”

Feasibility study? You don’t have to be Nostradamus to figure out how that’s going to turn out, assuming it hasn’t been done already and this is just a masquerade.

Why wouldn’t the Chinese take over Bagram? It’s sitting there.

No real estate could be more apt for their Belt and Road Initiative (BRI, also known as One Belt, One Road), essentially a large-scale bait-and-switch operation. The Chinese—in reality, the Chinese Communist Party—lends the poor country—in this case, the impoverished Taliban—money to modernize their infrastructure with the caveat that, if they don’t pay off the loan in a certain amount of time, guess who owns said infrastructure?

Well, we know the answer to that. The Chinese are in essence buying the world with the help, note well, of some of the most prominent U.S. firms (pdf) busy enriching themselves with more money than most of us can compute.

(If you’re interested in how successful the BRI has been, here’s a helpful map from the Council of Foreign Relations.)

What has occurred in recent days is that China has achieved something absolutely free for which the Soviets and the United States wasted decades of personnel (tragically dead or wounded), matériel, and trillions of dollars, not to mention ending up disgracing themselves in the eyes of the world.

Effectively, the Chinese own Afghanistan, the important parts of it anyway—air bases, ports, mineral rights, and so forth—or will shortly.

As for internal Taliban affairs, the Chinese communists aren’t about to lift a finger about the horrifying level of women’s rights or the extensive drug-growing or dealings that the terror group engages in, especially if they send as much of it as possible to America.

As long as the various Islamic terror organizations leave the Chinese alone, the Chinese will let them do as they wish. Yes, some—al-Qaeda, ISIS-K, one we haven’t heard of yet—may make a fuss about the treatment of the Uyghurs and make their violent presence known, but I would imagine they ultimately see the Chinese forces as much more ruthless than the Americans (now, especially) and this will be at best a temporary sideshow of little global importance.

Realpolitik will be at play on both the Chinese and Taliban (Islamic) sides as they benefit each other, at least for now.

So how did we get here? If this is all so obvious—and it is—wasn’t our State Department and our military aware of how this would, or certainly could, turn out? (Wouldn’t they at least leave a small NATO force guarding Bagram and destroy our weaponry?)

I imagine many of our officials were—how could they not be—aware of this eventuality. And that’s highly disturbing.

Why then did the United States cede Afghanistan—a territory bound by Iran and Pakistan, among other states, not to mention control of much of the world’s rare earth minerals and other key resources—to the increasingly totalitarian China of Xi Jinping?

For an answer, it’s hard not to think back to those days when, shortly before declaring for the presidency and reversing himself on the topic, our current president told us “The Chinese aren’t our enemies, folks.”

Was he covering up for his own activities and connections that could have been recorded on his son Hunter Biden’s laptop, much of which is as yet unseen? Do the Chinese, in the crudest sense, have something on him? Unfortunately, considering the operations and governance of our FBI and Department of Justice, we may never know.

We can, however, make our own surmises. But whatever they may be, they’re only a part of a more depressing overall zeitgeist.

I have believed for some time—only underscored by our extraordinarily rapid and ill-conceived evacuation of Afghanistan, leaving behind not only Bagram but enough U.S. weaponry to make the Taliban’s army nearly equivalent to Italy’s, not to mention putting our advanced military technology in the hands of the Chinese and the Russians—that a large percentage of our Democratic Party leadership, as well as a tragically significant percentage of the GOP, have long believed the Chinese regime is winning the battle between China and America for global hegemony.

They are, therefore, overtly or covertly, consciously or subconsciously, throwing in with the Chinese side for their own economic advantage, and, to a lesser extent, their survival, though the two intersect.

Our globalist-leaning corporations, such as the giant law firm linked above, that deal extensively with China are similar. They’re going with what they think is the winning side.

And globalism isn’t democracy. For the globalists, people voting has been irrelevant, even retrograde, for decades. It’s the one-party state gone worldwide.

So, to be overly colloquial, “bugging out” on Afghanistan to them is no big deal. And China taking over, well, to them it’s just part of the game.