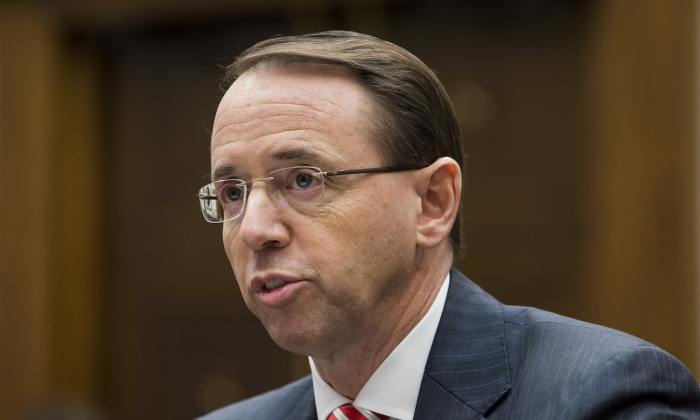 Why Was the Rosenstein Interview Postponed?

A classified interview with Deputy Attorney General Rod Rosenstein that was planned for Oct. 24 has been postponed indefinitely, the chairmen of two congressional committees announced.

An announcement about the postponement was made jointly Oct. 23 by House Judiciary Chairman Bob Goodlatte (R-Va.) and House Oversight and Government Reform Chairman Trey Gowdy (R-S.C.):

“The Committees are unable to ask all questions of Deputy Attorney General Rod Rosenstein within the time allotted for tomorrow’s transcribed interview, therefore, the interview will be postponed. Mr. Rosenstein has indicated his willingness to testify before the Judiciary and Oversight committees in the coming weeks, in either a transcribed interview or a public setting. We appreciate his willingness to appear and will announce further details once it has been rescheduled,” the statement read.

The scheduled interview included a somewhat unusual structure: It was to be conducted in a secure setting so “all relevant questions can be asked and answered without regard to classification,” and additionally, the interview was going to be under oath. A transcript was to made publicly available at a later time.

Much has been made of reports that Rosenstein allegedly discussed wearing a wire to record President Donald Trump.

Lost in events has been the fact that the alleged comments by Rosenstein occurred at a meeting where then-Deputy FBI Director Andrew McCabe was reportedly “pushing for the Justice Department to open an investigation into the president.” McCabe was also the source of the accusations against Rosenstein.

Goodlatte has personally indicated a healthy skepticism to those claims, noting in an interview with Fox News’s Maria Bartiromo that “we have all of this based upon a newspaper report.”

“We have third-party testimony that we’ve heard in our investigation. We know he’s met with President Trump. President Trump has been satisfied and said that he wants him to continue on as his No. 2 at the Department of Justice,” Goodlatte said. “But the Congress has oversight responsibilities, so we’re gonna ask him about those questions, along with many other things.”

There is a likely explanation for the way the interview was structured that goes beyond the questions regarding the alleged reports of Rosenstein discussing wearing a wire.

The special counsel probe by Robert Mueller appears to be winding down. Meanwhile, Department of Justice Inspector General Michael Horowitz has been conducting an ongoing investigation of alleged FISA abuse since March 28. That investigation is likely nearing the final stages and a report could be released in the next couple of months—perhaps sooner.

The interview arrangement with Rosenstein was specifically tailored to curtail any leaks. Rosenstein, who isn’t under any requirement to attend the interview, has as much information on these two investigations as anyone in the Justice Department.

Given the proximity of the finalization of the Mueller probe, and the Inspector General’s investigation into FISA abuse, a status update on these matters from Rosenstein is likely. Goodlatte structured the interview with those disclosures in mind.

Whatever Rosenstein was going to say, actions taken in preparation for the interview by Goodlatte and Gowdy indicate they believed it was highly important. There was simply no chance of leaking from the meeting—it would have been immediately apparent who had done so.

Several points from the rescheduling announcement:

There are several plausible explanations for the delay.

With only days remaining before the midterms, the language in the announcement—“in the coming weeks”—appears to imply a post-election rescheduling. The perceived outcome of the midterms may play a role in the decision by Goodlatte and Gowdy to delay Rosenstein’s interview. Poll data is now looking increasingly favorable to Republicans.

Potential information gained from a Rosenstein interview might be seen as more valuable from a post-election vantage point. If Gowdy and Goodlatte perceived the House as “safe,” the need for immediate information, a possible “October surprise” from Rosenstein, may have diminished. In fact, it might now be seen as either wasted or even possibly a negative.

Another possible explanation may be sitting in plain sight. Gowdy and Goodlatte stated that they would be unable to ask all the relevant questions of Rosenstein in the time allotted. But it was Gowdy and Goodlatte who personally structured and scheduled the entirety of the meeting.

It seems strange they would fail to allot enough time for all of their questions—questions that were almost certainly known in advance of the scheduling framework. That is, unless new information suddenly became available subsequent to the initial scheduling. Information that was significant and potentially transformative—the kind of information that alters the basic structure of the interview.

“This, in fact, was a proposal that Chairman Gowdy and I put forward in order to get a full, transparent discussion in a closed room, where you have the opportunity to ask any question that needs to be asked … have it in a classified setting and not be concerned about leaks,” Goodlatte said.

Also, Rosenstein didn’t back out of the interview. The release from Goodlatte and Gowdy makes clear who did the canceling. They also specifically note Rosenstein remains willing to engage in a future interview—including one that could occur in a public setting.

With the likelihood of new information becoming available, this new twist may prove as important as anything in the announcement.

The original interview was to take place prior to the midterm elections and the process was structured to be airtight. Leakproof.

Now, with the possibility of a favorable post-election environment, Goodlatte and Gowdy are actively considering public testimony from Rosenstein. More likely, there may end up being two sets of interviews with Rosenstein: the first being classified and transcribed, then cleared for public consumption, followed by public testimony before the joint committee, conducted by Goodlatte and Gowdy.

Public forums in which to question Rosenstein are somewhat limited and aren’t to be squandered. If Goodlatte and Gowdy are now considering public testimony from Rosenstein, it would seem that releases from the Mueller and Inspector General investigations may be closer than previously thought.

Once these investigations have been made public, questions posed to Rosenstein become more useful and valuable—as do his answers.