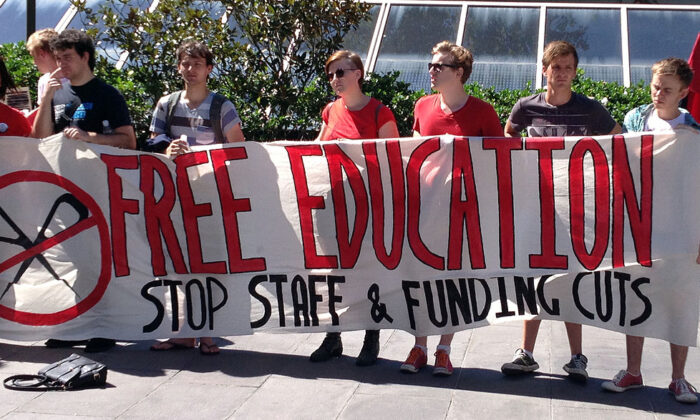 University students hold a banner during a protest rally in Sydney, Australia, on March 27, 2013. (Saeed Khan/AFP via Getty Images)
Viewpoints 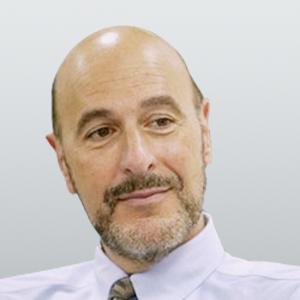 A nanosecond after U.S. President Joe Biden announced the partial cancellation of American student loans, a collection of interest groups demanded the Australian government do the same.

The government should not comply. Cancelling Australian student loans is unfair, unnecessary, and unlikely to influence the courses that students choose to study.

Why Is It Unfair?

Contrary to the rhetoric of some interest groups, forgiving student debt does not make education “free.”

As long as academics wish to be paid for their work, education can never be free.

The government currently collects around $4 billion (US$2.7 billion) yearly from student loan repayments. If graduates’ debts are forgiven, the average Australian taxpayer (including low-paid workers who never had the opportunity to attend a university) will have to make up the shortfall.

Taxpayers already pay part of the interest on student loans, and they also absorb the loss if graduates never earn enough money to repay their loans.

Modest taxpayer contributions are acceptable because we all benefit from an educated society.

But income-contingent loans also create what economists call “moral hazard” (a willingness to take risks when someone else bears the consequences). Cancelling debts magnifies moral hazard adding to the costs taxpayers must absorb.

Universities are the marshalling yards for the gravy train of life. Graduates enter lucrative careers inaccessible without a degree. They also build influential networks at university that help them advance in business and society.

Taxing the low-paid to cancel the loans of better-paid graduates is highly regressive; it is like taxing beer to subsidise champagne.

Cancelling loans will also add to the money supply stoking the inflationary fire that disproportionally affects lower-paid workers. Finally, cancelling graduate debts makes fools of those who repaid their loans.

Most American student loans work like mortgages. Graduates must make periodic payments until they repay their debt plus interest. If they lose their jobs or work only part-time, graduates are still liable to make payments. If they default, their credit ratings will be adversely affected, making it difficult for them to finance a car or buy a house.

Australian student loans are fundamentally different. Default is impossible because payments are matched to a graduate’s income. Those who lose their jobs, take time off to have children or earn less than the repayment income threshold ($48,361) have no obligation to repay their loans. Cancelling the loans of graduates who are not required to pay is simply unnecessary.

Some naïve Australian politicians believe that offering “free” education will motivate students to choose specific courses of study. For example, facing a shortage of nurses, the Victorian government offered to pay the tuition loans of nursing graduates.

The idea is to encourage more students to study nursing by retrospectively making their tuition free. Time will tell if the Victorian strategy works—but if history is a guide, it probably won’t.

When the UK government allowed English universities to increase their fees, some institutions held back, hoping low prices would attract students. However, these institutions quickly discovered their tactic did not work.

Like Australians, English students do not have to pay fees while studying. Loan repayments are not due until years later when students are working. The delay between incurring the debt and paying it back mutes the influence of prices.

The only truly price-sensitive students are international students who are not eligible for student loans and must pay their tuition fees upfront. Ironically, these students do not seek the cheapest university. Instead, they prefer more expensive courses as they view high prices as indicators of high quality.

Most Australian students choose their courses out of interest; they are not price-sensitive. But they are not silly. A dollar in your hand today is more valuable than a dollar knocked off your loan years from now.

Thus, the Victorian government should consider enticing students into studying nursing by contributing to their living costs today while they are learning, rather than paying their loans after they graduate and can afford to repay them.

In summary, income-contingent loans, like those used in Australia, make access to higher education dependent on brains rather than bankbooks. Therefore, cancelling them is unfair, unnecessary, and unlikely to influence course choices.

Of course, students would like to see their loans forgiven. But, unfortunately, robbing Peter to pay Paul will always win Paul’s approval.

But cancelling loans will impose a high cost on the economy, antagonise those who have faithfully paid their debts, do nothing to entice students to study certain subjects, and violate our egalitarian ideals.