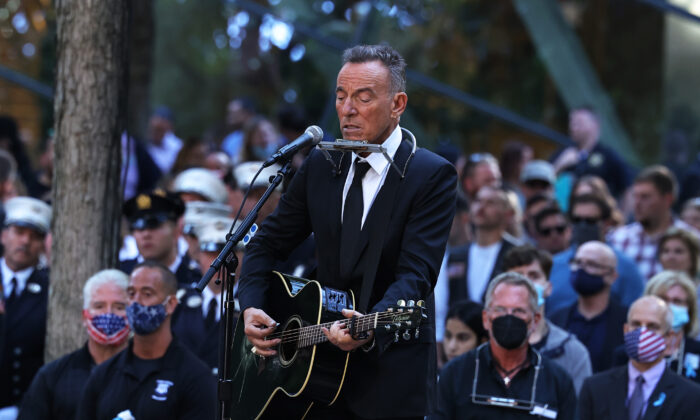 It’s been several days since, during a taped interview with CBS Sunday Morning, Barack Obama and Bruce Springsteen had some incendiary things to say about Bruce’s fans regarding the rock star’s partnership with black saxophonist Clarence Clemons.

Springsteen: “Well, It was not intellectual. It was emotional. It was the language of the heart. But it was incredibly visual, you know. And for a long period of time, you know, that was a story we told on stage, you know, which was, like I say, it was more valuable than the stories I wrote in my music, you know.”

Obama: “In an ideal world what Bruce and Clarence portrayed on stage was essentially a reconciliation, right? Redemption.”

Obama: “But most of your audiences were primarily white. And they can love Clarence when he’s onstage, but if they ran into him in a bar, suddenly…”

I call BS. In fact, not just minor league BS, but big time BS, and not just because the arrogant Bruce threw his fans, who made him incredibly rich and famous, under the bus.

That’s bad enough, but something more insidious is going on here.

First allow me to go back in time a little. I am older than both Springsteen and Obama, but was, in my teen years, a huge rock and roll and jazz fan. I couldn’t get enough of either.

That means I got to see in concert, and sometimes in night clubs I snuck into under age, the black and white Chuck Berry, Jerry Lee Lewis, Little Richard (whom I later came to know), the Everly Brothers, Fats Domino, Frankie Lymon (a favorite), Bill Haley, Miles Davis, John Coltrane, Bill Evans (with Miles), Sonny Rollins, Gerry Mulligan (with Rollins), Thelonious Monk (with Mulligan), among others.

That was the 1950s, of course, and even then blacks and whites were playing together regularly on the same bill or on Alan Freed’s show on ABC that debuted in 1957.

Springsteen may have thought he was doing something original, playing with Clemons, but it was already old hat.

And maybe I was naive. Maybe I missed something. But not once, not a single time, did I hear anyone use the n-word in the music world or anywhere near it then. It was already considered literally a sin to use it, something employed by racist sheriffs, not rock or jazz fans.

(This was all, by the way, before Barack Obama was born. Springsteen was a tyke.)

It wasn’t until rap came along that I began to hear the n-word spoken aloud, and then out of the mouths of black rappers.

I was never a big Springsteen fan. Perhaps I was too old at that point. But I find it impossible to believe that his fans, almost all of whom idolized Clarence Clemons, were secretly using the n-word behind the saxophonist’s back. Maybe about four or five people of the millions who listened to the band, if that many. In other words, negligible and meaningless.

So what were Obama and Springsteen up to in their exchange?

Bruce may have been mindlessly going along with Barack, trying to be “cool” or what’s left of that tired concept, but what Obama was doing was intentional.

We live in an era when racism is being recreated for political gain. Critical Race Theory has that intention as has the rise of Black Lives Matter and the consequent doctrine of “anti-racism.”

Their goal, conscious or not, but most often conscious, is and was to revive the racism in our country that was clearly diminishing, to bring back racism for political purposes.

In Obama’s case, that is intimately tied to the power of the Democratic Party that he still leads, though Biden, I suppose, is titularly its leader. (Few believe that.)

Obama knows that. We all know that.

It is one of the great tragedies of American life. Obama was fanning it. He has been for a long time.

So let’s go back and fill in the real answer to Obama’s leading… ‘But most of your audiences were primarily white. And they can love Clarence when he’s onstage, but if they ran into him in a bar, suddenly…’

The real answer: ‘They’d be asking him for his autograph or a selfie, while offering to buy him a drink.’