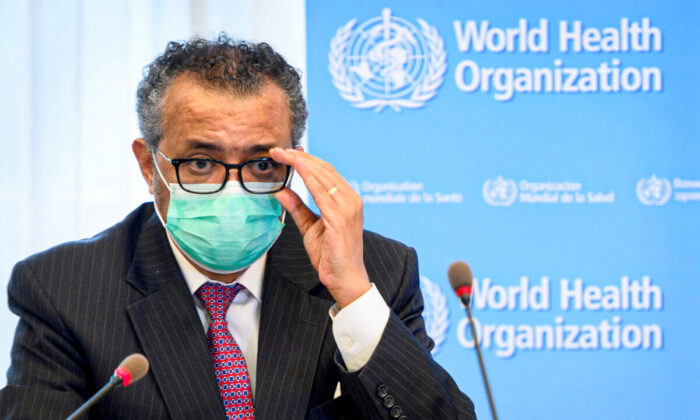 World Health Organization (WHO) Director General Tedros Adhanom Ghebreyesus at the opening of the 74th World Health Assembly at the WHO headquarters, in Geneva, Switzerland, on May 24, 2021. (Laurent Gillieron/Pool via Reuters)
WORLD

WHO’s Tedros Concerned About ‘False Sense of Security’ From Vaccines, Warns Pandemic Not Over

World Health Organisation (WHO) director-general Tedros Adhanom Ghebreyesus on Wednesday shared his concerns over what he calls is a “false sense of security that vaccines have ended the pandemic,” while warning that the COVID-19 pandemic is not yet over.

Speaking on the eve of Thanksgiving at a news briefing in Geneva, Tedros said the WHO was concerned that individuals from multiple countries across the globe who have received COVID-19 shots are no longer taking precautions to protect both themselves and others against the virus.

The WHO chief also noted that at least 60 percent of all reported cases and deaths from COVID-19 globally were again coming from Europe last week.

“The sheer number of cases is translating to unsustainable pressure on health systems and exhausted health workers,” he said.

“In many countries and communities, we are concerned about a false sense of security that vaccines have ended the pandemic, and that people who are vaccinated do not need to take any other precautions … Vaccines save lives, but they do not fully prevent transmission,” he added.

Tedros also pointed toward data that suggests the efficiency of vaccines has declined over time and in the face of the Delta variant of COVID, explaining that the shots which initially reduced transmission by about 60 percent but have now dropped to 40 percent.

The WHO chief reiterated that while vaccines can lower the risk of severe reactions to COVID-19 and even death, that does not mean that a vaccinated individual is not at risk of being infected or infecting others with the virus.

“We cannot say this clearly enough: even if you are vaccinated, continue to take precautions to prevent becoming infected yourself and to infect someone else who could die,” Tedros said.

“That means wearing a mask, maintaining distance, avoiding crowds, and meeting others outside if you can, or in a well-ventilated space inside.”

The WHO chief said the organization continues to urge governments across the globe to implement a “tailored approach” when it comes to preventing transmission by way of public health measures such as social distancing and lockdowns.

Protests have erupted across several European countries and other Western nations over the past week as hundreds of thousands of people took to the streets to demonstrate against COVID-19 vaccine mandates. Governments in the EU, in particular, have started to ramp up related restrictions.

In Austria, tens of thousands of people protested in Vienna, Salzburg, and other cities after the Austrian government announced the implementation of a nationwide lockdown amid a surge in virus cases.

Austria’s lockdown began on Nov. 22, and will last for 10 days before government officials will reevaluate it. The country said it will make vaccines mandatory for everyone starting on Feb. 1, 2022.

Meanwhile, Germany is currently weighing up making COVID-19 vaccines mandatory for everyone, starting Feb. 1, 2022, because the government has failed to convince enough people to get the shots and is worried about hospital capacity.

“While, Europe is again the epicentre of the pandemic, no country or region is out of the woods,” Tedros said Wednesday. “It’s important for all countries to surge their capacities now to ensure the right measures are in place to avert the worst consequences of any future waves.”