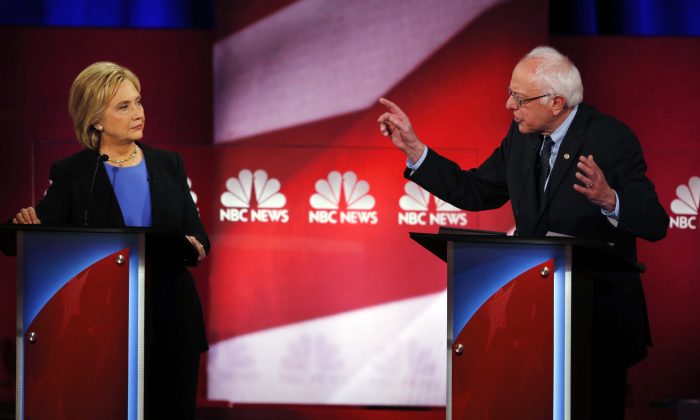 Sanders and Hillary Clinton faced off with just weeks to go until the primary voting starts, and 86 percent of the 111,783 votes in the poll said that Sanders won.

Time magazine, which conducted the poll, noted: “Online reader polls like this one are not statistically representative of eligible primary voters. They are a measure, however imprecise, of which candidates have the most energized online supporters, or most social media savvy fan base. After all, what they are counting is the number of Internet-devices controlled by people who want to vote.”

Another poll, from Slate, showed Sanders getting 86 percent of the votes in terms of winning the debate. It’s unclear how many people voted.

Other measures also indicated that Sanders won the debate, though. He was steadily the most searched candidate throughout the debate, with Clinton rarely getting more search interest than him.

Out of the 50 states, Sanders was the most searched in 38 of them.

The top trending questions for the candidates do show how uncertain voters are with just a little time to decide who to vote for.

Clinton’s top trending questions, apart from two dealing with her use of personal email while secretary of state, included: “Will Hillary Clinton win the nomination?”

Sanders gained the most followers during the debate, and of the most tweeted moments he was featured in many of them.

And he was also the most-discussed candidate on Facebook.