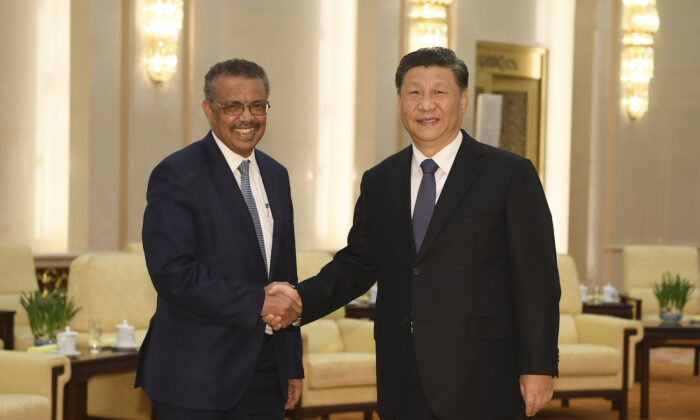 The World Health Organization (WHO) has refused to release the names of doctors who thwarted an early bid to declare the CCP virus a global health emergency at the start of the year, Sky News Australia reported.

A previous investigation by Sky found that a group of WHO doctors had debated over whether or not to declare the Chinese Communist Party (CCP) virus a global emergency in late January, but those medical professionals who wanted to implement strict travel restrictions were outvoted.

Instead, WHO Director-General Dr. Tedros Adhanom Ghebreyesus has continually praised China for its efforts to stop the spread of the virus. During a Jan. 28 meeting with President Xi Jinping, Tedros said the organization appreciated the “seriousness with which China is taking this outbreak, especially the commitment from top leadership, and the transparency they have demonstrated, including sharing data and genetic sequence of the virus,” before praising China’s “speed in identifying the virus.”

Instead of declaring a global emergency, the organization recommended that countries not ban travel to China or place any trade restrictions on the country. This was at a time when 12,167 cases of CCP virus had been confirmed and 170 deaths had been attributed to the disease.

Sky News said it asked the WHO to provide details of which doctors voted to block the emergency declaration from being declared in January but the organization declined to release those details, citing privacy concerns. WHO spokesman Tarik Jašarević told the outlet that it was “important to note that what happened between two meetings was the evidence of human-to-human transmission outside China.”

The WHO also maintained that the emergency declaration was blocked on Jan. 30 because it did not yet have evidence of human-to-human transmission, despite knowing that more than 12,000 people had been infected through human-to-human contact.

The Chinese communist regime has repeatedly faced accusations of lying about how many cases and deaths they have related to CCP virus and has reportedly detained those who tried to warn of danger, including doctors, thus allowing for the disease to spread throughout the world and create a global pandemic which has economically devastated nations.

In late March, Dr. Bruce Aylward, a Canadian epidemiologist who led a joint WHO-China mission looking into the spread of the virus in China, hung up on a reporter during a phone call in which he was questioned over whether the WHO would consider Taiwan’s membership, given their swift response to the outbreak.

Taiwan, just 80 miles away from China, was one of the earliest countries to be hit by the CCP virus but it also has one of the lowest infection rates, with 379 cases of the illness and 5 deaths as of April 8. The island is also barred from membership in the WHO under pressure from China, which views it as part of its territory—despite the fact that the self-ruled island has its own democratically-elected government, currency, and military.

The island has accused the WHO of ignoring its questions at the start of the outbreak, and said it was not given information about the virus, including whether there was human-to-human transmission. It also said it had tried to alert the WHO to the virus last year, which at that time was known only as a mysterious pneumonia, but was dismissed.

Aylward’s awkward response to questioning during the March phone call was largely seen as further evidence that the WHO is heavily influenced by China.

President Donald Trump in a Twitter post on Tuesday said that the WHO “really blew it,” and that the organization, despite being “funded largely by the United States,” was “very China-centric,” and said he will be investigating the matter further.

Trump later announced the United States plans to place a hold on funding for the WHO after branding them “too China-centric” and criticizing the organization for opposing his early decision to place a ban on travel from China aimed at preventing the spread of the CCP virus.

The WHO didn’t immediately respond to a request for a response to Trump.