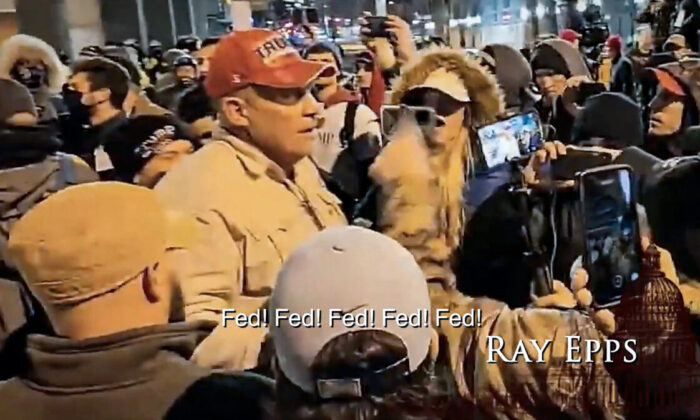 Ray Epps, who is accused of being a federal agent, is seen outside the Capitol in Washington on Jan. 5, 2021. (CapitolPunishmentTheMovie.com/Bark at the Hole Productions)
US

Controversy has surrounded Epps in recent months due to questions about his possible connection to law enforcement. Despite video evidence of him making repeated calls for action, Epps hasn’t been charged in relation to the Jan. 6 incident, and his photo has been removed from the government’s list of most-wanted people from the event.

The Democratic-led House committee investigating the breach reportedly stated on Jan. 11 that it has interviewed Epps, and that Epps denied any connection to law enforcement.

But at a Senate Judiciary Committee hearing earlier that day, Sens. Ted Cruz (R-Texas) and Tom Cotton (R-Ark.) were unsuccessful in obtaining answers about Epps.

Sanborn admitted that she is aware of Epps, but said she doesn’t have “specific background for him.”

When Cruz asked whether Epps worked with the FBI, Sanborn declined to answer—likewise for when Cruz asked about whether federal informants participated in the riots, encouraged the riots, or removed barriers.

“I cannot answer that,” Sanborn responded to each query.

“Similar to the other answers, I cannot answer that,” Sanborn replied.

Olsen said he wasn’t aware of any plainclothes officers among the Jan. 6 crowd, and that he didn’t know whether any undercover agents entered the Capitol.

“Your answers are all ‘I don’t know,’” Cotton said. “Did you prepare for this hearing? Did you know it was happening before this morning?”

Olsen also said he didn’t have any information about Epps.

“This was a man on the most-wanted page for six months. Do you really expect us to believe that you don’t know anything about him?” Cotton asked.

“I simply don’t have any information at all,” Olsen responded.

When pressed further, Olsen said he couldn’t say how many rioters were arrested for crimes related to violence, or name a single person from the government’s list of most-wanted Capitol Hill rioters. This provoked further criticism from the Arkansas senator.

“This is a hearing to mark the one-year anniversary of Jan. 6, and you can’t even tell us how many people have been charged with crimes of violence. Would you go into a briefing with the attorney general and not be able to answer such basic questions?” Cotton asked.

“I guess we’re going to have to seek our answers elsewhere. This was not a stellar performance.”

Toward the end of the hearing, committee chair Sen. Dick Durbin (D-Ill.) entered into the record a fact-checking article from PolitiFact, which says there’s no evidence that Epps was a federal asset.

Durbin said he never heard of Epps before Jan. 11.

Epps couldn’t be reached for comment. His address is listed on public court records—Jan. 6 defendant Kelly Meggs has issued a subpoena for him to testify—but a number connected to that address appears to have been disconnected. Epps also had a number listed on the page for the Arizona Oath Keepers, but a call to that line went straight to Epps’s voicemail, which was full.

In a January 2021 interview to The Arizona Republic, Epps reportedly said of his comments caught on video: “The only thing that meant is we would go in the doors like everyone else. It was totally, totally wrong the way they went in.”

Following the hearing, right-wing pundits took to Twitter to congratulate Cruz and Cotton for their questions. Cruz had been denounced by Fox News host Tucker Carlson a week earlier for referring to the Capitol Hill riots as “domestic terrorism.”

The Jan. 6 Committee issued the following statement shortly after the hearing: “Committee is aware of unsupported claims that Ray Epps was an FBI informant based on the fact that he was on the FBI Wanted list and then was removed from that list without being charged.

“The Select Committee has interviewed Mr. Epps. Mr. Epps informed us that he was not employed by, working with, or acting at the direction of any law enforcement agency.”