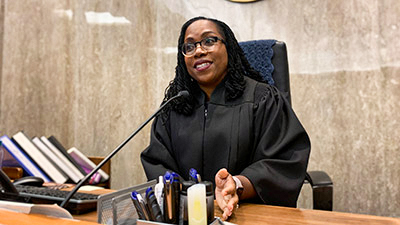 If she’s confirmed by the U.S. Senate and becomes the first black woman to serve on the Supreme Court—and if her judicial track record so far is any guide—Ketanji Brown Jackson will probably be a reliable member of the high court’s three-member liberal bloc.

Jackson’s arrival would maintain the current ideological alignment of the court, which is now made up of six conservatives–three of whom were appointed by then-President Donald Trump–and three liberals.

Born Ketanji Onyika Brown, Jackson turns 52 on Sept. 14. She would replace retiring Justice Stephen Breyer, who will be 84 on Aug. 15. Jackson previously clerked at the Supreme Court for Breyer, who has sung her praises.

She’s related by marriage to former Speaker of the House Paul Ryan (R-Wis.), who ran for vice president in 2012 opposing the incumbent vice president at the time, current President Joe Biden. After hearing of the nomination, Ryan said wrote on Twitter that “our politics may differ, but my praise for Ketanji’s intellect, for her character, and for her integrity, is unequivocal.”

Born in Washington, Jackson moved with her family to Florida when she was young. Her father was chief attorney for the Miami-Dade County School Board; her mother was principal at a public magnet school. She attended the same high school as Amazon founder Jeff Bezos and U.S. Surgeon General Vivek Murthy, where she was student body president and excelled in debate.

She graduated from Harvard College and Harvard Law School. She was a reporter and researcher at Time magazine, worked at four elite law firms, and served in three federal judicial clerkships, as well as an attorney and commissioner on the U.S. Sentencing Commission as it moved to reduce sentences for drug crimes. In an experience that’s not typical for Supreme Court justices, Jackson worked for two years as a public defender, Amy Howe at SCOTUSblog reported.

When The Washington Post reviewed cases that Jackson had handled as a federal defender, it reported that “she won uncommon victories against the government that shortened or erased lengthy prison terms.”

Her experience as a public defender is a selling point for Democrats.

“Before Biden became president, only about 1 percent of federal appellate judges had previously done the kind of work Jackson has done,” Joel Mathis at The Week reported.

Jackson was one of the attorneys on a 2001 friend-of-the-court brief arguing in favor of a Massachusetts law that formed a floating “buffer zone” around pedestrians and automobiles nearing abortion clinics. A federal appeals court allowed the law to stand.

Jackson is currently a judge on the influential U.S. Court of Appeals for the District of Columbia Circuit, which has served as a kind of farm team for the high court. Eight other judges from the D.C. Circuit have gone on to the Supreme Court, among them the late Antonin Scalia and Ruth Bader Ginsburg. The current Supreme Court justices to come from that court are Clarence Thomas, John Roberts, and Brett Kavanaugh, according to Ballotpedia.

Before that, Jackson was nominated by then-President Barack Obama to be a judge of the U.S. District Court for the District of Columbia. She was confirmed by senators on a voice vote, and served in that post from March 2013 until June 2021.

While serving as a district court judge, Jackson found that parts of three of then-President Donald Trump’s executive orders were in conflict with federal employees’ rights to collective bargaining. Her decision was unanimously reversed by the D.C. Circuit.

In 2019, Jackson rejected Trump White House arguments that executive privilege shielded White House Counsel Don McGahn from a congressional subpoena in connection with special counsel Robert Mueller’s investigation of alleged Russian interference in the 2016 election. Jackson wrote in a court opinion that “Presidents are not kings” and that for a president’s senior aides, “absolute immunity from compelled congressional process simply does not exist.”

Trump’s assertion that he could prevent top advisers from testifying “is a proposition that cannot be squared with core constitutional values, and for this reason alone, it cannot be sustained,” she added.

Later, congressional investigators and McGahn’s attorneys cut a deal, and he agreed to be questioned in a closed-door session, according to a media outlet’s analysis.

In the same court in 2019, Jackson temporarily prevented the Trump administration from moving forward with plans to enlarge a program that expedited the deportation of illegal aliens. Previously, the program had primarily been used to speed up removals of those who were detained shortly after illegally entering the country from Mexico. It bothered Jackson that the government seemed to not factor in how the expanded program would affect illegal immigrants and their families who had been residing in the country for as long as two years.

“There is no question in this Court’s mind that an agency cannot possibly conduct reasoned, non-arbitrary decision making concerning policies that might impact real people and not take such real-life circumstances into account,” Jackson wrote.

The D.C. appeals court that she would later be elevated to overturned her decision, finding that the Homeland Security secretary had the authority to ramp up the program.

Soon after arriving on the U.S. Court of Appeals for the District of Columbia Circuit, Jackson ruled in favor of government employee unions who were fighting a Trump-era regulation that gave government agencies the authority to make changes in the workplace.

It’s unclear when the Senate will take up Jackson’s nomination.

Breyer, who was appointed by then-President Bill Clinton in 1994, has said that he’ll retire at the end of the court’s current term, which is expected to end in May or June.