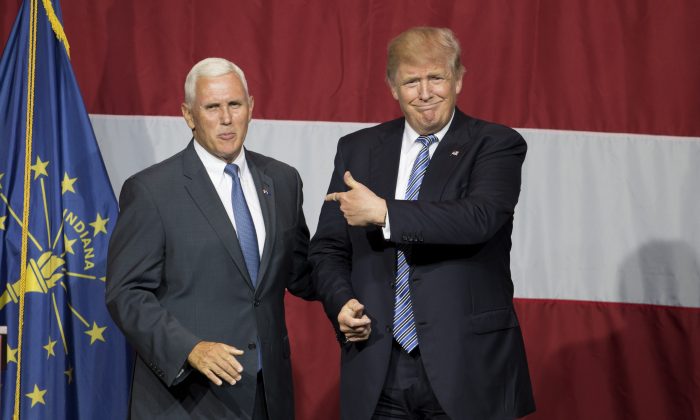 Tapped by Trump as his running mate.
By Steven Klett

Donald Trump announced on Friday, July 15, that Indiana Governor Mike Pence is his choice for Vice President, via his Twitter account, and that an official announcement would be made the following day at a press conference.

I am pleased to announce that I have chosen Governor Mike Pence as my Vice Presidential running mate. News conference tomorrow at 11:00 A.M.

Trump had originally planned to announce his choice on Friday at a press conference, but cancelled those plans in the wake of the terrorist attack in Nice, France.

Pence, 57, endorsed Rep. Ted Cruz (R-Tx.) during the primary season, but spoke highly of Trump, and spent time on Tuesday campaigning with the presumptive Republican nominee, which many viewed as a trial run for the VP slot.

The Indiana Governor is known as a staunch social conservative with ties to the conservative Christian community and Tea Party movement. He has served six terms in Congress before becoming the Governor, and is strongly opposed to Planned Parenthood and same-sex marriage.

Pence is currently running for re-election against Democrat John Gregg, and recent polls have shown a tight race. Indiana law prevents him from seeking two offices at once and he will now have to withdraw from the governor’s race.

As governor, supporters cheered his focus on tax cuts, but critics have pointed to his predecessor, Governor Mitch Daniels (R) as the architect of the fiscal growth in the state, whose coattails they say Pence rode on, according to a report by The Hill.

Connected to that is the critical response that Pence is not conservative enough, and has capitulated on too many socially conservative issues in the state.

Writer at Conservative website The Federalist, Joy Pullmann outlined a laundry list of complaints against the Governor of the Hoosier state, including a “watered-down” version of the education reform program Common Core and expanding of Obamacare.

However, supporters of the decision point to the many things that he brings to the ticket. Having Pence on the ticket bolsters the campaign’s standing and should garner loyalty among the GOP elites in Washington D.C. who are hesitant to support a Trump presidency.

Speaker of the House Paul Ryan (R-Wis.), who has endorsed but also frequently criticized Trump, has praised Pence recently, saying that he would make a good pick as Vice President.

Ryan told reporters Thursday: “I hope that he picks a good movement conservative. Clearly Mike is one of those.”

Trump’s signal for Pence has already impressed some of the Anti-Trump congressmen like Senator Jeff Flake (R-Ariz.) who have been vehement critics of Donald Trump.

In a report by Politico, Flake said in reaction to earlier reports that it would be the “best choice Donald Trump’s made so far.”

Another positive aspect to having Pence on the ticket are his fundraising connections. He has connections to the fundraising groups associated with the Koch brothers.

Trump, who has yet to gain the graces of the right wing fundraising and donor organizations, could benefit from the extra support.

Pence has a more laid-back approach to politics, in stark contrast to Trump. He also has years of experience as a talk radio host, and his communication abilities could help with shaping the campaign’s message.