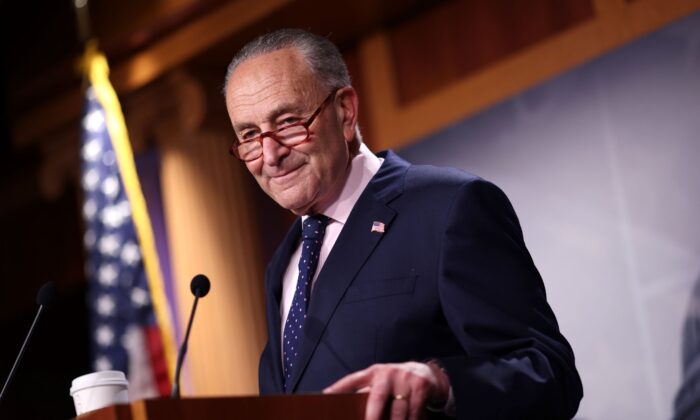 Senate Majority Leader Charles Schumer (D-NY) speaks on the passage of the bipartisan infrastructure bill, during a news conference at the U.S. Capitol on Aug. 11, 2021. (Kevin Dietsch/Getty Images)
Vaccines & Safety

Senate Majority Leader Chuck Schumer (D-N.Y.) said Sunday that the federal government needs to clamp down on the proliferation of fake COVID-19 vaccination cards in the midst of restrictions and rhetoric around so-called vaccine passports.

Schumer is calling for “all-out enforcement” by the federal government.

Schumer said that the practice is illegal while saying that there needs to be a federal education campaign showing that it’s against the law to sell or buy a fake card.

“Too many people are looking to buy them,” he said.

Schumer is demanding U.S. Customs and Border Protection and the FBI team up with officials from the Department of Health and Human Services to launch a clampdown on the counterfeit cards and start a campaign to make clear that forging the cards could land people in federal prison.

He also wants the Justice Department to immediately prioritize cases involving fake vaccine cards and is pushing for Customs and Border Protection to work harder to find counterfeit cards being sent from overseas.

The FBI in March issued a joint statement with the Department of Health and Human Services, urging people not to buy, create, or sell fabricated vaccine cards. The unauthorized use of the seal of an official government agency is a federal crime that carries a possible fine and up to five years in prison.

White House coronavirus response coordinator Jeff Zients said during a COVID-19 White House virtual briefing that the federal government is indeed “aware of some cases of fraud or counterfeit COVID-19 cards being advertised on social media sites and e-commerce platforms,” but stated that the practice “is not widespread.”

Schumer’s announcement comes as New York City, San Francisco, and Los Angeles are moving to implement a vaccine passport system for certain businesses. New York’s passport system is slated to go into effect in mid-September, although a number of New Yorkers aren’t vaccinated.

Vaccine passport systems have been flagged by civil liberties groups as being an infringement on individuals’ right to privacy and freedom of movement. A number of Republican-led states have approved legislation or orders banning their usage.

According to an analysis by The Epoch Times, about 67 percent of black New York residents between the ages of 18 and 44 could be denied service at the city’s restaurants, bars, and theaters due to the vaccine mandate. Only about 33 percent of that demographic has received at least one dose of the vaccine, while 28 percent have received both doses.