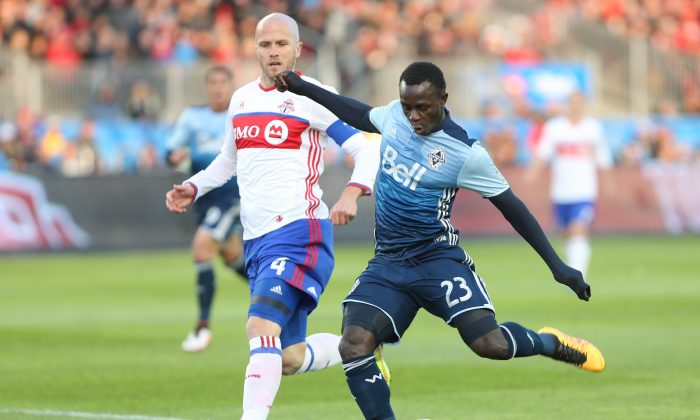 Vancouver shows depth, character needed to be a force in MLS Western Conference
By Rahul Vaidyanath

TORONTO—The Vancouver Whitecaps’ season has been a rollercoaster, but it is now peaking. The Caps have won three games in eight days—the last one, a 4–3 barnburner at BMO Field against Toronto FC on Saturday. Vancouver proved it possesses a deep squad with character and the weapons to upset the league’s best defenses.

Given the parity in MLS, one win—let alone three—can make a difference in the standings. Last year, Vancouver finished second in the West, just two points ahead of sixth-place Kansas City. Vancouver moved from fifth to third with the win over TFC.

It’s a far cry from where the Caps were earlier this year. Vancouver went 374 minutes without scoring, seven games without a goal from open play, and through a six-game stretch with one win.

“The league is very funny, you can go through three, four, or five games without getting a result and everyone says you’re in a crisis,” Robinson said. “Or you can win three games in a week and people are predicting you to go and win MLS. That’s how crazy it is and way off it is.”

The Whitecaps were big underdogs with key players missing, in the midst of a busy schedule, and on the road. Their win demonstrated that what’s on paper does not translate to what takes place on the pitch.

Robinson praised his team’s character. “Everything was against us, we know that. We weren’t going to use that as an excuse,” he said.

Given Vancouver’s scoring troubles—injured strikers Octavio Rivero, with one goal in 10 appearances and Masato Kudo (broken jaw), and veteran striker Blas Pérez starting on the bench—it was time for 21-year-old Kekuta Manneh to step up.

The Gambian winger doubled his season’s goal total and made the league’s second-best defense look like last year’s—worst in the league. His electrifying speed and excellent technique were the difference.

Manneh had been struggling in 2016 with one goal in 11 appearances prior to facing TFC. With a precocious young talent like Manneh, Robinson felt the player needs his freedom on the pitch.

Everything was against us, we know that. We weren’t going to use that as an excuse.

“Go and enjoy yourself,” was Robinson’s instruction to Manneh pre-game.

“When he enjoys himself and plays like he does, he’s able to do things, unlock defenses and I think people forget he’s still only 21 years of age,” Robinson said. “He’s got a long way to go, he’s got huge talent.”

Another big reason for Vancouver’s success is Danish goalkeeper David Ousted, who finished as runner-up for Goalkeeper of the Year last year.

“I never like giving up three goals,” Ousted, who made seven saves, said. But he put it in perspective. “When we go to TFC, a tough place to play and win 4–3, it’s not the time to be pessimistic.”

Road teams find very little success in MLS with coast-to-coast journeys not helping. But last year, Vancouver had the league’s only .500 record on the road.

Ousted also liked how Robinson used Manneh as an attacking winger on the left flank.

“Carl [Robinson] put him in a role that was best for him,” Ousted said. Manneh is at his best when he can run at defenders, terrorizing them with his blistering speed.

As improved as TFC’s backline is, it lacks pace; its average age is 30. Ousted said Robinson “noticed some chinks in the TFC armor.”

Defense has been Vancouver’s calling card and Robinson felt his team did well in slowing Sebastian Giovinco. Their best defender, Kendall Waston, who finished second in voting for MLS Defender of the Year in 2015, was suspended for the match.

“We know he’s the best player in the league and every goal has come through him,” Robinson said about Giovinco. “We try to limit his space and chances and we did it to an extent, but he still got two goals.”

Toronto FC coach Greg Vanney was understandably upset with his team’s performance. He knew how Vancouver had to approach the match.

“We knew counterattack was going to be the name of the game for them,” Vanney said. And given the TFC knew what was coming, their response was even more disappointing.

“Pathetic,” Vanney called it. “We didn’t start the game with the right mentality. Period.”

“Sometimes you gotta get punched in the face to realize we’re not as good as we believed we were,” said TFC defender Drew Moor.

The Whitecaps are a young, inexpensively assembled squad. The highest paid player in 2015 was Pedro Morales at US$1.4 million. By comparison, Toronto FC’s three designated players earn on average US$6.1 million.

Soccer Picks up Hockey’s Slack in March for Canada

The MLS season is long and teams have their ups and downs. But to come up with a result in Toronto against all odds justifies the Whitecaps as a threat in the Western Conference. The squad showed it has the capability to win on any given night.