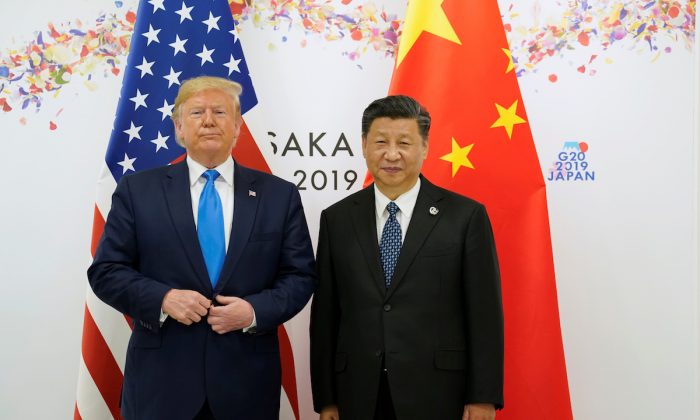 WASHINGTON—White House trade adviser Peter Navarro said on July 2 that U.S. trade talks with China are heading in the right direction and any concessions to Beijing on Huawei were small in the context of a larger trade deal.

“We’re headed in a very good direction,” Navarro said in an interview with CNBC. “It’s complicated, as the president said, correctly, this will take time and we want to get it right. So let’s get it right.”

Trump and Chinese leader Xi Jinping agreed in a meeting on Saturday at the Group of 20 summit in Japan to restart trade talks after the last major round of negotiations collapsed in May.

The partial lifting of restrictions on Huawei was a key element of the agreement, which allows expanded sales of U.S. technology supplies to the Chinese telecommunications giant. Washington put Huawei on an export blacklist in May, citing national security concerns over its 5G network technology.

Navarro played down the concession on Huawei, saying U.S. policy with respect to the 5G component has not changed.

“All we’ve done basically is to allow the sale of chips to Huawei, and these are lower-tech items which do not impact national security whatever,” Navarro said. “Selling chips to Huawei, a small amount of chips—less than $1 billion a year—in the short run is small in the scheme of things.

Huawei’s founder and chief executive, Ren Zhengfei, told the Financial Times the company was willing to continue buying products from U.S. firms, but the relaxation of the ban would not have “much impact” on Huawei’s business as it adjusts to a new era of American hostility.

Navarro said Washington would continue working closely with allies to ensure they did not adopt Huawei 5G technology, but had agreed to allow the sale of some low-level chips to bring China back to the negotiating table and secure an agreement by Beijing to buy significant amounts of agricultural products.

“We’re not going to sacrifice anything in order to get a cheap political trick,” he said. “The whole China game plan … is to dominate not just 5G but artificial intelligence, blockchain technology, and we can’t let that happen.”

Warren Maruyama, former general counsel for the U.S. Trade Representative’s Office and a partner with the Hogan Lovells law firm, said it remained unclear if the two sides could strike a deal after China abruptly backed away from a carefully negotiated draft agreement in May.

“It’s still completely up in the air. If anything, it’s going to take several months. What the blow-up in May showed is that there are some pretty fundamental differences they would have to resolve to get to a deal,” he said.

William Reinsch, a senior adviser at Kelley, Drye & Warren and a former under secretary of commerce for export administration, said the Trump administration could amend the temporary general license granted shortly after Huawei was put on the blacklist to include more technologies that U.S. companies could sell without obtaining approval.

Some chips needed to build 5G telecoms equipment, such as field programmable gate arrays and various radio frequency chips and multiplexers, have uses outside of the 5G sector.

Companies could also apply for individual licenses, he told Reuters, noting that the departments of Commerce, Defense, State and Energy would work together to define what technologies might be acceptable for resumed exports to Huawei.