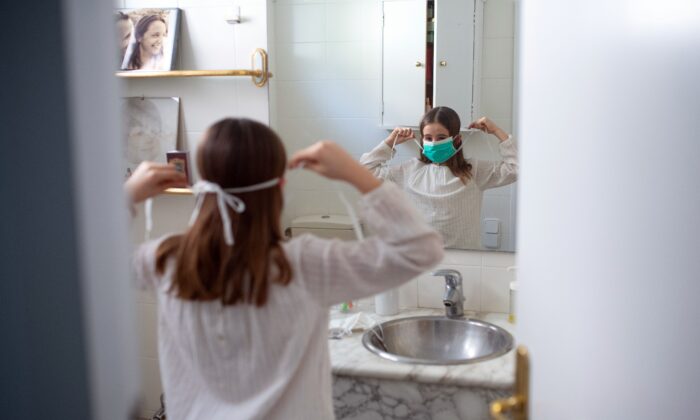 We should all be saying that in unison in response to the White House threat to veto the resolution approved by the Senate on March 15 to repeal mask mandates on all public transportation, including airplanes.

In fact, we should have been saying that months or even years ago now.

The masked mouth has literally become a symbol of authoritarianism, of a slavish obedience to power associated with the most totalitarian states.

Masks have literally become an American form of Mao suits.

Our children have been forced to wear them, even though it has now been thoroughly documented that their intellectual and emotional development has been stunted for years by having their facial expressions hidden from each other and from their teachers.

This generational child abuse will have horrendous ramifications for our society far into the future.

All this for a form of protection that no one has been able to show really works. Yet many people are so habituated that they’ll continue wearing them for decades to come as a kind of political fashion statement.

We see them every day, when they drive by us all alone in their cars, still sporting masks, or pass us on hiking trails far from other human beings with masks plastered across nose and mouth.

These same people are the reliable foot soldiers of a nascent fascist state that’s already partly here under the bogus guise of protecting our health.

Watching Volodymyr Zelensky’s speech to the Canadian Parliament the other night was a shocking display of how far this has come and of where Western culture is now.

Zelensky appeared onscreen from his benighted home country, looking informal, maskless in a T-shirt. Then the camera cut to his Ottawa audience of parliamentarians, who were all sitting there in rows, every single one masked like zombified clones in some dystopian science fiction movie—only it was reality. To say it was chilling is an understatement.

Soon enough—a week, maybe a month—the dreadful Ukrainian war will finally be over, and we’ll be back to normal. But what is that? What is normal?

In the midst of the fog of war, the Rasputin of our time, Dr. Anthony Fauci, who had mercifully disappeared for a bit, suddenly surfaced to remind us that we aren’t done with COVID-19 vaccine booster shots. In fact, we may never be over them.

Get used to it. The gas pump may be empty, but the hypodermic needle is always there ready to fill you up.

For Fauci, masks, too, will always be a necessary part of our lives. Don’t forget to wear one wherever you go. And don’t laugh at those people in cars. They’re just being prepared. They’re good citizens.

This is the kind of “control freak” thinking and behavior that must be resisted with civil disobedience at every turn.

As I write this, British Airways and Virgin Atlantic have announced that they’re removing mask mandates from their flights. We can fly to London comfortably, but not to Chicago.

That we needed masks on planes was one of the biggest lies of all. A Department of Defense study released in October 2020 showed that planes, because of HEPA-refiltered air circulation, were safer from COVID-19 than operating rooms.

Nevertheless, we all cooperated with stewardesses and wore our masks, reluctantly pulling them over our noses when reminded. We had to if we wanted to travel.

I was among them on a few occasions, I regret to say. No more. Hell no, I won’t go, until our U.S. airlines follow the lead of the British.

Actually, we should all wait until Biden “tears off that mask.”