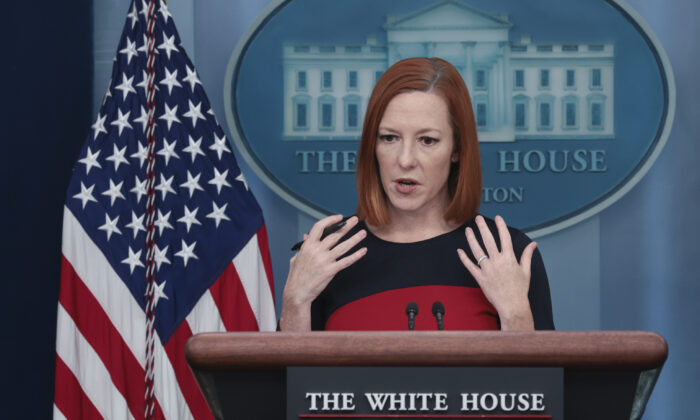 Psaki made the remarks during Tuesday’s White House press briefing while responding to a question by a reporter on Spotify’s decision to add disclaimers. She said the company taking action is “a positive step,” but the Biden administration wants “every platform to continue doing more” in calling out “COVID-19 misinformation.”

“Our hope is that all major tech platforms, and all major news sources for that matter, be responsible and be vigilant to ensure the American people have access to accurate information on something as significant as COVID-19. That certainly includes Spotify,” Psaki said.

Rogan recently faced criticism from several people who went as far as demanding Spotify to remove episodes of “The Joe Rogan Experience” podcast from the platform after claiming the 54-year-old host promoted “misinformation” about the CCP virus and vaccines.

On Monday, Rogan said in a nearly ten-minute video on his personal Instagram account that he wasn’t trying to “promote misinformation” or “be controversial”—noting that he was simply seeking to have conversations on his podcast with people who have “differing opinions.”

“I’ve never tried to do anything with this podcast other than to just talk to people and have interesting conversations,” Rogan said.

Psaki’s comment has also drawn the attention of cardiologist Dr. Peter McCullough, who appeared in a popular episode of the show in recent weeks.

“Instead of going after Rogan who is not a doctor—why not POTUS, Psaki, and Spotify invite me for a review of the data so they can fully see and understand all the peer-reviewed ad preprint data they are trying to censor? How can they know what to censor if they don’t review it?” McCullough said on Twitter.

He also disputed claims that he promoted “misinformation” about COVID-19 and vaccines during the show after Spotify chief executive Daniel Ek announced the tech giant will lay out more transparent platform rules such as content advisory warnings.

McCullough has an impressive list of credentials—he’s an internist, cardiologist, epidemiologist, and a full professor of medicine at Texas A&M College of Medicine in Dallas and is the editor of two medical journals and published hundreds of studies in the literature. He’s also among those persons speaking out about the potential harm COVID-19 jabs can cause, even putting his medical license and future livelihood at risk by so doing.

U.S. virologist and immunologist Dr. Robert Malone, who is a key mRNA vaccine technology contributor also recently appeared on the show. Both medical professionals have been critical of the way in which the pandemic has been handled in the United States.

Johnson has joined a number of famous Americans, including Democratic presidential candidate Marianne Williamson, who have voiced their support for the podcaster.

“I’m triple vaxxed, but (unless they’re standing for hate or calling for violence) banning someone’s podcast is too much like burning a book to me,” Williamson said on Twitter. “Joe Rogan should talk on his podcast about whatever he damn well pleases.”