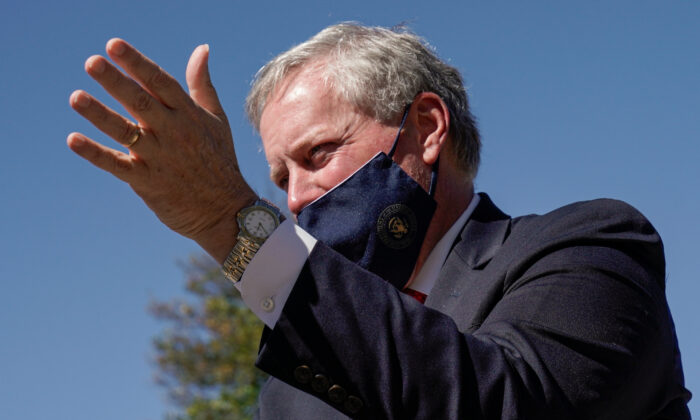 The Trump administration has increased its COVID-19 stimulus offer in an attempt to make a deal with House Democrats before the election, White House chief of staff Mark Meadows said.

He reiterated on Fox News that the White House remains “committed to negotiating and also committed to making sure that we get a deal as quickly as possible.”

The new offer came after House Speaker Nancy Pelosi’s office (D-Calif.) said on Oct. 17 that she would set a 48-hour deadline to come to an agreement on the negotiations, although it isn’t clear what would happen if no accord is reached.

Pelosi’s office said in a statement she’s “optimistic that we can reach [an] agreement before the election,” adding that “to that end, we are writing language as we negotiate the priorities, so that we are fully prepared to move forward once we reach agreement.”

“The White House has removed 55 percent of the HEROES Act’s language for testing, tracing, and treatment,” Pelosi said in the statement.

President Donald Trump said he’s ready to match the $2.2 trillion offer from Democrats, or possibly go even higher. But Senate Republicans, including Majority Leader Mitch McConnell (R-Ky.) have balked at the prospect and said they would attempt to vote on several smaller stimulus packages this week.

McConnell’s last attempt to pass a smaller stimulus package in the Senate was blocked in September.

Over the weekend, Trump told a local news station that he would be able to overcome Republican objections in the Senate if the White House and Pelosi come to an agreement.

“If I had something that would be good, I think I could quickly convince the Republicans to do it,” the president said. Trump added that if any Republican senators oppose the stimulus package, he “will take care of that problem in two minutes.”

“The President, Secretary Mnuchin, and myself have not only made modifications but made substantial modifications that come at the risk of jeopardizing Republican support,” Meadows told reporters on Oct. 19. “The [Treasury] Secretary and I have had a number of very fruitful discussions over the last several days that give us a hope that we might be able to reach some kind of an agreement in the next 48 hours.”