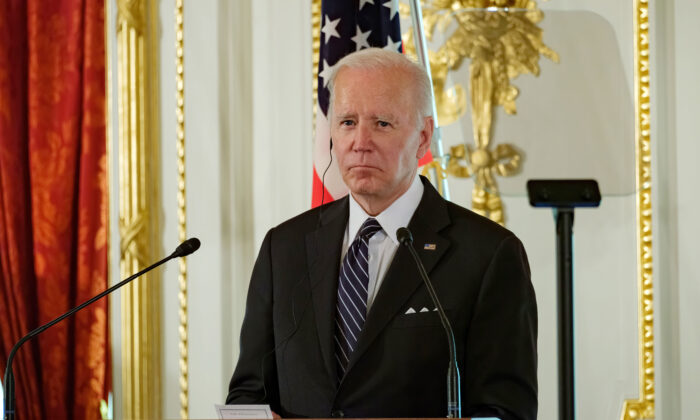 White House officials scrambled to roll back comments made by President Joe Biden on May 23, when he said the United States would defend Taiwan militarily in the event of an invasion by China.

White House staff said that Biden was only reiterating the United States’ policy that it would provide military equipment to Taiwan, not advocating sending troops to defend it.

When Biden, who is currently in Asia promoting his Indo-Pacific Economic Framework, was asked by a reporter whether the United States would militarily defend Taiwan from invasion, he answered simply, “Yes.”

“It’s the commitment we made,” Biden added. “Look, here’s the situation. We agree with a ‘One China Policy’, we signed onto it, and all the attendant agreements made from there. But the idea that [Taiwan] can be taken by force … it’s just not appropriate.

“It will dislocate the entire region, and be another action similar to what happened in Ukraine. And so it’s a burden that is even stronger.”

The “One China Policy” refers to the United States’ recognition of the Chinese Communist Party’s (CCP) claim that there is only one Chinese government. That’s separate from the CCP’s “One China Principle,” which maintains that the communist regime has historic rights to the whole territory of pre-civil war China, including Taiwan.

The CCP claims that Taiwan is a breakaway province that must be united with the mainland, although Taiwan has been self-governed since 1949 and has never been under CCP control.

Biden’s comments appeared to break with the United States’ longstanding policy of so-called strategic ambiguity, in which it will neither confirm nor deny whether it would come to Taiwan’s aid in the event of a war.

Moreover, the statement is the third time since August 2021 that White House officials have refuted the president’s comments regarding Taiwan and claimed that there was no change in policy. The last such incident was in October 2021, when Biden broke with strategic ambiguity and said the United States had a “commitment” to defend Taiwan.

While Taiwan doesn’t have a mutual defense agreement with the United States, the 1979 Taiwan Relations Act does guarantee that the United States will furnish Taiwan with the capabilities necessary to maintain its own defense.

Numerous experts and former lawmakers went online to criticize the decision to roll back the president’s comments and called for a more assertive U.S. stance on the issue.

“This is the third time @potus has spoken out in favor of strategic clarity on Taiwan and third time WH staff has tried to walk it back,” Council on Foreign Relations President Richard Haass wrote in a tweet. “Better to embrace it as new US stance, one that is fully consistent with one-China policy but that alters how US will go about implementing it.”

“Instead of trying to walk back Biden’s comments, the administration should be explaining to the American public why our ‘Strategic Ambiguity’ on Taiwan needs to become more clear and direct,” former U.S. Rep. Will Hurd wrote in another. “We will defend our allies. Full stop.”