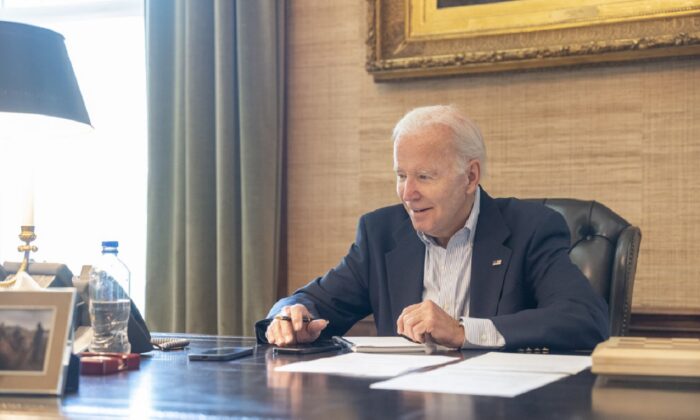 President Joe Biden works at the White House in Washington on July 21, 2022. (White House via The Epoch Times)
By Zachary Stieber

It doesn’t matter where President Joe Biden contracted COVID-19, according to the White House.

“I don’t think that matters. Right? I think what matters is we prepared for this moment,” White House press secretary Karine Jean-Pierre told reporters on July 21, shortly after it was announced Biden tested positive for the illness.

Biden had a “restless sleep” and a dry cough, along with a runny nose and fatigue, which triggered the testing, Jean-Pierre said.

“I don’t know the exact, like, hour that he developed—that he became aware of his symptoms,” Dr. Ashish Jha, coordinator of the White House COVID-19 response, told reporters.

Biden spent time with others before testing positive. On Wednesday, for example, he was accompanied by multiple members of Congress and White House staff like Jean-Pierre on Air Force One while traveling to Massachusetts. He met with Olena Zelenska, Ukraine’s first lady, this week.

“We’re starting the process” of figuring out who was in close contact with Biden and communicating with them, Jean-Pierre said.

Some of those in contact with the president took tests, which came back negative, spokespeople said. They included Sen. Ed Markey (D-Mass.) and Rep Jake Auchincloss (D-Mass.).

Isolating From Others, Including Wife

“I’m on the road in Detroit today, but I spoke to Joe earlier and he’s feeling fine, just experiencing a few mild symptoms,” the first lady wrote on Twitter.

She reportedly planned on staying at the family’s home in Wilmington, Delaware while her husband isolated for five days at the White House, in accordance with recommendations from the Centers for Disease Control and Prevention.

The guidance advises people who tested positive to remain apart from others and, if they cannot, to wear a mask at all times.

Biden was not wearing a mask in a picture disseminated by the White House later Thursday. He appeared to be within six feet of, or in close contact with, another person.

COVID-19 is primarily a disease that resolves on its own, but can cause hospitalization and even death in a small number of cases. Because of Biden’s advanced age, 79, he is considered at high-risk of progression to severe disease. Biden was taking Paxlovid, Pfizer’s COVID-19 pill, on the advice of his doctor.