White House Responds After Biden Asks Where Deceased Congresswoman Is 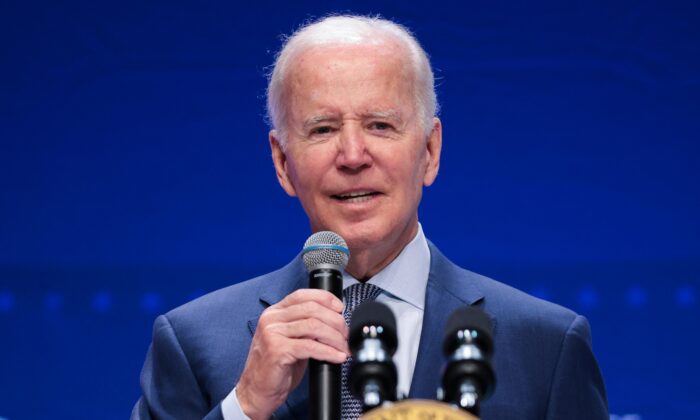 President Joe Biden speaks during the White House Conference on Hunger, Nutrition, and Health at the Ronald Reagan Building in Washington on Sept. 28, 2022. (Oliver Contreras/AFP via Getty Images)
By Zachary Stieber

The White House on Sept. 28 claimed that President Joe Biden was not acting unusual when he looked around during an event and asked about a deceased congresswoman.

Biden, a Democrat, was thanking members of Congress who supported legislation aimed at tackling hunger issues when he looked around for the late Rep. Jackie Walorski (R-Ind.).

Walorski died in a car crash earlier this year. After the sudden death, Biden issued his condolences.

Jean-Pierre noted that Walorski’s family is expected to travel to Washington to watch as Biden signs a bill on Friday to rename a Department of Veterans Affairs clinic in Indiana in honor of her.

“That is what he was thinking of,” Jean-Pierre said.

Multiple reporters pressed Jean-Pierre, noting that he looked around for her and seemed to think she was still alive.

“The confusing part is why … does the president think that she’s living and in the room,” one reporter wondered.

“Her being on top of mind, I don’t think that’s unusual. I feel like many of us have gone through that particular time where someone is on top of mind and you call them out and you mention them, especially in this type of context,” Jean-Pierre said.

“I don’t find that confusing. I mean, I think many people can speak to when you have someone in top of mind, they’re top of mind, exactly that. And it is also, if you put it into the context, it’s not like it happened outside of context, right? It happened at an event when we were calling out the champions, the congressional champions in particular, for this issue” of food security, she added.

“I have John Lennon top of mind just about every day, but I’m not looking around for him,” one reporter quipped.

“When you sign a bill for John Lennon as president, then we can have this conversation,” Jean-Pierre replied.

Republicans said Biden should issue an apology to Walorski’s family.

“Truly an awful and disgraceful blunder. Jackie was a selfless leader and a dear friend. Her family deserves better than this. Biden and the entire White House staff should apologize,” Rep. Vicky Hartzler (R-Mo.) said in a statement.

Correction: A previous version of this article inaccurately described the facility that will be renamed for Rep. Walorski. It is a Veterans Affairs clinic. The Epoch Times regrets the error.