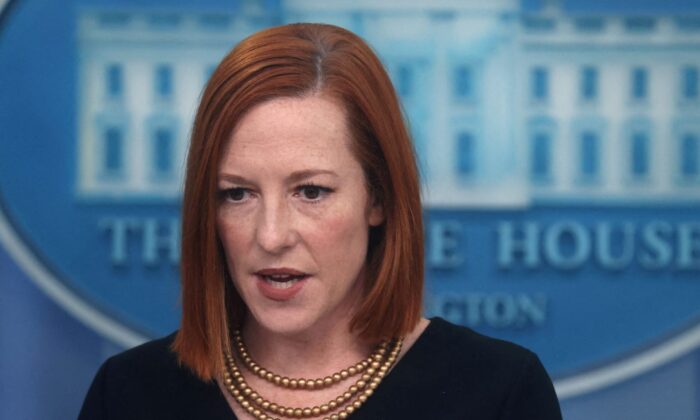 At the White House press briefing on Wednesday, press secretary Jen Psaki refused to answer speculative questions about the future of the Supreme Court but did say that President Joe Biden remains committed to his campaign promise to appoint the first ever black woman to the high court in the event of a vacancy.

This after Senate Majority Leader Chuck Schumer (D-N.Y.) issued a statement Jan. 26 saying that Supreme Court Justice Stephen Breyer will retire at the end of the court’s term this summer. Several Democratic congressional members then followed with calls on Biden to nominate a black woman.

“The president has stated and reiterated his commitment to nominating a black woman to the Supreme Court and certainly stands by that,” Psaki said. “For today, again, I’m just not going to be able to say anything about any specifics until, of course, Justice Breyer makes any announcement, should he decide to make an announcement.”

At a campaign event last summer, Biden said that he is “putting together a list of African-American women who are qualified and have the experience to be on the court,” and added that he’s “not going to release that until we go further down the line in vetting them as well.”

Breyer, 83, has served as a Supreme Court justice for more than 30 years. He was appointed by former President Bill Clinton, a Democrat, and is considered to be part of the high court’s liberal-leaning wing. Were he to step down, it would pave the way for Biden to appoint his first Supreme Court justice.

Some have speculated that Vice President Kamala Harris—who previously served as attorney general for the state of California—could be a potential choice for a vacant seat. Psaki on Wednesday repeated her previous statement saying that Biden intends to run again in 2024 with Harris on the ticket.

Jared Carter, an assistant professor at Vermont Law School, told The Epoch Times on Wednesday that he expects Republicans to fight a Biden nomination as aggressively as Democrat’s did the Trump nominations. But he noted that the Democrats hold a slim majority in the Senate and that Democratic Sens. Joe Manchin (D-W.Va.) and Kyrsten Sinema (D-Ariz.) have both voted independent of Biden’s agenda in the past.

“My sense is certainly that Biden recognizes that he’s going to have to appease every Democrat, and that includes Sens. Sinema and Manchin, and so I think that means we’re going to see, certainly, not a ‘far-left’ nominee,” Carter said. “We’re much more likely to see a centrist jurist—someone who doesn’t have a reputation one way or the other.”

Sen. John Cornyn (R-TX), who sits on the Senate Judiciary Committee, said of the pending retirement, “There will be immense pressure from the radical left to replace Justice Breyer with a partisan who will legislate from the bench, and I hope President Biden will not cave to their demands the way he has on nearly everything else the past year.”

Schumer said Biden’s nominee “will receive a prompt hearing in the Senate Judiciary Committee and will be considered and confirmed by the full United States Senate with all deliberate speed.”

If Breyer does decide to retire at the end of the Supreme Court term this summer, he will likely vote on Dobbs v. Jackson Women’s Health Organization—a case that examines the constitutionality of a law from Mississippi that would ban abortions after 15 weeks of pregnancy, with no exceptions for rape or incest—before he vacates his seat.