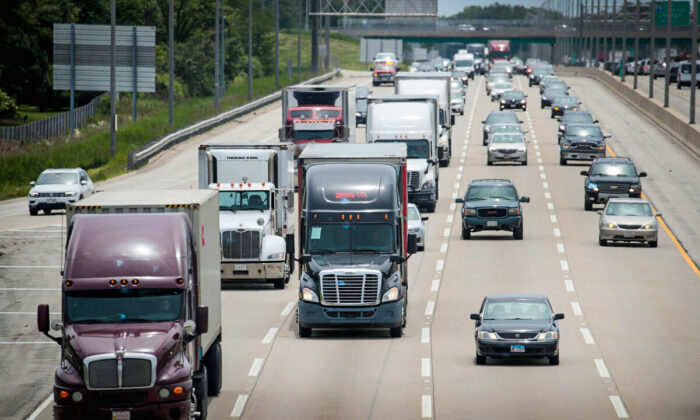 LAKE FOREST, ILLINOIS - JUNE 21: Semi trucks travel along I94 on June 21, 2019 near Lake forest, Illinois. The trucking industry in 2019 has experienced a drop in demand from 2018 and freight rates have fallen year over year for six months straight. (Photo by Scott Olson/Getty Images)
US News

A national shortage of truck drivers is worsening shipping bottlenecks that have created waiting lines for freighters at backlogged U.S. ports in recent weeks. The most recent study from the American Trucking Association (ATA) says the nation is short more than 60,000 drivers, and CNN reports ATA president and CEO Chris Spear says that number has now increased to 80,000.

The association estimates 71.4 percent of all U.S. freight tonnage is moved on the nation’s highways.

“One of the challenges—and any of the people who are writing these reports will tell you this—is that the volume is so far up from a year ago, and even before that, there’s record volume of goods,” Psaki said on Oct. 20 while traveling aboard Air Force One.

She added that what was needed was an increase in capacity and the ability to move goods “beyond what has happened in the past.”

“So that’s why we’re working on it at every step in the process.”

Psaki has also said the number of commercial driver’s licenses issued has increased from last year.

According to the White House, an average of 50,000 commercial driver’s licenses and learner’s permits have been issued each month in 2021—60 percent higher than the 2020 numbers.

Current truck size and weight standards are a blend of federal and state regulations and laws. The federal limits that Biden’s order would lift are 80,000 pounds gross vehicle weight, 20,000 pounds on a single axle, and 34,000 pounds on a tandem axle group, according to the Federal Highway Administration.

This latest move from the Biden administration comes a week after the Port of Los Angeles announced it would move to a 24/7 service to address its backlog—a step the Port of Long Beach had made several weeks prior. Those two ports move about 40 percent of all U.S. imports and 25 percent of the country’s exports, according to the White House.

The port announcement on Oct. 13 came alongside announcements from a list of businesses, including Walmart, UPS, and FedEx, saying they will also be moving to a 24/7 operating schedule.

Union Pacific Railroad announced on Oct. 19 it would serve the ports of Los Angeles and Long Beach and would also operate 24/7.

Psaki noted “progress” at the ports on Oct. 19, announcing that the port of Los Angeles executive director Gene Seroka said the amount of cargo that is sitting on the docks for 13 days or longer has been cut in half.

Data from the Marine Exchange  shows about 157 ships were waiting off the two ports in Southern California as of Oct. 18—100 ships were at anchor and 57 at berths.

Supply-chain shortages and a resulting increase in inflation rates are being felt across industries. A report from the Department of Labor released on Oct. 13 found that U.S. consumer prices in September accelerated at their fastest annual rate in 13 years, noting an increase in cost for products like food and gasoline.

The Federal Reserve last month predicted a 2021 inflation rate of 4.2 percent, well above its 2 percent target.